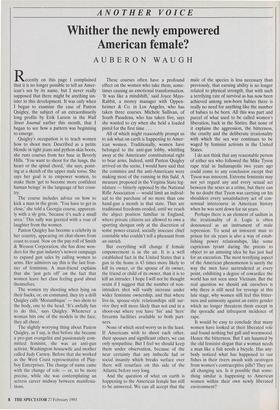 Whither the newly empowered American female?

Recently on this page I complained that it is no longer possible to tell an Amer- ican's sex by its name, but I never really supposed that there might be anything sin- ister in this development. It was only when I began to examine the case of Paxton Quigley, the subject of an extraordinarily long profile by Erik Larson in the Wall Street Journal earlier this month, that I began to see how a pattern was beginning to emerge.

Quigley's occupation is to teach women how to shoot men. Described as a petite blonde in tight jeans and python-skin boots, she runs courses from her base in Beverly Hills. 'You want to shoot for the lungs, the heart or the spinal chord,' she says, point- ing at a sketch of the upper male torso. She says her goal is to empower women, to make them 'get to become more confident human beings' in the language of her coun- try.

The course includes advice on how to kick a man in the groin. 'You have to get in close,' she told a Georgia course, apparent- ly with a sly grin, 'because it's such a small area.' This sally was greeted with a roar of laughter from the women.

Paxton Quigley has become a celebrity in her country, appearing on chat-shows from coast to coast. Now on the pay-roll of Smith & Wesson Corporation, she has done won- ders for the gun industry's newest campaign to expand gun sales by calling women to arms. Her admirers say this is the last fron- tier of feminism. A man-friend explains that she 'just gets off on the fact that women leave her class feeling good about themselves.

The women try shooting when lying on their backs, or, on command, they try a drill Quigley calls 'Mozambique' — two shots to the body, one to the head. 'It's awfully fun to do this,' says Quigley. Whenever a woman hits one of the models in the face, they all cheer.

The slightly worrying thing about Paxton Quigley, as I say, is that before she became a pro-gun evangelist and passionately com- mitted feminist, she was an anti-gun activist, Washington housewife and mother called Judy Carnoy. Before that she worked as the West Coast representative of Play- boy Enterprises. The change of name came with the change of role — or, to be more precise, while she was contemplating an actress career midway between manifesta- tions. These courses often have a profound effect on the women who take them, some- times causing an emotional transformation. `It was like a mindshift,' said Joyce Mays- Rabbit, a money manager with Oppen- heimer & Co. in Los Angeles, who has taken three courses. Michele Sullivan, of South Pasadena, who has taken five, says she wanted to cry when she held a loaded pistol for the first time . . .

All of which might reasonably prompt us to ask what on earth is happening to Amer- ican women. Traditionally, women have belonged to the anti-gun lobby, whittling away at the Americans' constitutional right to bear arms. Indeed, until Paxton Quigley arrived on the scene, I would have said that the commies and the anti-Americans were making most of the running in this field. A measure proposed in the Virginia State leg- islature — bitterly opposed by the NatiOnal Rifle Association — would limit an individ- ual to the purchase of no more than one hand-gun a month in that state. Thus are traditional freedoms eroded, until we reach the abject position familiar in England, where private citizens are allowed to own a sporting shotgun only at the discretion of some power-crazed, socially insecure chief constable who couldn't tell a pheasant from an ostrich.

But everything will change if female empowerment is in the air. It is a well established fact in the United States that a gun in the home is 43 times more likely to kill its owner, or the spouse of its owner, the friend or child of its owner, than it is to kill an intruder. I hope I will not be thought sexist if I suggest that the number of non- intruders shot will vastly increase under wider feminine ownership, and that where live-in, spouse-style relationships still sur- vive they will more likely than not end in a shoot-out where you have 'his' and 'hers' firearms facilities available to both part- ners.

None of which need worry us in the least. If Americans wish to shoot each other, their spouses and significant others, we can only sympathise. But I feel we should keep them under observation, because of the near certainty that any imbecile fad or social insanity which breaks surface over there will resurface on this side of the Atlantic before very long.

And the question of what on earth is happening to the American female has still to be answered. We can all accept that the male of the species is less necessary than previously, that earning ability is no longer related to physical strength, that with such a terrifying rate of survival as has now been achieved among new-born babies there is really no need for anything like the number of babies to be born. All this was part and parcel of what used to be called women's liberation, back in the Sixties. But none of it explains the aggression, the bitterness, the cruelty and the deliberate irrationality with which the sex war continues to be waged by feminist activists in the United States.

I do not think that any reasonable person of either sex who followed the Mike Tyson rape trial in Indianapolis two years ago could come to any conclusion except that Tyson was innocent. Extreme feminists may not yet regard any and every sexual act between the sexes as a crime, but there can be no doubt that Tyson was carrying on his shoulders every unsatisfactory act of con- sensual intercourse in American history when he was sent down for six years.

Perhaps there is an element of sadism in the irrationality of it. Logic is often denounced as an instrument of male repression. To send an innocent man to prison for six years is also a way of estab- lishing power relationships, like some capricious tyrant daring the priests to object to an amusing idea he has just had for an execution. The most terrifying aspect of the American phenomenon is surely the way the men have surrendered at every point, exhibiting a degree of cowardice the world has not seen since Vietnam. But the real question we should ask ourselves is why there is still need for revenge at this late stage, why women still feel this bitter- ness and animosity against an entire gender which no longer threatens them except in the sporadic and infrequent incidence of rape.

It would be easy to conclude that many women have looked at their liberated role and found nothing but gall and wormwood. Hence the bitterness. But I am haunted by the old feminist slogan that a woman needs a man like a fish needs a bicycle. Has any- body noticed what has happened to our fishes in their rivers awash with oestrogen from women's contraceptive pills? They are all changing sex. Is it possible that some- thing similar is happening to American women within their own newly liberated environment?