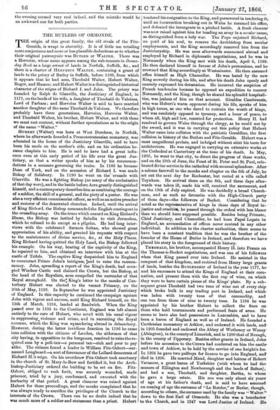 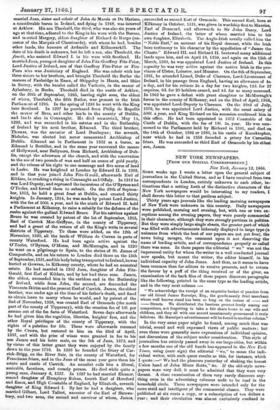 THE BUTLERS OF ORMONDE.

THE origin of this great family, the old rivals of the Fitz- Geralds, is wrapt in obscurity. It is of little use retailing mere conjectures and more or less plausible deductions as to whether their original patronymic was BUTLER or WALTER. There was a Herveius, whose name appears among the sub-tenants in Domes- day Book as a large owner of lands in Norfolk, Suffolk, &c., and there is a charter of IIERVEIUS WALTER, containing a grant of lands to the priory of Maley in Suffolk, before 1189, from which it appears that he had sons, Theobald Walter, Hubert Walter, Roger, and Hamon; and Hubert Walter is a distinguished historical character of the reigns of Richard I. and John. The priory was founded by Ralph de Glanville, the Justiciary of England, in 1171, on the lands of his wife, a daughter of Theobald de Valoines, Lord of Parham ; and Herveius Walter is said to have married another daughter of the same Theobald de Valoines. We therefore probably have three generations, Herveius, Herveius Walter, and Theobald Walter, his brother, Hubert Walter, and with these we must rest content, without further speculations as to the origin of the name "Walter."

HUBERT (Walter) was born at West Dereham, in Norfolk, where he afterwards founded a Premonstratenaian monastery, was educated in the house of the Justiciary Glanville, said to have been his uncle on the mother's side, and on his ordination be- came chaplain to him. He is said to have had a great influ- ence even at this early period of his life over the great Jus- ticiary, so that a writer speaks of him as by his recommen- dations in a measure governing the realm. In 1186 he became Dean of York, and on the accession of Richard I. was made Bishop of Salisbury. In 1190 he went on the'-crusade with Glanville. He was a fighting Bishop (as many of the ecclesiastics of that day were), and in the battle before Acre greatly distinguished himself, and a contemporary describes him as combining the courage of a soldier, the skill of a general, and the piety of a pastor. He was also a very efficient commissariat officer, as well as an active preacher and restorer of the desecrated churches. Indeed, until the arrival of King Richird, the Bishop commandedthe English contingent in the crusading army. On the truce which ensued on King Richard's illness, the Bishop was invited by Saladin to visit Jerusalem, which he refused to do except as a pilgrim. He had long inter- views with the celebrated Saracen Sultan, who showed great appreciation of his ability, and granted his requests with respect to the maintenance of divine service, &c., at the Holy Places. King Richard having quitted the Holy Land, the Bishop followed his example. On his way, hearing of the captivity of the King, he repaired to him, and obtained an interview with him at the castle of Trifels. The captive King despatched him to England to counteract Prince John's intrigues, :and to raise the ransom- money. John, spreading a report of the King's death, had occu- pied Windsor Castle and claimed the Crown, bat the Bishop, at the head of the Royalists, soon compelled the surrender of that Royal stronghold. On the; King's letter to the monks of Can- terbury Hubert was elected to the vacant Primacy, on the 30th of May, 1193. In September he was appointed Justiciary of England. In this capacity he continued the campaign against John with vigour and success, until King Richard himself, on the 13th of March, 1194, landed at Sandwich. When the King passed over in 1195 to the Continent, England was left almost entirely to the care of Hubert, who acted with his usual vigour in suppressing. violence and crime, and in recruiting the Royal revenue, which the King was squandering abroad in debauchery. However, during the latter invidious function in 1196 he came into collision with the citizens of Loadon, the aldermen of that city having, in opposition to the burgesses, resolved to raise the re- quired sum by a poll-tax—a personal tax—rich and poor to pay alike. The citizens found a leader in William Fitz-Osbert—sur- named Longbeard —a sort of forerunner of the Lollard democrats of Richard H.'s reign. On his overthrow Fitz-Osbert took sanctuary in the church of St. Mary-le-Bow and fortified it, but the Arch- bishop-Justiciary ordered the building to be set on fire. Fitz- Osbert, obliged to rush forth, was severely wounded, made prisoner, tried by a jury, condemned, and executed with the barbarity of that period. A great clamour was raised against Hubert for these proceedings, and the monks complained that he was always ready to sacrifice the privileges of the Church to the interests of the Crown. There can be no doubt indeed that he was much more of a soldier and statesman than a priest. Hubert

tendered his resignation to the King, and persevered in tendering it, until an insurrection breaking out in Wales he resumed his office,

and defeated the insurgents in a pitched battle. A fresh clamour- was now raised against him for heading an army in a secular cause, as distinguished from a holy war. The Pope enjoined Richard,

on peril of his soul, to remove the Archbishop from secular employments, and the King accordingly removed him from the Justiciaryship. He was soon afterwards summoned abroad and employed by Richard in diplomatic negotiations, and he was ia• Normandy when the King met with his death, April 6, 1199. He then declared himself in favour of John's pretensions, and he crowned that King accordingly at Westminster. He then assumed office himself as High Chancellor. He was hated by the new King secretly during his life, and after his death John openly and coarsely expressed his detestation. He incurred the suspicion of French tendencies because he opposed an expedition to recover. Normandy, and the King, though he shared his splendid hospitali- ties, was jealous of him on that account. Gimldus Cambrensis, who was Hubert's warm opponent during his life, speaks of him in high terms, as one who dared to restrain the wrath of kings, and was resolutely opposed to tyranny, and a lover of peace, to whom all, high and low, resorted for protection. Henry U. had resolved to govern Wales through the clergy, as he could not by the sword, and it was in carrying out this policy that Hubert Walter came into collision with the patriotic Geraldine, the first collision in history of the Butlers and Fitz-Geralds. Hubert was a • most magnificent prelate, and indulged without stint his taste for architecture. He was engaged in carrying on extensive works at the Cathedral at Canterbury at the time of his death. In May, 1205, he went to that city, to direct the progress of these works, and on the 29th of June, the Feast of St. Peter and St. Paul, cele- brated divine service in the cathedral with unusual splendour. After a solemn farewell to the monks and chapter on the 6th of July, he set out the next day for Rochester, but rested at a ville called Teynham. He arrived there on the 8th, and three days after- wards was taken ill, made his will, received the sacrament, and on the 13th of July expired. He was decidedly a broad Church-

man, and as such no favourite with the High-Church party-

of those days—the followers of Becket. Considering that he acted as the repreSentative of kings in those days of Royal in- justice and crueltiek he passed through the ordeal with less blame than we should have supposed possible. Besides being Primate, Chief Justiciary, and Chancellor, he had been Papal Legate in England, an accumulation of offices never centred in any other individual. In addition to the charter authorities, there seems to have been a constant tradition that he was the brother of the founder of the House of Butler in Ireland, and therefore we have placed his story in the foreground of their history.

THEOBALD, his brother, accompanied Henry IL into France on the Thomas-h-Becket negotiations, and was one of his followers when that King passed over into Ireland. He assisted in the conquest of that kingdom, and received from Henry large grants of lands, besides the BUTLERSHIP of Ireland in the year 1177, he and his successors to attend the Kings of England at their coro- nation, and present them with the first cup of wine, on which they were to have certain pieces of the Kings' plate. By a sub- sequent grant Theobald had two tuns of wine out of every ship which broke bulk in any trading port in Ireland, and which

succeeded as second Earl of Ormonde. This second Earl, born at Kilkenny in October, 1331, was given in wardship first to Maurice, Earl of Desmond. and afterwards to Sir John Darcy, Lord Justice of Ireland, the latter of whom married him to his own daughter, Elizabeth. The Anglo-Irish usually called him the " Noble Earl," on account of his Royal descent, while the Irish bore testimony to his character by the appellation of "James the Chaste." Edward III. and Richard II. bestowed many additional lands upon him, and on April 18, 1359, and again on the 15th of March, 1360, he was appointed Lord Justice of Ireland. In this capacity he was very active against the native Irish in the pro- vinces of Ulster, Leinster, and Munster. On the 8th of September, 1361, he attended Lionel, Duke of Clarence, Lord-Lieutenant of Ireland, in his passage from England, having an allowance of 4s. a day, and for his retinue 2s. a day for two knights, 12d. for 27 esquires, 6d. for 20 hobilers armed, and 4d. for as many unarmed. In 1362 he gave a defeat with great slaughter to McMurragh's forces in the county of Kilkenny, and on the 22nd of April, 1364, was appointed Lord-Deputy to Clarence. On the 23rd of July, 1376, he was appointed Lord Justice, with the usual salary of 5001. a year, and King Richard on his accession confirmed him in this office. He had been appointed in 1372 Constable of the Castle of Dublin, with the fee of 181. 5s. year. He was sum- moned to the Parliament held by Richard in 1381, and died on the 18th of October, 1382 or 1383, in his castle of Knocktopher, near which he had in 1356 founded a priory for Carmelite friars. He was succeeded as third Earl of Ormonde by his eldest son, James.