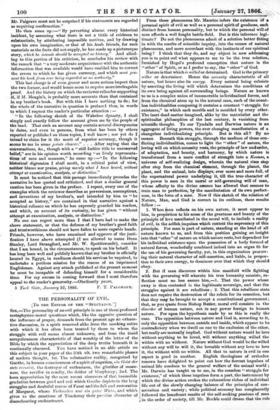 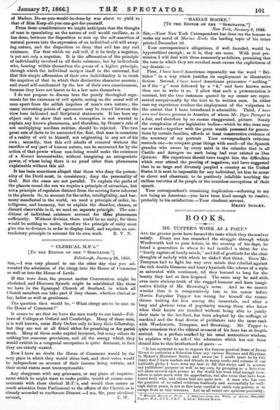 THE PERSONALITY OF EVIL.

LTO THE EDITOR OF THE "SPECTATOR.']

SIR,—The personality of an evil principle is one of those profound metaphysico-moral questions which, like the opposite question of the influence of prayer, demands from the present age an exhaus- tive discussion, in a spirit removed alike from the mocking satire with which it has often been treated by those to whom the struggle with evil seems almost unknown, and from the timid scrupulousness characteristic of that worship of the letter of the Bible by which the appreciation of the deep truths beneath it is continually obscured. You have noticed in an able article on this subject in your paper of the 30th ult. two remarkable phases of modern thought, 1st. The substantive reality, recognized by Goethe, in human consciousness of a spirit of negation, sin Geist der stets rerneint, the destroyer of enthusiasm, the glorifier of mean- ness, the reveller -in cruelty, the deifier of blasphemy; 2nd. The keen appreciation by the most recent observers of that insensible gradation between good and evil which Goethe depicts in the long struggles and doubtful rescue of Faust and the fall and restoration of Margaret, whose Verbrechen war ein guter Wolen, and which gives to the creations of Thackeray their peculiar character of disenchanting enchantment. Mr. Palgrave must not be surprised if his statements are regarded From these phenomena Mr. Maurice infers the existence of a as requiring confirmation." personal spirit of evil as well as a personal spirit of goodness, each

He then sums up :—" By perverting almost every historical distinct from human personality, but to which the personal will of man affords a well fought battle-field. But is this inference legi- timate? Do not the phenomena admit of a solution better fitting in with the results of scientific inquiry, into the causes of natural phenomena, and more accordant with the instincts of our spiritual being? I think that they do, and my object in now addressing you is to point out what appears to me to be the true solution, furnished by Hegel's profound conception that nature is the "other" of Spirit, or as I prefer to say, the "other" of God. Nature is that which is willed or determined. God is the primary wilier or determiner. Hence the necessity characteristic of all nature, but hence also its energy. Every natural being subsists by asserting the living will which determines the conditions of its own being against all surrounding beings. Nature as known to us is a complex union of innumerable individualized forces, and

from the chemical atom up to the natural man, each of the count- less individualities composing it sustains a constant " struggle for existence," in which each moulds and is moulded by every other. The inert dead matter imagined, alike by the materialist and the spiritualist philosophies of the last century, is vanishing from scientific thought. To our Tyndalls and Darwina nature is an aggregate of living powers, the ever changing manifestation of a changeless individualizing principle. But is this all ? By no means. Beneath this struggle, through the medium of these con- flicting individualities, comes to light the " other " of nature, the loving will on which necessity rests, the principle of law andorder, of adaptation, and beauty, and harmony, by which nature is transformed from a mere conflict of strength into a 'Cosmos, a universe of self-realizing design, wherein the natural rises step after step from the chemical element, through the planet, the plant, and the animal, into displays, ever more and more full, of the supernatural power underlying it, till the true character of this power is seen in the moral or self-governing will of man, whose affinity to the divine essence has allowed that essence to train man to perfection, by the manifestation of its own perfect- ness, in the form of a man. Now if this sketch of the relation of Nature, Man, and God is correct in its outlines, these results follow : -

1. When inan reflects on his own nature, it must appear to him, in proportion to his sense of the greatness and beauty of the principle of love manifested in the moral will, to include a reality of evil, in the seAfishimpulses which contest the supremacy of this principle. For man is part of nature, standing at the head of all nature known to us, and from this position gaining an insight into that "other" of nature on which nature rests, but dependent for his individual existence upon the possession of a body formed of natural forces, wonderfully combined indeed into an organ fit for the use of his governing faculty, yet, in this organization preserv- ing their natural character of self-assertion, and liable, in propor- tion to their own energy, to domineer over that which they should obey.

2. But if man discovers within him manifold wills fighting with the governing will wherein his true humanity consists, re- flection must no less assure him,-1. That the power whose sway is thus contested is the legitimate sovereign, and that the struggles against it are rebellious ; 2. That this rebellious state does not require the destruction of the rebels for its cessation, but that they may be brought to accept a constitutional government ; that, as you quote from Bishop Butler, moral evil consists in the disorder of human nature, not in any power foreign to human nature. For upon the hypothesis made by us this is really the case. The opposition between nature and God is, according to it, only the opposition between outside and inside, which appear to be contradictory when we dwell on one to the exclusion of the other, but really are mutually implied. God without nature would be love without anything to be loved, will without anything willed the within with no without. Nature without God would be the willed without any will to will it, the loveable without any love to love it, the without with no within. All that in nature is evil in one aspect is good in another. English theologians of orthodox renown have delighted to point out how the fiercest impulses of animal life conduce to the general welfare of the animal world ; Mr. Darwin has taught us to see, in the ceaseless "struggle for existence," of which these impulses form a part, the instrument by which the divine action evokes the exhaustless riches of individual life out of the slowly changing balance of the principles of con- servation and variety ; while political economy has complacently followed the beneficent results of the self-seeking passions of man i in the order of society, till Mr. Buckle could dream that the rule of Madam. Do-as-you-would-be-done-by was about to yield to that of Miss Keep-all-you-can-get-for-yourself.

From these considerations we might anticipate that the thought of man in speculating on the nature of evil would oscillate, as it has done, between the disposition to sum up the self-assertion of natural powers into the expression of an individual evil will sway- ing nature, and the disposition to deny that evil has any real existence. For that which we call evil, if it be truly a negation, is yet not only a negation. It is the affirmation of the principle of individuality involved in all finite existence, but by individuals who, bearing within themselves the germs of a higher principle, through which the individual merges itself in the universal, feel that this simple affirmation of their own individuality is in truth the negation of that in which their distinctive character consists ; and stand self-condemned by the law of their own consciousness, because they have not learnt to be a law unto themselves.

I do not propose to discuss here the purely theological argu- ments for the existence of evil spirits acting on the moral will of man apart from the selfish impulses of man's own nature ; the many interesting points of agreement may be traced between the view here indicated and Scriptural statements. It has been my object only to show that such a conception is not wanted to explain any known phenomena, and therefore, by Occam's rule of not multiplying needless entities, should be rejected. The two great sets, of facts to be amounted for, first, that man is conscious of a reality of evil in himself, not originating in any act of his own ; secondly, that this evil admits of removal without the sacrifice of any part of human nature, can be accounted for by the action of that power whose non-being would make the existence of a Kosmos inconceivable, without imagining an antagonistic power, of whose being there is no proof other than phenomena explainable without this aid.

It has been sometimes alleged that those who deny the person- ality of the Devil must, in consistency, deny the personality of God. But the cases are not parallel. To explain the paths of the planets round the sun we require a principle of attraction, but note, principle of repulsion distinct from the moving force inherent in the planed. So, to account for the order, intelligibility, and har- mony manifested in the world, we need a principle of order, in- telligence, and harmony, but to explain the disorder, chance, or discord observable in it, we need no separate princVe. The con- ditions of individual existence account for th& phenomena sufficiently. Without division there could be no unity, for there would be nothing to unite, therefore the principle of unity must give rise to division in order to display itself, and requires no con-

tradictory principle to account for its own work. E. V. N.