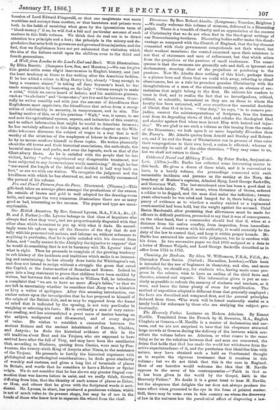 really welcome this volume of sermons, delivered in a Dissenting pulpit. There is a breadth of charity and an appreciation of the essence of Christianity that we do not often find in the theological writings of our Nonconforming brethren. Dissenting bodies suffer under this disad- vantage as compared with the_Church of England, that the lay element connected with their government comprehends not their wisest, but their weakest members ; the control exercised upon their ministers is not that of statesmen and men of refinement, but that which arises from the prejudices or the passions of small tradesmen. The conse- quence is that the sermons are generally safe and dull, or ignorant and declamatory, steering clear of the prejudices or pandering to the passions. Now Mr. Ainslie does nothing of this kind ; perhaps there is a phrase here and there that we could wish away, referring to ritual observances, but as a rale he preaches genuine Christianity with the thoughtfulness of a man of the nineteenth century, an absence of sec- tarianism that might belong to the first. He exhorts his readers to trust in God, and to realize the fact that no investigations, critical, ethical, or scientific, incumbent as they are on those to whom the faculty has been entrusted, will ever overthrow the essential doctrine of Christy that God is love. "Our duty," he says, " is to remove pre- judice, correct the misinterpretations of Scripture, free the human soul from its degrading views of God, and rebuke the theological libel and slander against God when men invest Him with hatred and injus- tice." We are glad to see such a volume as this issuing from the ranks of the Dissenters; we look upon it as more hopefully Eirenikon than Dr. Pusey's. Mr. Ainslie quotes from Arnold and Stanley and Robert- son, and if he and the Dean of Westminster can in process of time raise their congregations to their own level, a union is effected; whereas it may assuredly be said of the older churches, "They may come to us, but we shall not return to them."