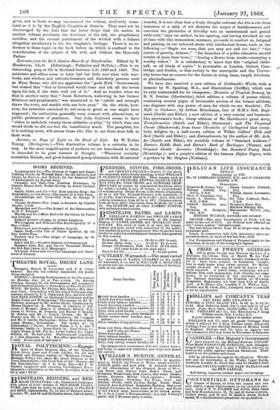 Page 24, 27 January 1866 — Extracts from the Kirk Session Records of Dunfermline. Edited by
Close

Extracts from the Kirk Session Records of Dunfermline. Edited by

E. Henderson, LL.D. (Edinburgh : Fullarton and McNab.)—This is an interesting peep at life in Scotland between A.D. 1640 and 1689. The ministers and elders seem to have had but little rest what with war- locks, and witches, and sabbath-breakers, and disorderly persons such as Myse Bonar, who did not appreciate the " gude Kirk" Government, but wished that " God or Cromwell would come and tak all the towne Upon his bak, if she were well out of it." And no wonder, when we find in another entry that " Janet Robertson, wallowing in her former filthiness and prophanatie," was sentenced to be " cairtit and scourgit throw the town, and markit with ane hote yron." On the whole, how- ever, the severities exercised do not seem so great as one might have supposed ; the authorities generally were content with admonitions, or pilblic professions of penitence. One John Crafoord seems to have "Bitten in sackcloth twenty-three sabbaths, or yrby," by which time one would think he did not feel the humiliation much. The pamphlet, for it is nothing more, will amuse those who like to see these dour folk at their work.