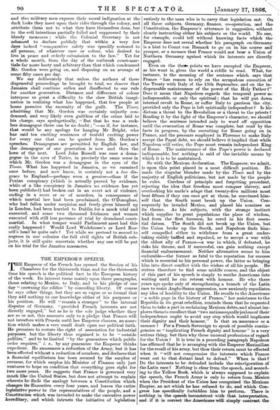 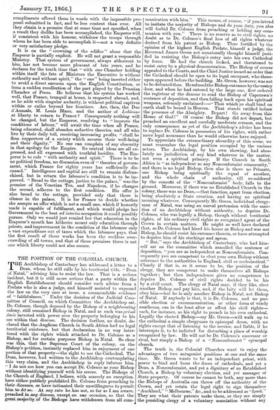 /rade, Emperor of the French has opened the Session of his Chambers for the thirteenth time, and for the thirteenth time his speech is the political fact in the European history of the week. Its interest turns mainly upon three paragraphs, those relating to Mexico, to Italy, and to his pledge of one day " crowning the edifice " by conceding. liberty. Of course he says other things, but they are so vague or so formal that they add nothing to our knowledge either of his purposes or his position. He will "remain a stranger" to the internal disputes of Germany, "provided French interests are not directly engaged," but as he is the sole judge whether they are so or not, this amounts only to a pledge that France will not interfere with Prussia until her Emperor chooses, an asser- tion which makes a very small draft upon our political faith. He promises to restore the right of association for industrial purposes, but the liberty thus regained is to be " outside polities," and to be limited " by the guarantees which public order requires," i. e., by any guarantee the Emperor thinks expedient. He announces a reduction of the Army, but it has been effected without a reduction of numbers, and declares that a financial equilibrium has been secured by the surplus of revenue, for which surplus his Minister of Finance only just ventures to hope on condition that everything goes right for two more years. Ho suggests that France is governed very much like the United States, but does not attempt to explain wherein he finds the analogy between a Constitution which changes its Executive every four years, and leaves the entire legislative power to the representatives of the people, and a Constitution which was intended to make the executive power hereditary, and which intrusts the initiative of legislation entirely to the man who is to carry that legislation out. On all these subjects, Germany, finance, co-operation, and the Constitution, the Emperor's utterance is suggestive, without clearly instructing either his subjects or the world. No one, for example, could tell without knowing facts which the. Emperor does not reveal whether his paragraph out Germany is a hint to Count von Bismark to go on in his course and' prosper, or a menace that France would not bets- a Union of Northern Germany against which its interests are directly- engaged.

Even on the three points we have excepted the Emperor, as his Wont is, gives the world a riddle to read. What, for• instance, is the meaning of the sentence which says that France "has reason to rely on the scrupulous execution of- the Treaty with Italy .i.f the 15th September, and on the in-- dispensable maintenance of the power of the Holy Father ?" Does it mean that Napoleon regards the temporal power as: indispensable, or only the spiritual ; that he will put down, internal revolt in Rome, or suffer Italy to garrison the city, provided only the Pope is left spiritually independent ?' Is his' dictum a threat to the Revolution or a threat to the priests ? Reading it by the light of the Emperor's character, we should believe the sentence intended only to ward off opposition until the evacuation of Rome was complete, but read by the facts in progress, by the recruiting for Rome going on in France, and the pressure employed in Florence to make Italy accept the Papal debt, we should believe it implied that while Napoleon will retire, the Pope must remain independent King- of Rome. The maintenance of the Pope's power is declared indispensable, but nothing is said of the invisible means by which it is to be maintained.

So with the Mexican declaration. The Emperor, we admit,_ is upon this point placed in a most difficult position. He- made the singular blunder made by the Times and by the- majority of English politicians, but not made by the people- he rules. Careless of principle and forgetting precedent, rejecting the idea that freedom must conquer slavery, and overlooking his uncle's adage that twenty-five millions must beat fifteen if they can once get at them, he convinced him- self that the South must break up the Union. Con- sequently he invaded Mexico, and placed his nominee on its throne. As his subjects, with the strange instinct which supplies to great populations the place of wisdom, had from the . first foreseen, he erred in his first essen- tial datum. The South did not break up the Union, but the Union broke up the South, and Napoleon finds him- self compelled either to withdraw from a great under- taking visibly baffled and repulsed, or to accept a war with the oldest ally of France—a war in which, if defeated, he risks his throne, and if successful, can gain nothing except financial embarrassment. Neither alternative seems to him endurable—the former as fatal to the reputation for success which is essential to his personal power, the latter as bringing him into direct conflict with the wishes of all his people. He strives therefore to find some middle course, and the object of this part of his speech is simply to soothe Americans into waiting until he can retreat with honour. He who three years ago spoke only of strengthening a branch of the Latin race to resist Anglo-Saxon aggression, now anxiously repudiates. any idea of hostility to the Union. He recalls to the Americans " a noble page in the history of France," her assistance to the Republic in its great rebellion, reminds them that he requested them to take a part in reclaiming Mexican debts, and almost im- plores them to recollect that "two nations equally jealous of their independence ought to avoid any step which would implicate- their dignity and their honour." Is that an assurance or a menace ? For a French Sovereign to speak of possible contin- gencies as "implicating French dignity and honour" is a very serious thing, but then why these unusual professions of regard for the Union ? It is true in a preceding paragraph Napoleon has affirmed that he is arranging with the Emperor Maximilian for the recall of his army, but then their return must be effected when it "will not compromise the interests which France went out to that distant land to defend." When is that? Do the interests to be defended include the reinvigoration of the Latin race ? Nothing is clear from the speech, and accord- ing to the Yellow Book, which is always supposed to explain the speech, the French Army is only to return from Mexico. when the President of the Union has recognized the Mexican Empire, an act which he has refused to do, and which Con- gress has specifically forbidden him to perform. There is nothing in the speech inconsistent with that interpretation, and if it is correct the Americans will simply contrast the compliments offered them in words with the impossible pro- posal submitted in fact, and be less content than ever. All they obtain is a promise that at some time not specified, when a result they dislike has been accomplished, the Emperor will, if consistent with _his honour, withdraw the troops through whom he has been able to accomplish it—not a very definite or very satisfactory pledge.

It is on the " crowning of the edifice " alone that the Emperor is partially explicit. He will not grant a responsible Ministry. That system of government, always abhorrent to him, has not become more pleasant of late years, and he declares for the tenth time that " with one Chamber holding within itself the fate of Ministers the Executive is without authority and without spirit," the " one" being inserted either to avoid a direct sarcasm upon the English Constitution, or from a sudden recollection of the part played by the Prussian Chamber of Peers. He- believes that his system has worked well, that France, tranquil at home, is respected abroad, and, as he adds with singular audacity, is without political captives within or exiles beyond her frontiers. Are, then, the Due d'Aumale, M. Louis Blanc, and the author of Labienus at liberty to return to France ? Consequently nothing will be changed, but the Emperor, resolving to " improve the conditions of labour," will await the time when all France, being educated, shall abandon seductive theories, and all who live by their daily toil, receiving increasing profits, "shall be firm supporters of a society which secures their well-being and their dignity." No one can complain of any obscurity in that apology for the Empire. Its central ideas are all ex- pressed, and all expressed with truthful lucidity. The Em- peror is to rule " with authority and spirit." There is to be no political freedom, no discussion even of " theories of govern- ment, which France for eighty years has sufficiently dis- cussed." Intelligence and capital are still to remain disfran- chised, but in return the labourer's condition is to be im- proved. " Bread to the cottage, justice to the palace," was the promise of the Venetian Ten, and Napoleon, if he changes the second, adheres to the first condition. His offer .is also bread to the cottage, provided only that there is silence in the palace. It is for France to decide whether she accepts an offer which is not a small one, which if honestly made is capable of fulfilment, and which would pledge her Government to the best ad interim occupation it could possibly pursue. Only we would just remind her that education in the Emperor's mouth has hitherto meant only education through priests, and improvement in the condition of the labourer only a. vast expenditure out of taxes which the labourer pays, that the first result of these works has been the reckless over- crowding of all towns, and that of these promises there is not one which liberty could not also secure.