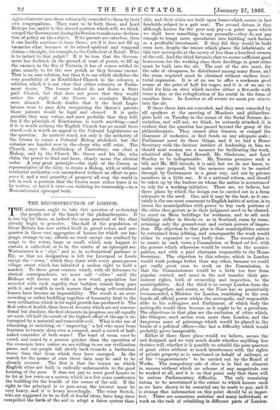 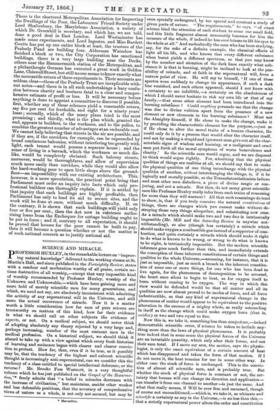 THE statesmen ought to take this question of re-housing the people out of the hands of the philanthropists. It is too big for them, as indeed the more practical of the class already begin to perceive. One-half of the population of Great Britain has now settled itself in paved towns, and one- quarter in those vast aggregates of houses for which our lan- guage, strange to say, affords no word except one confined by usage to the towns, large or small, which may happen to contain a cathedral, or to be the centre of an episcopal see. Westminster is a " city," and so in ecclesiastical parlance is Ely, so that no designation is left for Liverpool or Leeds except the " town," which they share with every grass-grown village street which has inherited a useless right to hold a market. To these great centres, which, with all deference to clerical correspondents, we must call " cities " until the Bishops will favour us with a new word, population has accreted with such rapidity that builders cannot keep pace with it and wealth in such masses that cheap self-contained houses have become an impossibility. The result is an over- crowding or rather huddling together of humanity fatal to the very civilization which in its rapid growth has produced it. The first rules of health, those laws of decency which are not conven- tional but absolute, the first elements in progress, are all equally set aside, till half the result of the highest effort of the age is in- tercepted by a material and removable evil. What is the use of educating, or enriching, or " improving " a lad who must from fourteen to twenty sleep over a cesspool, amid a crowd of half- naked comrades of both sexes ? The want of room must be cured, and cured by a process quicker than the operation of the economic laws, unless we are willing to see our civilization pause, and our people fall slowly back towards a barbarism worse than that from which they have emerged. In the search for the means of cure three data may be said to be already secured. The first is that the tenure on which English cities are built is radically unfavourable to the good housing of the poor. It does not pay to erect good houses to be let at low rents on a system which in a few years confiscates the building for the benefit of the owner of the soil. If the right to the principal is to pass away, the interest must be very heavy, and it is heavy accordingly. The wiser Scotch, who are supposed to be so full of feudal ideas, have long since compelled the lords of the soil to adopt a fairer system than this, and their cities are built upon leases which create in fact freeholds subject to a quit rent. The second datum is that although houses for the poor may pay—a point upon which we shall have something to say presently—they do not pay enough to tempt mere speculators into building such houses as a profitable investment. If they did they would be built even now, despite the tenure which places the inhabitants of this vast metropolis at the mercy of less than a hundred owners of the soil. And the third datum is, that to secure sufficient good houseroom for the working class their dwellings in great cities must be built into the air. The cod of the site must, for the sake of cheapness, be distributed among many floors, ani the room required must be obtained without endless terri- torial expansion. It is of no use to offer a workman gold rooms at the price'of half his wages, and it is of no use to build for him on sites which involve either a five-mile walk twice a day, or the reduplication of his rental in the form of omnibus fares. In London at all events we must put streets into the air.

If these three data are conceded, and they were conceded by all speakers at the meeting of Members and philanthro- pists held on Tuesday in the rooms of the Social Science As- sociation, and will not, we think, be seriously attacked, it is evident that the question has passed beyond the grasp of the philanthropists. They cannot alter tenures, or compel the clearance of rookeries, or find funds on any adequate scale ; Parliament must do those things, and if we had a Home Secretary with the faintest instinct of leadership in him we should next session see a measure for facilitating the work, admitted alike by Earl Russell, Mr. Gladstone, and Lord Stanley to be indispensable. Mr. Torrens promises such a bill, and Mr. Mill intends, it is said, but we do not know, to make some proposal, but the measure ought to be carried through by Government in a great way, and not by private members in a little one. It is a national reform, and should be taken up by the leaders on whom the nation is accustomed to rely for a working initiative. There are, we believe, but three plans by which the design can be carried out in a form adequate to the need. One, and it may be the best, as it cer- tainly is the one most consonant to English habits of action, is to invest the municipalities with power to buy such portions of the cities they govern as in their judgment need to be cleared, to erect on diem buildings for workmen, and to sell such buildings either in blocks or, as in Scotland, room by room, retaining only the ground-rent and certain powers of inspec- tion. The objection to that plan is that municipalities cannot be restrained from jobbing, and consequently the work would either be expensive or very badly done. The second plan is to create in each town a Commission or Board ad hoc, with the powers which otherwise would be vested in the munici- palities, and with a paid chairman responsible to the Home Secretary. The objection to this scheme, which in London would work perhaps better than any other, because we could get really great men to work on the Commission, is that the Commissioners would be a little too free from popular control, and must in the end transfer their per- manent rights, both of ownership and inspection, to the municipalities. And the third is to except London from the plan altogether, and create, as the Times has so persistently recommended, a Minister for London, combining in his own hands all official power within the metropolis, and responsible alike to his colleagues and Parliament, of which body the metropolis would then become, as it ought to be, a peculium. The objections to that plan are the exclusion of cities which, like Glasgow, need action even more than London, and the dangerous mass of patronage which would be placed in the hands of a political officer—the last a difficulty which would probably prove insuperable.

Either of these three plans would, we believe, secure the end designed, and we very much doubt whether anything less decisive will, whether it is possible to rebuild the poor quarters of great cities without as much interference with the rights of private property as is sanctioned on behalf of railways, or of the " improvements " to be carried out by the Board of Works. The compulsory sale of sites is in fact an element in success without which no scheme of any magnitude can be worked at all, and it is on that point only that there will be serious Parliamentary difficulty. The only remaining datum to be ascertained is the extent to which houses such as we have shown to be essential can be made to pay, and it is strange that information on this point should be so imper- fect. There are numerous societies and many individuals at work on the task of rebuilding in different parts of London. There is the chartered Metropolitan Association for Improving the Dwellings of the Poor, the Labourers' Friend Society under Lord Shaftesbury, the Marylebone Association, a society of which Dr. Greenhill is secretary, and which has, we are told, done a good deal in East London. Lord Westminster has made some experiments, and Lord Ingestre, and Miss Burdett Coutts has put up one entire block at least, the trustees of the Peabody Fund are building four, Alderman Waterlow has finished a block or two, the City Corporation has sanctioned buildings, there is a very large building near the Docks, others near the Hammersmith station of the Metropolitan, and a philanthropic German has executed a great work in Golden Lane, Chiswell Street, but still no one seems to know exactly what the mercantile return of these experiments is. Their accounts are seldom clear—those of the Peabody Trust are inexplicable with- out notes—and there is in all such undertakings a hazy confu- sion between charity and business fatal to a clear and compre- hensive estimate of profit or loss. It will be necessary before anything is done to appoint a committee to discover if possible, first, whether any of these schemes yield a reasonable return, say five per cent for freeholds, and eight for a ninety years' lease ; secondly, which of the many plans tried is the most promising ; and thirdly, what is the plan which, granted the end, appears to builders, to the workmen, and to the police, to combine the greatest number of advantages at an endurable cost. We cannot help believing that streets in the air are possible, and if they are, if the corridors, for example, can be superseded by broad continuous balconies, without interfering too greatly with light, each tenant would possess a separate house ; and the sense of living in a barrack, which the workmen so much dis- like, would be completely obviated. Such balcony streets, moreover, would be thoroughfares, and allow of supervision much more easily than corridors, while they would also allow the hard-working poor to open little shops above the ground- floor—an impossibility with our existing architecture. This, however, is a mere speculation, the practical point being that Parliament must order an inquiry into facts which only pro- fessional builders can thoroughly explain. If it is settled by that inquiry that such buildings are highly profitable, then Parliament has only to lend its aid to secure sites, and the work will be done at once, without much difficulty. If, on the contrary, it is shown that such buildings,will yield only four or five per cent., then the Act now in existence autho- rizing loans from the Exchequer for cottage building ought to be put in force ; and if, contrary to all expectation, it should be proved that houses for the poor cannot be built to pay, then it will become a question whether or not the matter is of such national concern as to justify national aid.