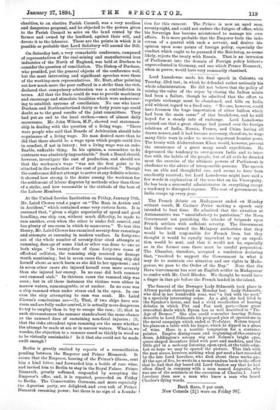 At the United Service Institution on Friday, January 19th, Mr.

Laird Clowes read a paper on "The Ram in Action and in Accident," which contained some very curious facts. It is assumed that, " given a slight superiority of speed and good handling, one ship can, without much difficulty, be made to ram another, even when the other is under full control, and has plenty of sea-room in which to manoeuvre." To test this theory, Mr. Laird Clowes has examined seventy-four rammings and attempts at ramming in modern warfare. In forty-two out of the whole number of seventy-four cited attempts at ramming, damage of some kind or other was done to one or both ships. " In twenty-four of these forty-two cases of -effectual collision, the ramming ship received no damage worth mentioning ; but in seven cases the ramming ship did herself about as much harm as she did to her opponent ; and in seven other cases she injured herself even more severely than she injured her enemy. In no case did both rammer and rammed sink." In thirteen cases the rammed ship was sunk; but in all these instances the victims were either in narrow waters, unmanageable, or at anchor. In no case was a ship rammed when under steam and in the open. In one case the ship attempting to ram was sunk. Mr. Laird Clowes's conclusions are—(1), That, if two ships have sea- room and are fully under control, it is actually more dangerous to try to employ than to try to escape the ram; (2), that in such circumstances the mmmer stands about the same chance as the rammed does of sustaining non-fatal injuries ; (3), that the risks attendent upon ramming are the same whether the attempt be made at sea or in narrow waters. What is, we wonder, the objection to a rammer cased so thickly in wood as to be virtually unsinkable P Is it that she could not be made swift enough ?