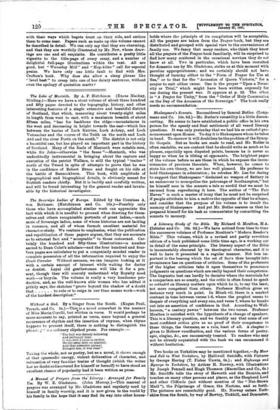 10s. 6d.)—Mr. Butler's versatility is a little discon- certing. He seems to have established a public office in his own person for the speedy and final settlement of all vexed literary questions. It was only yesterday that we had his ex cathedra pro. nouncement upon Homer. To-day it is Shakespeare whom he takes in hand. To-morrow it will doubtless be the problem of the Synop- tic Gospels. But as books are made to read, and Mr. Butler is often readable, we are content that he should write as much as be pleases, especially upon disputed points, because he is never so happy as when he is tilting at opponents. The brightest pages of the volume before us are those in which he exposes the incon- sistencies of previous theorists. When, however, he comes to state his own theory, we are less well pleased. He professes to hold Shakespeare in admiration ; he rebukes Mr. Lee for daring to suggest that Shakespeare " disdaitied no weapon of flattery in an endeavour to monopolise the patronage of Southampton," but he himself sees in the sonnets a tale so sordid that we must be excused from reproducing it here. The author of "The Fair Haven" is such a master of irony that he must not be surprised if people attribute to him a motive the opposite of that he alleges, and consider that the purpose of his volume is to insult the memory of Shakespeare And yet Mr. Butler assures us that he prepared himself for his task as commentator by committing the sonnets to memory.