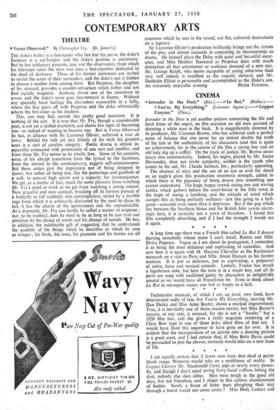 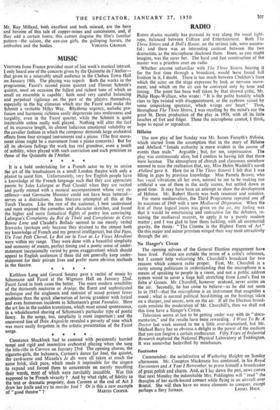 Intruder in the Dust." (Ritz.)—" Le Roi." (Rialtp.)— 16 You're My Everything." (Leicester Square.)—“Copper Canyon." (Plaza.) Intruder in the Dust is yet another picture concerning the life and hard times of the negro, on this occasion an old man accused of shooting a white man in the back. It is magnificently directed by its producer, Mr. Clarence Brown, who has achieved such a perfect ,,, sense of balance that one never for an instant doubts the truth of his tale or the authenticity of his characters (and this is quite an achievement, for in the course of the film a young boy and an old lady dig up a coffin). On the track of justice, Mr. Brown never strays into sentimentality. Indeed, his negro, played. by Mr. Juano Hernandez, does not invite sympathy, neither is the youth who comes to his aid, Mr. Claude Jarman, Jnr., particularly appealing.

The absence of stars and the use of an eye as avid for detail as an eagle's gives this production enormous strength, added to which there is the piquancy of being drawn into something one cannot understand. The huge, happy crowd, eating ices and waving rattles, which gathers before the court-house in the little town in the hope of seeing a lynching, and the attitude of mind which accepts this as being perfectly ordinary—just like going to a ball- game—astounds even more than it depresses. But if the gap which lies between the Southern States and the British Isles yawns alarm- ingly here, it is certainly not a yawn of boredom. I found this film completely absorbing, and if I had the strength I would see it again.

* * * * A long time ago there was a French film called Le Roi S'Amuse starring somebody whose name I can't recall, Raimu and Mlle. Elvira Popescu. Vague as I am about its protagonist, I remember it as being the most delicious and captivating of comedies. And now here it is again with M. Maurice Chevalier as the Ruritanian monarch on a visit to P'aris and Mlle. Annie Ducaux as his former mistress. It is just as delicious, just as captivating, a potpourri of satire, farce and musical comedy. Latterly, France has struck a lugubrious note, but here the tune is in a major key, and all its parts are sung with undiluted gaiety by characters as delightfully amoral as we would have all Frenchmen be. Even to think about Le Roi in retrospect makes one feel as happy as a lark. * * * * Technicolor musicals, of which I am, au fond, very fond, have deteriorated sadly of late, but You're My Everything, starring Mr. Dan Dailey and Miss Anne Baxter, shows a marked improvement. True, it is inevitably one of those success stories, but Miss Baxter's success, at any rate, is unusual, for she is not a "hoofer," but a 1920 film star, and she gives a really exquisite rendering of a Clara Bow type in one of those jerky silent films of that era. I would have liked this sequence to have gone on for ever. It is evident that the incorporation of an actress into a dancing picture is a great asset, and I feel certain that, if Miss Bette Davis could be persuaded to join the chorus, musicals would take on a new lease of life. * * * * I am equally certain that if fewer men were shot dead at point- blank range, Westerns' would take on a semblance of reality. In Copper Canyon Mr. Macdonald Carey pips at nearly every passer- by, and though / don't mind seeing furry-faced ruffians hitting the dust, nobody else does either. Men were tough in the good old days, but not friendless, and I object to this callous abandonment of bodies. Surely a 'brace of bitter tears ploughing their way through a beard would not come amiss ? Miss Hedy Lamarr and

Mr. Ray Milland, both excellent and both miscast, are the hero and heroine of this tale of copper-mines and concessions, and, if they add a certain lustre, this cannot disguise the film's familiar pattern—the saloon, the can-can girls, the galloping horses, the