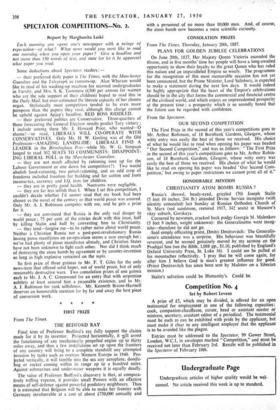 Each morning one opens one's newspaper with a twinge of expectation—of what ? What news would you most like to read one morning when you open your paper? Give a headline and not more than 150 words of text, and state (or let it be apparent) what paper you read.

Some deductions about Spectator readers:— — their preferred daily paper is The Times, with the Manchester Guardian and the Telegraph as runners-up. Alan Wharam would

like to read of his washing-up machine for married undergraduates

in Varsity, and Mrs. S. K. Tortonese (£500 per annum for women who are the sole support of their children) hoped to read this in the Daily Mail, but over-estimated the literate capacity of her chosen organ. Stylistically most competitors tended to be even more pompous than the papers they read, although this charge cannot be upheld against Apjap's headline, RED BOSS RIDDLED.

— their preferred politics are Conservative. Three-quarters of those forecasting the General Election results predict Tory victory • I include among these Mr. J. Howard Price, who wanted-6 shame!—to read, LIBERALS WILL CO-OPERATE WITH CONSERVATIVES. Only Mr. H. W. Gosling was of the Old Profession—AMAZING LANDSLIDE: LIBERALS FIND A LEADER in the Birmingham Post—while Mr. W. G. Simpson longed to read 302 SEATS TO COMMUNISTS: DISAPPOINT- ING LIBERAL POLL in the Manchester Guardian.

— they are not much affected by rationing (one up for the Labour Government or one down for competitors?). Two would abolish food-rationing, two petrol-rationing, and an odd crop of freedoms included freedom for building and for cotton and from income-tax, currency and I.Q. tests for children. - — they are in pretty good health. Nostrums were negligible.

— they are far less selfish than I. When I set this competition, I couldn't decide whether I'd sooner read that my book had been chosen as the novel of the century or that world peace was assured. Only Mr. A. J. Robinson competes with me, and he gets a prize for it.

— they are convinced that Russia is the only real danger to world peace ; 75 per cent. of the entries dealt with this issue, half by killing Stalin and half by converting him to Christianity.

— they tend—forgive me—to be rather naive about world peace. Neither a Christian Russia nor a post-post-revolutionary Russia Issuing pious manifestos on co-operation seems a sure enough bet ; we've had plenty of pious manifestos already, and Christian States have not been unknown to fight each other. Nor did I think much of destroying the atom bomb by agreement or by counter-invention so long as high explosive remained on the lapis.

So first prize of three guineas to Mr. F. T. Giles for the only news-item that offered solid hopes, not of world peace, but of only reasonably destructive wars. Two consolation prizes of one guinea each to Mr. J. A. C. Greenwood for an entry that with serpentine subtlety at least assured him a peaceable existence, and to Mr. A. J. Robinson for rank selfishness. Mr. Kenneth Braine-Hartnell deserves an honourable mention for by far and away the best piece of conversion work.

THE BEDFORD RAY Final tests of Professor Bedford's ray fully support the claims made for it by its inventor. Projected horizontally, it sill arrest the functioning of any mechanically propelled engine up to thirty miles away, and thus a few installations set up upon the frontiers of any country will bring to a complete standstill any attempted invasion by tanks such as overran Western Europe in 1940. Pro- jected vertically, it will tumble into the sea any aeroplane, doodle- bug or rocket coming within its range up to a hundred miles. Against submarines and under-water weapons it is equally deadly.

The value of Professor Bedford's discovery is that, at compara- tively trifling expense, it provides small Powers with an effective means of self-defence against powerful predatory neighbours. Thus It is estimated that Belgium will be able to make her frontier with Germany invulnerable at a cost of about £750,000 annually and with a personnel of no more than 10,000 men. And, of course, the atom bomb now becomes a mere scientific curiosity.

On June 20th, 1837, Her Majesty Queen Victoria ascended the throne, and in five months' time her people will have a long-awaited opportunity to show their loyalty to the great Queen who has ruled this nation and an unparalleled Empire so wisely. The programme for the recognition of this most memorable occasion has not yet been announced, but the Prime Minister, Lord Salisbury, is expected to make a statement during the next few days. It would indeed be highly appropriate that the heart of the Empire's celebrations should be in the city that forms the commercial and financial centre of the civilised world, and which enjoys an unprecedented prosperity at the present time ; a prosperity which is so soundly based that the future can be regarded with confidence.

_Said simply officiating priest, Dmitri Dmitrovitch: The Generalis- simo's attendance was a surprise. His behaviour was beautifully reverent, and he seemed genuinely moved by my sermon on the Prodigal Son (see the Bible, 1,088 pp., $1.10, published by England's Oxford University Press, St. Luke 16). I could see he pulled at his moustaches reflectively. 1 pray that he will come again, for after him I believe God is man's greatest influence for good. (Priest Dmitrovitch has since been sent by Molotov on a Siberian mission.) Stalin's salvation could be Humanity's. Could be.