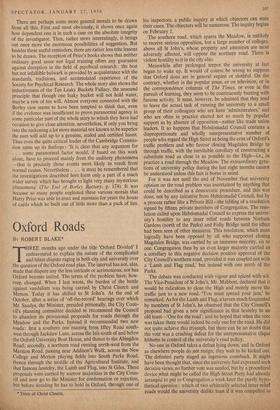 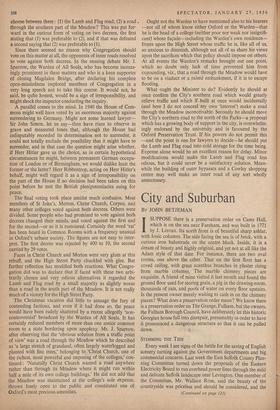 BY ROBERT BLAKE* THREE months ago under the title 'Oxford Divided' 1 endeavoured to explain the nature of the complicated and bitter dispute raging in both city and university over the question of the Oxford road plan. The interval has not, alas, made that dispute any the less intricate or acrimonious, nor has Oxford become united. The terms of the problem have, how- ever, changed. When I last wrote, the burden of the battle against vandalism was being carried by Christ Church and Merton. Today it has shifted to St John's. At the end of October, after a series of 'off-the-record' hearings over which Mr. Sandys, the Minister, presided personally, the City Coun- cil's planning committee decided to recommend the Council to abandon its provisional proposals for roads through the Meadow and the Parks. Instead it recommended two new roads : first a southern one' running from Riley Road south- west through Jackdaw Lane, across the Isis south of and below the Oxford University Boat House, and thence to the Abingdon Road; secondly, a northern road running north-west from the Marston Road, passing near Addison's Walk, across the New College and Merton playing fields into South Parks Road, thence through the middle of the Agricultural Institute, and that famous hostelry, the Lamb and'Flag, into St Giles. These proposals were carried by narrow majorities in the City Coun- cil and now go to the Minister for confirmation or rejection, but before deciding he has to hold in Oxford. through one of * Tutor of Christ Church. his inspectors, a public inquiry at which objectors can state their cases. The objectors will be numerous. The inquiry begins on February 1.

The southern road, which spares the Meadow, is unlikely to receive serious opposition, but a large number of colleges. above all St John's, whose property and amenities are most adversely affected, will oppose the northern road. There is violent hostility to it in the city also.

Meanwhile after prolonged torpor the university at last began to wake up. It would of course be wrong to suppose that Oxford dons are in general supine or slothful. On the contrary, whether in the popular press, or on television, or in the correspondence columns of The Times, or even in the pursuit of learning, they seem to be continuously buzzing with furious activity. It must, however, be admitted that they tend to leave the actual task of running the university to a small group of their colleagues who are keen 'administrators,' and who are often in practice elected not so much by popular support as by absence of opposition—rather like trade union leaders. It so happens that Hebdomadal Council contains a disproportionate and wholly unrepresentative number of people who regard the High Street as being the crux of Oxford's traffic problem and who favour closing Magdalen Bridge to through traffic, with the inevitable corollary of constructing a substitute road as close in as possible to the High—i.e., in practice a road through the Meadow. The extraordinary gyra- tions of university policy during the last eight months cannot be understood unless this fact is borne in mind.

For it was not until the end of November that university opinion on the road problem was ascertained by anything that could be described as a democratic procedure, and this was done, not by any initiative from Hebdomadal Council, but by a process rather like a Private Bill—the tabling of a resolution signed by fifteen private members. of Congregation. The reso- lution called upon Hebdomadal Council to express the univer- sity's hostility to any inner relief roads between Norham Gardens (north of the Parks) and Folly Bridge until the effect had been seen of other measures. This resolution, which must logically have been opposed by all who supported closing Magdalen Bridge, was carried by an immense majority, six to one. Congregation then by an even larger majority carried as a corollary to this negative decision positive approval of the City Council's southern road, provided it was coupled not with a 'Lamb and Flag road,' but instead with one north of the Parks.

The debate was conducted with vigour and spiced with wit. The Vice-President of St John's, Mr. Mabbott, declared that it would be ridiculous to close the High and merely move the traffic jam to a new road. 'You must spread your jam,' he remarked. As for the Lamb and Flag, a'tavern much frequented by members of St John's, he observed that the City Council's proposal had given a new significance in that hostelry to an old toast—'One for the road'; and be hoped that when the vote was taken there would indeed be only one for the road. He did not quite achieve this triumph, but there can be no doubt that the vote was a crushing defeat for the unrepresentative clique hitherto in control of the university's road policy.

No one in Oxford takes a defeat lying down, and in Oxford as elsewhere people do not resign; they wait to be kicked out, The defeated party staged an ingenious comeback. It might have been thought that, since the university, had expressed such decisive views, no further vote was needed, but by a procedural device what might be called the High Street Party had already arranged to put to Congregation a week later the purely hypo- thetical question : which of two arbitrarily selected inner relief roads would. the university dislike least if it was compelled to choose between them : (1) the Lamb and Flag road; (2) a road through the southern part of the Meadow? This was put for- ward in the curious form of voting on two decrees, the first stating that (1) was preferable to (2), and if that was defeated a second saying that (2) was preferable to (1).

Since there seemed no reason why Congregation should vote on this matter at all, the opponents of inner roads resolved to vote against both decrees. In the ensuing debate Mr. J.

Sparrow, the Warden of All Souls, who has become increas- ingly prominent in these matters and who is a keen supporter of closing Magdalen Bridge, after declaring hi8 complete open-mindedness implored members of Congregation in a very long speech not to take this course. It would not, he said, be qufte honest, would be a sign of irresponsibility, and might shock the inspector conducting the inquiry.

A parallel comes to the mind. In 1940 the House of Com- mons might well have voted by an enormous majority against surrendering to Germany. Might not some learned lawyer— Sir John Simon, let us say—then have risen to observe in grave and measured tones that, although the House had indisputably recorded its determination not to surrender, it could not totally exclude the possibility that it might have to surrender, and in that case the question might arise whether, if Herr Hitler gave us the choice, as in certain hypothetical circumstances he might, between permanent German occupa- tion of London or of Birmingham, we would dislike least the former or the latter? Herr Ribbentrop, acting on Herr Hitler's behalf, might well regard it as a sign of irresponsibility on the part of the House if no decision had been taken on this point before he met the British plenipotentiaries suing for peace.

The final voting took place amidst much confusion. Most members of St John's, Merton, Christ Church, Corpus, and many other colleges voted against both decrees. Others were divided. Some people who had promised to vote against both decrees changed their minds, and voted against the first and for the second—or so it is rumoured. Certainly the word 'rat' has been heard in Common Rooms with a frequency unusual in Oxford's urbane society. The figures are not easy to inter- pret. The first decree was rejected by 400 to 10, the second carried by 29 votes.

Faces in Christ Church and Merton were very glum at this rebuff, and the High Street Party chuckled with glee. But further reflection has modified both reactions. What Congre- gation did was to declare that if faced with these two arbi- trarily chosen and very odious alternatives it regarded the Lamb and Flag road by a small majority as slightly worse than a road in the south part of the Meadow. It is not really much of a victory for the High Street Party.

The Christmas vacation did little to assuage the fury of contending factions, and even if it had done so, the peace would have been rudely shattered by a recent allegedly 'non- controversial' broadcast by the Warden of All Souls. It has certainly reduced members of more than one senior common room to a state bordering upon apoplexy. Mr. J. Sparrow, after observing that the 'obvious solution from a traffic point of view' was a road through the Meadow which he described as 'a large stretch of grassland, often largely waterlogged and planted with fine trees,' belonging to 'Christ Church, one of the richest, most powerful and imposing of the colleges,' con- tinued : 'Naturally Christ Church wanted a road anywhere rather than through its Meadow where it might run within half a mile of its own college buildings.' He did not add that the Meadow was maintained at the college's sole expense, thrown freely open to the public and constituted one of Oxford's most precious amenities. . Ought not the Warden to*have mentioned also to his hearers —not all of whom know either Oxford or the Warden—that he is the head of a college (neither poor nor weak nor insignifi- cant, whose façade—including' the Warden's own residence— fronts upon the High Street whose traffic he is, like all of us, so anxious to diminish, although not all of us share his views upon the sacrifices which that policy should impose on others. At all events the Warden's remarks brought out one point, which no doubt only lack of time prevented him from expounding, viz., that a road through the Meadow would have to be on a viaduct or a raised embankment, if it is to escape flooding.

What ought the Minister to do? Evidently he should at once confirm the City's southern road which would greatly relieve traffic and which if built at once would incidentally (and here I do not conceal my own 'interest') make a road through the Meadow inconceivable. Secondly he should move the City's northern road to the north of the Parks—a proposal which has a growing body of support in the city, is overwhelm- ingly endorsed by the university and is favoured by the Oxford Preservation Trust. If his powers do not permit this —and the point is one for lawyers to decide—he should put the Lamb and Flag road into cold storage for the time being. Expense alone would be an excellent reason for delay. Minor modifications would make the Lamb and Flag road less odious, but it could never be a satisfactory solution. Mean- while •the building of outer bypasses and a Cowley shopping centre may well make an inner road of any sort wholly unnecessary.