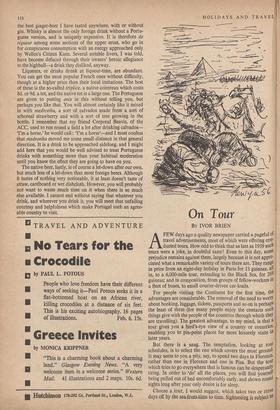 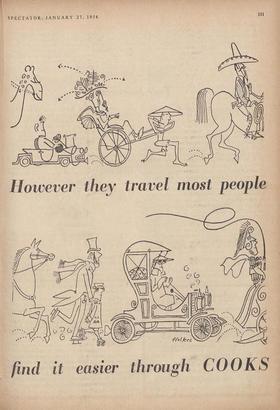 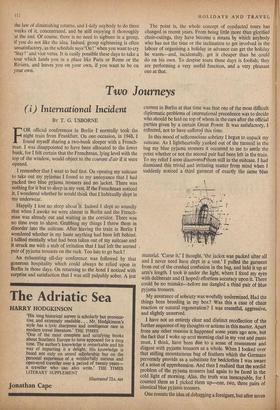 BY IVOR BRIEN FEW days ago a quality newspaper carried a pageful of travel advertisements, most of which were offering con• ducted tours. How odd to think that as late as 1939 such tours were a joke, in doubtful taste! Even to this day, some prejudice remains against them, largely because it is not appre- ciated what a remarkable variety of tours there are. They range in price from an eight-day holiday in Paris for 13 guineas, all in, to a 6,000-mile tour, extending to the Black Sea, for 269 guineas; and in composition, from groups of fellow-workers in a fleet of buses, to small courier-driven car-loads.

For people visiting the Continent for the first time, the advantages are considerable. The removal of the need to worry about booking, luggage, tickets, passports and so on is perhaps the least of them (for many people enjoy the contacts such things give with the people of the countries through which theY are travelling). The greatest advantage, to my mind, is that a tour gives you a bird's-eye view of a country or countries, enabling you to pin-point places for more leisurely visits in later years.

But there is a snag. The temptation, looking at tour schedules, is to select the one which covers the most ground, It may seem to you a pity, say, to spend two days in Florence, rather than one in Florence and one in Pisa. But the tour which tries to go everywhere that is famous can be desperately tiring. In order to 'do' all the places, you will find yourself being pulled out of bed uncomfortably early, and shown round sights long after your only desire is for sleep.

Choose a tour, I would suggest, which takes two or three days off by the sealronvtime to time. Sightseeing is subject to the law of diminishing returns, and I defy anybody to do three weeks of it, concentrated, and be still enjoying it thoroughly at the end. Of course, there is no need to sightsee in a group, if you do not like the idea. Indeed, group sightseeing is often unsatisfactory, as the schedule says 'On !' when you want to cry 'Stay ! ' and vice versa. It is easily possible these days to take a tour which lands you in a place like Paris or Rome or the Riviera, and leaves you on your own, if you want to be on your own. The point is, the whole concept of conducted tours has changed in recent years. From being little more than' glorified choir-outings, they have become a means by which anybody who has not the time or the inclination to get involved in the labour of organising a holiday in advance can get the holiday he wants—and, incidentally, get it cheaper than he could do on his own. To despise tours these days is foolish; they are performing a very useful function, and a very pleasant one at that.