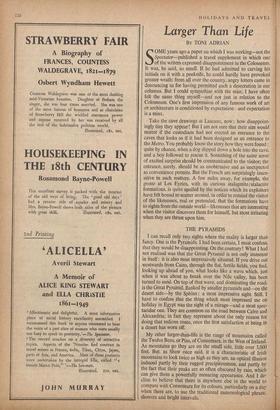 Larger Than Life BY TONI ADRIAN S OME years ago a

paper on which I was working—not the Spectator—published a travel supplement in which one of the writers expressed disappointment in the Colosseum. It was, he said, so small. If he had admitted to carving his initials on it with a, penknife, he could hardly have provoked greater wrath; from all over the country,' angry letters came in denouncing us for having permitted such a desecration in our columns. But I could sympathise with the man; I have often felt the same thing myself—and not just in relation to the Colosseum. One's first impression of any famous work of art or architecture is conditioned by expectation : and expectation is a minx.

Take the cave drawings at Lascaux, now : how disappoint. ingly tiny they appear! But I am not sure that their size would matter if the custodians had not erected an entrance to the caves that looks as if it had been designed as an entrance to the Metro. You probably know the story how they were found : quite by chance, when a dog slipped down a hole into the cave, and a boy followed to rescue it. Something of the same sense of excited surprise should be communicated to the visitor; the entrance, surely, should be as unobtrusive ,and as unexpected as convenience permits. But the French are surprisingly insen- sitive in such matters. A few miles away, for example, the grotte at Les Eyzies, with its curious stalagmite/stalactite formations, is quite spoiled by the notices which its exploiters have felt bound to scatter around, in order to remind the visitor of the likenesses, real or pretended, that the formations have to sights from the outside world—likenesses that are interesting when the visitor discovers them for himself, but most irritating when they are thrust upon him.

THE PYRAMIDS I can recall only two sights where the reality is larger than fancy. One is the Pyramids. I had been certain, I must confess, that they would be disappointing. On the contrary! What I had not realised was that the Great Pyramid is not only immense in itself : it is also most impressively situated. If you drive out westwards from Cairo, through the flat, fertile fields, you find, looking up ahead of you, what looks like a wave which, just when it was about to break over the Nile valley, has been turned to sand. On top of that wave, and dominating the road, is the Great Pyramid, flanked by smaller pyramids and—on the desert side—by the Sphinx : a most impressive sight. Still, I have to confess that the thing which most impressed me on holiday in Egypt was the sight of a mirage—and a most spec- tacular one. They are common on the road between Cairo and Alexandria; in fact they represent about the only reason for doing that tedious route, once the first satisfaction at being in a desert has worn off.

My other larger-than-life is the range of mountains called the Twelve Bens, or Pins, of Connemara, in the West of Ireland. As mountains go they are on the small side, little over 3,000 feet. But, as Shaw once said, it is a characteristic of Irish mountains to look twice as high as they are, an optical illusion induced partly by their rugged precipitousness, and partly by the fact that their peaks are so often obscured by rain, which can give them a powerfully menacing appearance. And I de- cline to believe that there is nywhere else in the world to compare with Connemara for its colours, particularly on a day when there are, to use the traditional meteorological phrase, showers and bright intervals.