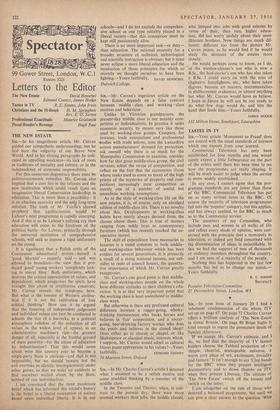 THE NEW ESTATE Sut,—In his magnificent article Mr. Curran guided our sympathetic understanding; but he laid bare the vulgarity of our Brave New World. And in his closing paragraphs he indi- cated its appalling weakness—its lack of roots in traditions of morality and culture, or in the independence of economic responsibility.

For this cancerous degeneracy there must be politico-economic remedies. Mr. Curran, also implied that a cure lies in the reforms and the new inspiration which could result from an imaginative liberal Conservative leadership in education. This is more than a possibility : it is an absolute necessity and the only long-term solution. The truth of Mr. Fairhe's shrewd prophecy that egalitarianism would be Labour's next programme is rapidly emerging. And if this is to be Labour's rallying cry then education will come to the forefront of the political battle—for Labour, primarily through the universal institution of comprehensive schools, will seek to impose a rigid uniformity on the ygung.

It is significant that a Polish critic of the Communist educational system—herself a 'good Marxist' — recently said — and was alloWed to broadcast—the view that it pro- duced 'good' young workers 'completely lack- ing in moral fibre.' Both uniformity, which destroys the critical appreciation of values, and dependence, which pauperises the spirit, have brought this about in totalitarian countries; Mr. Curran reveals the symptoms here. But what is the essence of Western civilisa- tion if it is not the cultivation of free critical thinking? How can it be argued that the fostering of independent judgement and individual values can best be conducted in schools the size of a barracks, in a political atmosphere redolent of the reduction of all values to the widest level of appeal, in an administrative machinery ripe—the greatest danger of all, especially in the fruitful ground of mass passivity—for the abuse of education by indoctrination? That this would come about were this country ever to become a single-party State is obvious—and that is not impossible; but we should beware lest the evil overtake us silently, inconspicuously under other guises, so that we wake up suddenly to find ourselves walled about by the State, robbed of our individualism.

1 am convinced that the most passionate belief which has informed this island's history is the belief in a liberal conception of society based upon individual liberty. It is in our schools—and I do not exclude the comprehen- sive school as one type suitably placed in a liberal variety—that this conception must be kept still passionately alive.

There is no more important task—or duty— than education. The national necessity for a broader structure of technical, technological and scientific instruction is obvious; but it must never eclipse a more liberal, education and the inculcation of those principles for which so recently we thought ourselves to have been fighting.—Yours faithfully, DAVID HENSCHEL Dulwich College