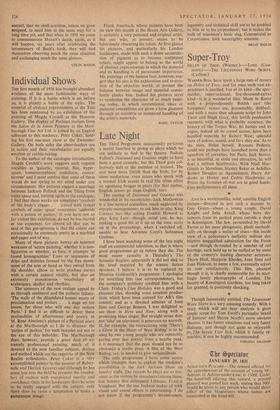 WARNER Bros. have spelit a large sum of money on Helen of Troy, and for once such vast ex- penditure is justified. For of its kind—the spec- tacular. super-colossal, five-thousand-extras kind—it is a wonderful film. Made in Rome with a preponderantly British cast (the foreigners' voices are, presumably, dubbed), and with a more than adequate script by John Twist and Hugh Gray, this lavish production recounts, with what is probably accuracy, the history of the Trojan War. Its battles and its orgies, indeed all its crowd scenes, have been handled superbly by Robert Wise; splendid riots of colour, sound, and fury they are. As to the stars, Helen herself, Rossana Podesta, could not perhaps have launched more than a squadron of corvettes, but Paris, Jack Sernas, is so beautiful, so virile and attractive, he will float a million heartbreaks. With Niall Mac- Ginnis as Menelaus, Stanley Baker as Achilles, Robert Douglas as Agamemnon, Harry An- drews as Hector and Cedric Hardwicke as Priam the fortunes of war are in good hands. Fine performances all these.

Lost is a workmanlike, solid, sensible English picture—directed in just such a manner by Guy Green—about a young couple, David Knight and Julia Armin, whose baby dis- appears from its parked pram outside a shop in Kensington. The law, personified by David Farrar at his most phlegmatic, plods methodi- cally on through a welter of clues—this inside view of a policeman's ineffably tedious day inspires unqualified admiration for the Force —and though de-routed by a number of red herrings, each held up to be sniffed at by some of the country's leading character actresses, Thora Hird, Marjorie Rhodes, Joan Sims and Joan Hickson, to name a few, eventually solves its case satisfactorily. This film, pleasant though it is, is chiefly memorable for its start- lingly lovely photographs of London. The beauty of Kensington Gardens, too long taken for granted, is positively shocking.

* Though lamentably entitled, The Lieutenant Wore Skirts is a very amusing comedy. With a story which will not bear analysis it gives ample scope for Tom Ewell's particular brand of humour and Sheree North's more obvious charms. It has funny situations and very funny dialogue, and though not quite so enjoyable as The Seven Year Itch, which it faintly re- sembles, it can be highly recommended.