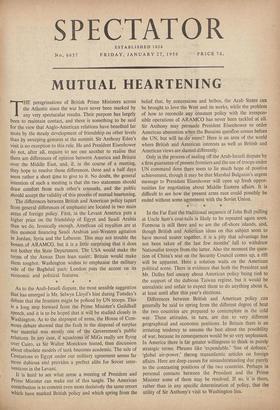 THE peregrinations of British Prime Ministers across the Atlantic since the war have never been marked by any very spectacular results. Their purpose has largely. been to maintain contact, and there is something to be said for the view that Anglo-American relations have benefited far more by the steady development of friendship on other levels than by sweeping gestures at the summit. Sir Anthony Eden's visit is no exception to this rule. He and President Eisenhower do not, after all, require to see one another to realise that there are differences of opinion between America and Britain over the Middle East, and, if, in the course of a meeting. they hope to resolve those differences, three and a half days seem rather a short time to give to it. No doubt, the general intention of such a meeting is that the two statesmen should draw comfort from each other's counsels, and the public should accept the validity of this process of mutual heartening.

The differences between British and American policy (apart from general differences of emphasis) are located in two main areas of foreign policy. First, in the Levant America puts a higher price on the friendship of Egypt and Saudi Arabia than we do. Ironically enough, American oil royalties are at this moment financing Saudi Arabian anti-Western agitation in Jordan, Syria and the Lebanon. This may not trouble the bosses of ARAMCO, but it is a little surprising that it does not bother the. State Department. The USA would make the terms of the Aswan Dam loan easier; Britain would make them tougher. Washington wishes to emphasise the military side of the Baghdad pact; London puts the accent on its economic and political features.

* * * As to the Arab-Israeli dispute, the most sensible suggestion that has emerged is Mr. Selwyn Lloyd's hint during Tuesday's debate that the frontiers might be policed by UN troops. This is a long step forward from the Prime Minister's Guildhall speech, and it is to be hoped that it will be studied closely in Washington. As to the shipment of arms, the House of Com- mons debate showed that the fault in the disposal of surplus war material was mostly one of the Government's public relations. In .any case, if squadrons of MiGs really are flying over Cairo, as Sir Walter Monckton hinted, then discussion about obsolete models of tank becomes academic. The sale of Centurions to Egypt under our military agreement seems far more dubious and provides a perfect alibi for Soviet inter- ventions in the Levant.

It is hard to see what sense a meeting of President and Prime Minister can make out of this tangle. The American contribution is to commit even more decisively the same errors which have marked British policy and which spring from the belief that, by concessions and bribes, the Arab States can be brought to love the West and its works, while the problem of how to reconcile any constant policy with the irrespon- sible operations of ARAMCO has never been tackled at all. Sir Anthony may persuade President Eisenhower to order American abstention when the Buraimi question comes before the UN, but will he do more? Here is an area of the world where British and American interests as well as British and American views are slanted differently.

Only in the process of sealing off the Arab-Israeli dispute by a firm guarantee of present frontiers and the use of troops under UN command does there seem to lie much hope of positive achievement, though it may be that Marshal Bulgan in's urgent message to President Eisenhower will open up fresh oppor- tunities for negotiation about Middle Eastern affairs. It is difficult to see how the present arms race could possibly be ended without some agreement with the Soviet Union.

In the Far East the traditional sequence of John Bull pulling at Uncle Sam's coat-tails is likely to be repeated again soon. Formosa is still there and so are the off-shore islands, and, though British and American ideas on this subject seem to have moved nearer together, it is a pity that advantage has not been taken of the last few months' lull to withdraw Nationalist troops from,the latter. Also the moment the ques- tion of China's seat on the Security Council comes up, a rift will be apparent. Here a solution waits on the American political scene. There is evidence that both the President and Mr. Dulles feel uneasy about American policy being tied to the support of the dubious Taiwan regime, but it would be unrealistic and unfair to expect them to do anything about it, at least until after this year's elections.

Differences between British and American policy can generally be said to spring from the different degree of heat the two countries are prepared to contemplate in the cold war. These attitudes, in turn, are due to very different geographical and economic positions. In Britain there is an irritating tendency to assume the best about the possibility of war, because its consequences would be so very unpleasant. In America there is far greater willingness to think in purely strategic terms. Phrases like `expendable,' line of defence,' `global air-power,' throng transatlantic articles on foreign affairs. Here are deep causes for misunderstanding due purely to the contrasting positions of the two countries. Perhaps in personal contacts between the President and the Prime Minister some of them may be resolved. If so, it is there, rather than in any specific determination of policy, that the utility of Sir Anthony's visit to Washington lies.