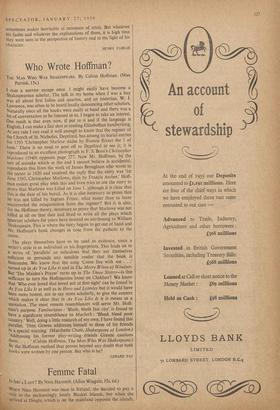 TI1E MAN WHO WAS SHAKESPEARE. By Calvin Hoffman. (Max Parrish, 15s.) I HAD a narrow escape once. I might easily have become a Shakespearean scholar. The talk in my home when I was a boy was all about first folios and quartos, and an historian, W. J. Lawrence, was often to be heard loudly denouncing other scholars. Naturally since all the books were easily at hand and there was a lot of conversation to be listened in to, 1 began to take an interest. One result is that even now, if put to it and if the language is English, I can make a fair shot at reading Elizabethan handwriting. At any rate I can read it well enough to know that the register of the Church of St. Nicholas, Deptford, has among its burial entries for 1593 'Christopher Marlow slaine by ffrancis ffrezcr the 1 of June.' There is no need to post off to Deptford to see it; it is reproduced in an excellent photograph in F. S. Boas's Christopher Marlowe (1940) opposite page 277. Now Mr. Hoffman, by the sort of mistake which in the end 1 cannot believe is accidental, reproduces this from the work of James Broughton who wrote to the rector in 1820 and received the reply that the entry was '1st June 1593, Christopher Marlowe, slain by Francis Archer.' Hoff- man makes great play with this and even tries to use the entry to prove that Marlowe was killed on June 1, although it is clear that this is the date of his burial. As it is also necessary to prove that he was not killed by Ingrain Frizer, what easier than to leave uncorrected the misquotation from the register? But it is also, for the Hoffman theory, necessary to prove that Marlowe was not killed at all on that date and lived to write all the plays which ignorant scholars for years have insisted on attributing to William Shakespeare. This is where the story begins to get out of hand and Mr. Hoffman's book changes in note from the pathetic to the comic.

The plays themselves have to be used as evidence, since a writer's style is as individual as his fingerprints. This leads on to a series of 'parallels' so ridiculous that they are themselves sufficient to persuade any sensible reader that the book is buncombe. We know that the song 'Come live with me . . turned up in As You Like It and in The Merry Wives of Windsor. But 'The Maiden's Prayer' turns up in The Three Sisters—is this sufficient to turn the Hoffmanites loose on Chelthov? We know that 'Who ever loved that loved not at first sight' can be found 'in AS You Like It as well as in Hero and Leander but it would have been more honest, not to say more scholarly, to give the context which makes it clear that in As You Like It it is meant as a quotation. The most remote resemblances will serve Mr. Hoff- man's purpose. Tamhurlaine : 'Blush, blush fair city' is found to have a significant resemblance to Macbeth : 'Bleed, bleed poor country.' Well, doing a little research of my own, I have found this Parallel. 'Then Greene addresse, himself to three of ht friends in a special warning.' (Marchette Chute, Shakespeare of London.) 'Addressing his former play-writing friends Greene cautions Them. . . . ' (Calvin Hoffman, The Man Who Was Shakespeare.) 1151 the Hoffman method that proves beyond any doubt that both hooks were written by one person. But who is he?