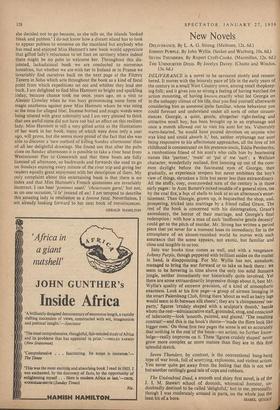 DELI VERANCE. By L. A. G. Strong. (Methuen, 12s. 6d.) DELIVERANCE is a novel to be savoured slowly and remem- bered. It moves with the leisurely pace of life in the early years of the century in a small West Country town, among small shopkeep- ing folk; and it gives you so strong a feeling of having watched the action mounting, of having known exactly what led Georgie on to the unhappy climax of his life, that you find yourself afterwards considering him as someone quite familiar, whose behaviour you could forecast and understand under all sorts of other circum- stances. Georgie, a quiet, gentle, altogether right-feeling and attractive small boy, has been brought up in an orphanage and once a month allowed out to visit his aunt for tea. Vulnerably warm-hearted, 'he would have poured devotion on anyone who was kind and could absorb it,' but, neither orphanage nor aunt being responsive to his affectionate approaches, all the love of his childhood is concentrated on his pretence-uncle, Eddie Pemberthy, a rumbustious friend of his aunt's who calls him by heartening names like 'partner,' mate' or 'pal o' me 'eart': a Wellsian character, wonderfully realised, first looming up out of the com- mon daylight before the fascinated eyes of Georgie, then gradually, as experience tempers but never embitters the boy's view of things, shrunken a little but never less than extraordinary. All the stuffy, cosy, overcrowded turn of the century is in those early pages : in Aunt Butters's mixed muddle of a general store, tea by the coal fire, a box of shells to look at as an afternoon's enter- tainment. Then Georgie, grown up, is bequeathed the shop, and, prospering, tricked into marriage by a friend called Grace. The rest of the book is concerned with his disintegration, Grace's ascendancy, the horror of their marriage, and Georgie's final redemption: with how a man of such 'inoffensive gentle decency' could get to the pitch of murder. Mr. Strong has written a period piece that yet never for a moment loses its immediacy; for in the atmosphere of an almost-vanished world he moves with such assurance that the scene appears, not exotic, but familiar and close and tangible to us too.

Into war books time comes as well, and with a vengeance. Johnny Purple, though peppered with brilliant asides on the matter in hand, is disappointing. For Mr. Wyllie has not, somehow, managed to bring the war forward or to take us back there: we seem to be hovering in time above the only too solid Sumatra jungle, neither immediately nor historically quite involved. Yet there are some extraordinarily impressive things about it, best Mr. Wyllie's quality of extreme precision, of a kind of atmospheric exactness. Look at his first page—a group of airmen lounging in the smart Palembang Club, fitting there 'about as well as hairy legs would seem to fit between silk sheets'; they are 'a chimpanzees' tea- party,' figures 'crudely shaped with a sculptor's thumb,' beside whom the rest—administrative staff, grounded, snug, and conscious of inferiority—look 'smooth, painted, and glazed.' The resulting

contrast'—and this is the book's theme—'made the fliers look like bigger men.' On these first two pages the scene is set so accurately that nothing in the rest of the book—no action, no further know- ledge—really improves on it. These 'figures crudely shaped' never grow more complex or more mature than they are in this first splendid sketch.

Seven Thunders, by contrast, is the conventional bang-bang type of war book, full of scurrying, explosions, and violent action. You never quite get away from the feeling that this is not war but another rattlingly good tale of cops and robbers.

The Undoubted Deed, a smooth and shiny first novel, is of the J. I. M. Stewart school of donnish, whimsical humour, un- doubtedly destined to be called 'delightful,' but to me, personally, though I was moderately amused in parts, on the whole just the