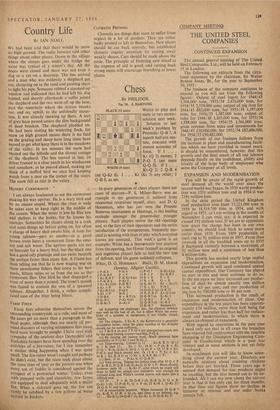 By IAN NIALL WE had been told that there would be snow on high ground. The radio forecast said other things about other places. Down in the village where the stream goes under the bridge the scene was typical of a winter's day. All the doors were closed and there was not even a dog or a cat on a doorstep. The bus arrived and a man who was evidently a shepherd got out, clattering on to the road and pausing there to light his pipe. Someone rubbed a steamed-up window and indicated that he had left his dog behind, and shortly afterwards a collie joined the shepherd and the two went off up the lane, Past the waterhole where the stream breaks out, and on, uphill, to the unfriendly moun- tain. It was already snowing up there. A sort of grey haze passed across the dim background of dead bracken. The shepherd plodded on. He had been visiting his wintering flock, for snow on high ground means there is no feed on the grazing and sheep have long since been moved to get what keep there is in the meadows of the valley. In ten minutes the snow had blotted out the hillside and the distant cottage of the shepherd. The bus moved at last, its driver framed in a clear patch in his windscreen and somehow, as he peered ahead, making me think of a stuffed bird we once had keeping watch from a case on the corner of the stairs. The snow fell as rain in the valley..