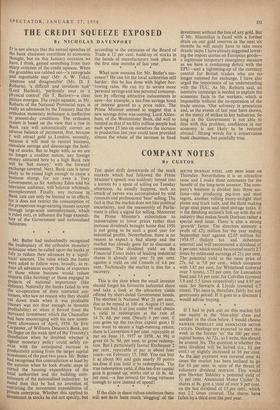 IT is not always that the annual speeches of the bank chairmen contribute to economic thought, but on this January occasion we have, I think, gained something from their sharp criticism of the credit squeeze. When the grumbles are rubbed out—`a retrograde and regrettable step' (Mr. A. W. Tuke), `onerous and disagreeable' (Mr. D. J. Robarts), 'a difficult and invidious task' (Lord Harlech), 'perilously near to a Physical control' (Sir T. Barlow)—a clear picture emerges. The credit squeeze, as Mr. Robarts of the National Provincial says, is really an admission by the Treasury that the orthodox monetary technique is ineffective In present-day conditions. The orthodox system is based on the view that a rise in Bank rate will automatically correct an adverse balance of payments, first, because it will attract gold to London, secondly, because it will tend to restrict business, stimulate savings and discourage the hold- ing of stocks. But to begin with, as we are no longer a creditor nation, any foreign money attracted here by a high Bank rate will be 'hot money,' with the forward exchange covered. Next, Bank rate is never likely to be raised high enough to cause a business slump, for not even a Tory Government, as Sir Anthony Eden told his television audience, will 'tolerate wholesale unemployment. Finally, any increase in, Bank rate can only be limited in its effects, for it does not restrict the consumption of the prosperous wage-earning masses (except through large-scale unemployment, which Is ruled out), or influence the huge expendi- ture of the Government and nationalised Industries.

Mr. Butler had undoubtedly recognised' the inadequacy of the orthodox monetary technique when he called upon the banks in July to reduce their advances by a 'signif- icant' amount. The rules which the banks were asked to follow were, broadly, to re- duce all advances except those of exporters or those whose business would reduce Imports (like farming) or those engaged in Projects of national importance (like defence). Naturally the banks failed to win the co-operation of their restricted cus- tomers, who Saw no reason why they should cut down trade when it was profitable (money was not dear enough to threaten profitability) or when it flowed from the Increased investment which the Chancellor had been encouraging with his new invest- ment allowances of April, 1954. Sir Eric Carpenter, of William's Deacon's Bank, put his finger on the weak spot of the Treasury's disinflation when he doubted whether a tighter monetary policy could safely co- exist with the anticipated increase in productivity arising from the larger capital investment of the past two years. Mr. Butler had recognised this contradiction at least by the autumn when he took drastic steps to curtail the housing expenditure of the local authorities and the building com- mitments of the nationalised industries : he stated then that he had no intention of restricting the investment expenditures of private enterprise. Whether this applied to Investment in stocks he did not specify, but according to the estimates of the Board of Trade a 12 per cent. build-up of stocks in the hands of manufacturers took place in the first nine months of last year.

What now remains for Mr. Butler's suc- cessor? He can hit the local authorities still harder : this he has done with higher bor- ' rowing rates. He can try to secure more personal savings and less personal consump- tion by offering attractive inducements to save—for example, a tax-free savings bond or interest geared to a price index. The Prime Minister seemed to suggest that a new savings drive was coming. Lord Alden- ham, of the Westminster Bank, did well to remind us that if we fifty million people had each spent £5 less on ourselves the increase in production last year could have provided almost the whole of the increase in fixed

investment without the loss of any gold. But if Mr. Macmillan is faced with a further drain on our gold reserves in the next six months he will surely have to take more drastic steps. I have already suggested lower- ing the import quotas on European goods— a legitimate temporary emergency measure as we have a continuing deficit with the EPU—and a tightening-up of the currency control for British traders who are no longer rationed for exchange. I have also urged the importance of an understanding with the TUC. As Mr. Robarts said, an intensive campaign is needed to explain the economic facts to the workers, which is impossible without the co-operation of the trade unions. 'Our solvency is precarious and, as the events of last year have shown, at the mercy of strikes in key industries. So long as the Government is not able to deal with this problem, confidence in our economy is not likely to be restored abroad.' Strong words for a conservative bank chairman, but painfully true.