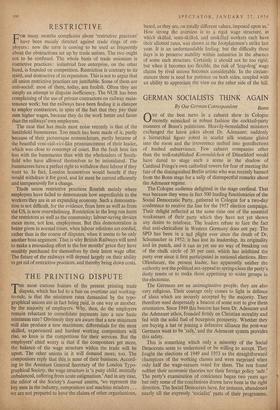 The case that has made most noise recently is that of the Smithfield bummarees. Too much has been made of it, partly because of their picturesque nomenclature, partly because of the boastful veni-vidi-vici-like pronouncement of their leader, which was close to contempt of court. But the fault here lies less with the bummarees than with the wholesalers of Smith- field who have allowed themselves to be intimidated. The bummarees have a perfect right to withdraw their labour if they want to. In fact, London housewives would benefit if they would withdraw it for good, and let meat be carried efficiently and inexpensively for a change. Trade union restrictive practices flourish mainly where employers have failed to demonstrate how unprofitable to the workers they are in an expanding economy. Such a demonstra- tion is not difficult, for the evidence, from here as well as from the US, is now overwhelming. Restriction in the long run hurts the restrictors as well as the community; labour-saving devices mean more, not less, employment. But this demonstration is better given in normal times, when labour relations are cordial, rather than in the course of disputes, when it seems to be only another boss argument. That is why British Railways will need to make a resounding effort in the few months' grace they have sensibly purchased for themselves by their latest wage offer. The future of the railways will depend largely on their ability to get rid of restrictive practices, and thereby bring down costs.