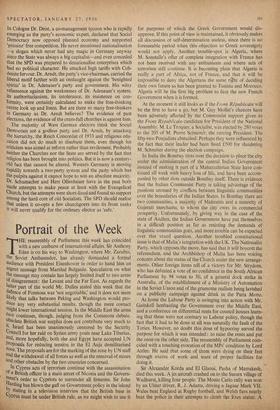 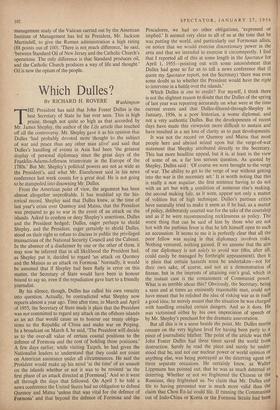 Page 5, 27 January 1956 — Portrait of the Week Pr HE reassembly of Parliament this week
Close

Portrait of the Week Pr HE reassembly of Parliament this week

has coincided with a new outburst of international affairs. Sir Anthony Eden is on his way to Washington, where Mr. Zarubin, the Soviet Ambassador, has already demanded a formal audience with President Eisenhower in order to hand him an urgent message from Marshal Bulganin. Speculation on what the message may contain has largely limited itself to two areas of disagreement : the Levant and the Far East. As regards the latter part of the world Mr. Dulles stated this week that the defence of Formosa was 'not negotiable,' and it does not seem likely that talks between Peking and Washington would pro- th!ee any very substantial results, though the mere contact Might lower international tension. In the Middle East the arms race continues, though, judging from the Commons debate. obsolete British war surplus does not contribute very much to It. Israel has been unanimously censured by the Security Council for her raid on Syrian army posts near Lake Tiberias, and, more hopefully, both she and Egypt have accepted UN Proposals for reducing tension in the El Auja demilitarised Zone. The proposals are for the marking of the zone by UN staff and the withdrawal of all forces as well as the removal of mines And other obstacles by the two countries concerned. in Cyprus acts of terrorism continue with the assassination Of a British officer in a main street of Nicosia and the Govern- ment's order to Cypriots to surrender all firearms. Sir John Harding Government arding has blown the gaff on Govement policy in the island bi Y stating in a television interview that the British base in CYPrus must be under British rule, as we might wish to use it for purposes of which the Greek Government would dis- approve. If this point of view is maintained, it obviously makes all discussion of self-determination useless, since there is no foreseeable period when this objection to Greek sovereignty would not apply. Another trouble-spot is Algeria, where M. Soustelle's offer of complete integration with France has not been received with any enthusiasm and where acts of terrorism still continue. It is becoming plain that Algeria is really .a part of Africa, not of France, and that it will be impossible to deny the Algerians the same riht of deciding their own future as has been granted to Tunisia and Morocco. Algeria will be the first big problem to face the new French Government when it is formed.

At the moment it still looks as if the From Republicain will be the first to have a go, but M. Guy Mollet's chances have been adversely affected" by the Communist support given to the Front Republicain candidate for President of the National Assembly. M. Le Troquer, a Socialist, was elected by 280 votes to the 205 of M. Pierre SchneitCr, the retiring President. The fifty-two Poujadists abstained. Perhaps they were influenced by the fact that their leader had been fined £500 for slandering M. Schneiter during the election campaign.

In India the Bombay riots over the decision to place the city under the administration of the central Indian Government instead of making it part of a Maharashtrian State have con- tinued all week with heavy loss of life, and have been accom- panied by other riots outside Bombay itself. There is evidence that the Indian Communist Party is taking advantage of the passions aroused by conflicts between linguistic communities over the boundaries of the Indian States. In Bombay there are two communities, a majority of Mahrattis and a minority of Gujerati merchants, to whom the city owes its commercial prosperity. Unfortunately, by giving way in the case of the state of Andhra. the Indian Government have put themselves in a difficult position as far as resisting the demands of linguistic communities goes, and more trouble can be expected over this vexed question. Another troubled constitutional issue is that of Malta's integration with the UK. The Nationalist Party, which opposes the move, has said that it will boycott the referendum, and the Archbishop of Malta has been voicing concern about the status of the Church under the new arrange- ments. Other foreign items tell of a victory for Mr. Strydom, who has defeated a vote of no confidence in the South African Parliament by 94 votes to 50, of a general dock strike in Australia. of the establishment of a Ministry of Automation in the Soviet Union and of the gruesome realism being lavished on a publicity campaign against drink in the Paris Metro.

At home the Labour Party is swinging into action with Mr. Gaitskell lambasting the Government over the Middle East, and a conference on differential rents for council houses learn- ing that these were not contrary to Labour policy, though the fact that it had to be done at all was naturally the fault of the Tories. However, no doubt this dose of hypocrisy served the purpose for which it was intended : to raise the rents and put the onus on the other side. The reassembly of Parliament coin- cided with a touching evocation of the MPs' condition by Lord Attlee. He said that some of them were dying on their feet through excess of work and want of proper facilities for doing it.

Sir Alexander Korda and El Glaoui, Pasha of Marrakesh. died this week. A jet aircraft crashed on to the Sussex village of Wadhurst, killing four people. The Monte Carlo rally was won by an Ulster driver. R. J. Adams, driving a Jaguar Mark VII. Wales beat England at Rugby football, and Welsh fans nearly beat the police in their attempts to climb the Eros statue. A

management study of the Vatican carried out by the American Institute of Management has led its President, Mr. Jackson Martindell, to give the Roman administration a high rating (88 points out of 100). 'There is not much difference,' he said, 'between Standard Oil of New Jersey and the Catholic Church's operations. The only difference is that Standard produces oil, and the Catholic Church produces a way of life and thought.' Oil is now the opium of the people.