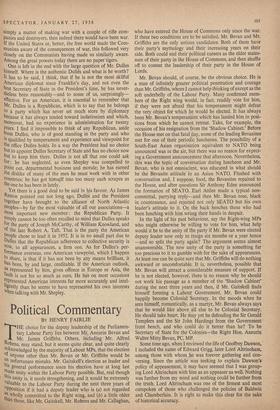 BY HENRY FAIRLIE THE choice for the deputy leadership of the Parliamen- tary Labour Party lies between Mr. Aneurin Bevan and Mr. James Griffiths. Others, including Mr. Alfred kobens, may stand, but it seems quite clear, and quite clearly acknowledged by the majority of Labour MPs, that the election of anyone other than Mr. Bevan or Mr. Griffiths would be at li unfortunate mistake. Mr. Gaitskell's election as leader and lis general performance since his election have at long last Made unity within the Labour Party possible. But, real though this unity is, it needs strengthening, and it would be extremely valuable to the Labour Party during the next three years of °Pposition if it had a deputy leader who is (a) not regarded as Wholly committed to the Right wing, and (b) a little older than those, like Mr. Gaitskell, Mr. Robens and Mr. Callaghan, who have entered the House of Commons only since the war. If these two conditions are to be satisfied, Mr. Bevan and Mr. Griffiths are the only serious candidates. Both of them have their party's mythology and their increasing years on their side. Both could end their political careers as the elder states- men of their party in the House of Commons, and then shuffle off to contest the leadership of their party in the House of Lords.

Mr. Bevan should, of course, be the obvious choice. He is a man of infinitely greater political penetration and courage than Mr. Griffiths, whom I cannot help thinking of except as the soft underbelly of the Labour Party. Many confirmed mem- bers of the Right wing would, in fact, readily vote for him, if they were not afraid that his temperament might defeat the very object for which he would be elected. It has always been Mr. Bevan's temperament which has landed him in posi- tions from which he cannot retreat. Take, for example, the occasion of his resignation from the 'Shadow Cabinet.' Before the House met on that fatal day, some of the leading Bevanites met for one of their periodic luncheons. The possibility of a South-East Asian organisation equivalent to NATO being announced was in the air, but there was no reason for expect- ing a Government announcement that afternoon. Nevertheless, this was the topic of conversation during luncheon and Mr. Bevan, who is not omniscient, was educated in what should be the Bevanite attitude to an Asian NATO. Flushed with conversation and, I suppose, food, the Bevanites repaired to the House, and after questions Sir Anthony Eden announced the formation of SEATO. Earl Attlee made a typical non- committal, parrying reply—and then Mr. Bevan rose, black in countenance, and rejected not only SEATO but his own leader's attitude to it. On the back benches those who had been lunching with him wrung their hands in despair.

In the light of his past behaviour, say the Right-wing MPs who might otherwise be willing to vote for him, what help would it be to the unity of the party if Mr. Bevan were elected deputy leader now only to resign six months or a year hence —and so split the party again? The argument seems almost unanswerable. The new unity of the party is something far too precious to it to gamble with for the sake of appearances. At least one can be quite sure that Mr. Griffiths will do nothing awkward or uncomfortable. It is, nevertheless, possible that Mr. Bevan will attract a considerable measure of support. If he is not elected, however, there is no reason why he should not work his passage as a member of the 'Shadow Cabinet' during the next three years and then, if Mr. Gaitskell finds himself forming a Labour Government, Mr. Bevan could happily become Colonial Secretary. In the moods when he sees himself, romantically, as a martyr, Mr. Bevan always says that he would like above all else to be Colonial Secretary. He should take heart. He may yet be defending the Sir Gerald Templers and the Sir John Hardings from the Government front bench, and who could do it better than he? To be Secretary of State for the Colonies—the Right Hon. Aneurin Walter Mitty Bevan, PC, MP.

Some time ago, when I reviewed the life of Geoffrey Dawson, I included the name of Edward Grigg, later Lord Altrincham, among those with whom he was forever gathering and con- versing. Since the article was seeking to explain Dawson's policy of appeasement, it may have seemed that I was group- ing Lord Altrincham with him as an appeaser as well. Nothing was further from my mind and nothing could be further from the truth. Lord Altrincham was one of the firmest and most outspoken of thoge who challenged the policies of Baldwin and Chamberlain. It is right to make this clear for the sake of historical accuracy.