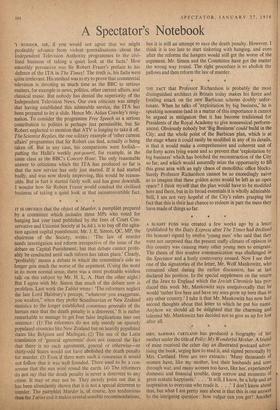 Page 8, 27 January 1956 — THE FACT that Professor Richardson is probably the most distinguished
Close

THE FACT that Professor Richardson is probably the most distinguished

architect jn Britain today makes his fierce and footling attack on the new Barbican scheme doubly unfor- tunate. When he talks of 'exploitation by big business,' he is speaking nonsense (and in a matter of this importance it cannot be argued in mitigation that it has become traditional for Presidents of the Royal Academy to give nonsensical perform- ances). Obviously nobody but 'Big Business' could build in the City; and the whole point of the Barbican plan, which is at the stage where it could easily be modified in any of its details, is that it would make a comprehensive and coherent unit of the forty acres lying waste and so prevent that 'exploitation by big business' which has botched the reconstruction of the City so far, and which would assuredly seize the opportunity to fill this great area with an ugly chaos of monolithic office blocks. Surely Professor Richardson cannot be so exceedingly naive as to imagine that these golden acres would be left as an open space? I think myself that the plan would have to be modified here and there, but in its broad essentials it is wholly admirable. Still. I am not very hopeful of the City's rulers grasping the fact that this is their last chance to redeem in part the.mess they have made of things so far.