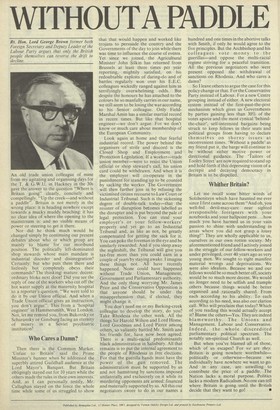 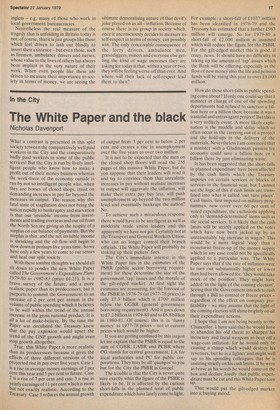 Rt. Hon. Lord George Brown former both Foreign Secretary and Deputy Leader of the Labour Party argues that only the British people themselves can reverse the drift to decline.

An old trade union colleague of mine from my agitating and organising days for the T. & G.W.U. in Hackney in the 30s gave the answer to the question "Where is Britain going" clearly, concisely and compellingly. "Up the creek—and without a paddle". Britain is not merely in the wrong place: it is heading nowhere except towards a mucky muddy beaching: it has no clear idea of where the opening to the mainstream is: and no visible means of power or steering to get it there.

Nor did he think much would be changed simply by continuing our present debates about who or which group are mainly to blame for our moribund position. The politically left-dominated shop stewards whose main mandate is industrial disorder and disintegration? Certainly: but who puts them there and listlessly but completely obeys their commands? The thinking: mature: decent: ordinary bloke next door! Did you see the reply of one of the workers who cut off the hot water supply at the maternity hospital to a reporter's question. "We were told to do it by our Union official. And when a Trade Union official gives an instruction, you don't argue". This from a 'hospital engineer' in Hammersmith, West London. Not, let me remind you, from Bukovsky or Scharansky or Ginsburg facing an eternity of misery in a Soviet psychiatric institution!

Who Cares a Damn?

Then there is the Common Market. 'Unfair to Britain' said the Prime Minister's banner when he addressed the superbly attired Guildhall audience at the Lord Mayor's Banquet. But Britain obligingly stayed out for 10 years while the others made the rules in their own interests. And, as I can personally testify, Mr. Callaghan stayed on the fence the whole time while some of us struggled to show that that would happen and worked like trojans to persuade the country and the Governments of the day to join while there was time to influence the course of events. Yet since we joined, the Agricultural Minister John Silkin has returned from Brussels at least three times per year reporting, mightily satisfied, on his redoubtable exploits of daring-do and of battles regularly won over his E.E.C. colleagues wickedly ranged against him in terrifyingly overwhelming odds. But despite the honours he has attached to the colours he so manfully carries in our name, we still seem to be losing the war according to his Senior colleague. Only FieldMarshal Amin has a similar martial record in recent times. But like that hospital engineer—we don't argue. For we don't know or much care about membership of the European Community.

Look again at home and that fearful industrial record. The power behind the organisers of strife and discord is the Closed Shop and Employment and Protection Legislation. If a worker—trade union member—were to resist the Union official or shop steward's call, his union card could be withdrawn. And when it is the employer will co-operate in the punishment for standing up to be counted by sacking the worker. The Government will then further join in by refusing the victimised citizen recourse to Law Court or Industrial Tribunal. Such is the sickening degree of double-talk today—that the resister of disruption becomes labelled as the disrupter and is put beyond the pale of legal protection. You can steal your employer's or your fellow-workers' property and yet go to an Industrial Tribunal and, as like as not, be greatly compensated for getting the sack for it. You can poke the foreman in the eye and be similarly rewarded. And if you sleep away the nightshift, the Tribunal will give you tax-free more than you could earn in a couple of years by staying awake. I imagine these things not. All have recently happened. None could have happened without Trade Union, Management, Government and Parliamentary authority. And the only thing worrying Mr. James Prior and the Conservative Opposition is that anyone should be under the misapprehension that, if elected, they might change it.

You don't need me or my Barking-creek colleague to develop the story, do you? Take Rhodesia the other week. All the things Sir Harold Wilson and Lord Home. Lord Goodman and Lord Pierce among others, so valiantly battled Mr. Smith and his friends for, have now been agreed. There is a multi-racial predominantly black administration in Salisbury. All that remains is to put the internal agreement to the people of Rhodesia in free elections. For that the guerilla bands must have the power of the gun removed. The administration must be supported by us and not hamstrung by sanctions imposed unilaterally and exclusively on it while its murdering opponents are armed: financed and materially supported by us. All this our negotiators swore to do in our names a hundred and one times in the abortive talks with Smith, if only he would agree to the five principles. But the Archbishop and his colleagues vote money to the guerillas—and oppose the multi-racial regime striving for a peaceful transition. All the previous negotiators who were present opposed the withdrawal of sanctions on Rhodesia. And who cares a damn?

So I leave others to argue the case for this policy change or that. For the Conservative Party instead of Labour. For a new Centre grouping instead of either. A new electoral system instead of the first-past-the-post mechanism which gives us Governments by parties gaining less than 30% of the votes apiece and the most cynical 'behindthe-chair', self-interested bargains being struck to keep fellows in their seats and political groups from having to declare themselves on thorny issues at inconvenient times. 'Without a paddle' as my friend put it, the barge will continue to be without either motive power or directional guidance. The 'Tailors of Tooley Street' are now required to stand up and hold forth if this depressing vision of a decrepit and decaying democracy in Britain is to be dispelled.

Let me recall some bitter words of Solzhenitsyn which have haunted me ever since I first came across them "And oh, you well-fed devil-may-care near sighted irresponsible foreigners with your notebooks and your ballpoint pens ... how much you have harmed us in your vain passion to shine with understanding in areas where you did not grasp a lousy thing!" They are wholly applicable to us, ourselves in our own rotten society. My aforementioned friend and I actively joined in the struggle of our fellow-workers and under privileged, over 40 years ago as very young men. We sought to right manifest material wrongs and deprivations. We were also idealists. Because we and our fellows would be so much better off, society would be so much more decent. We would no longer need to be selfish and trample others because things would be better organised and rationally shared. From each according to his ability. To each according to his need, was also our clarion call. Who will proclaim that today? Which of you reading this would actually accept it? Blame the others—Yes. They are indeed blameworthy. The Unions and Management. Labour and Conservative. Indeed, the whole discredited parliamentary political spectrum. The notably un-spiritual Church as well.

But when you've blamed all of those, which of us escapes? For we are they. Britain is going nowhere worthwhile— politically or otherwise—because we individually have nowhere we want to go. And in any case, are unwilling to contribute the price of a paddle. The Nation lacks a moral purpose. Politics lacks a modern Radicalism. No one can tell where Britain is going until the British decide that they want to go! • ingless — e.g. many of those who work in local government bureaucracies.

Nevertheless the real measure of the tragedy that is unfolding in Britain today is not, of course, that it is just groups like these which feel driven to lash out blindly to assert their existence — but even those, such as firemen, ambulance drivers and nurses, whose value to the lives of others has always been implicit in the very nature of their work. When even people like these are driven to measure their importance to society in terms of money, we are seeing the ultimate demoralising nature of that devil's joke played on us all — inflation. Because of course there is no group in society which, once it unconsciously decides to measure its self-respect in terms of money, can possibly win. The only conceivable consequence of the lorry drivers, ambulance men, gravediggers, miners and everyone else getting the kind of wage increases they are asking for today is that, within a year or two, they will be feeling worse off than ever. And where will their lack of self-respect lead them to then?