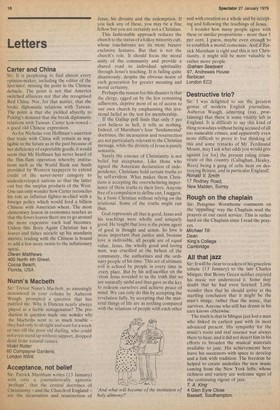 Sir: It is perplexing to find almost every opinion-maker, including the editor of the Spectator, missing the point in the Chinese debacle. The point is not that America switched alliances nor that she recognised Red China. Nor, for that matter, that she broke diplomatic relations with Taiwan. The point is that she yielded abjectly to Peking's demand that she break diplomatic relations with Taiwan. Carter kow-towed — a good old Chinese expression.

As for Nicholas von Hoffman's assertion that trade with China will remain as negligible in the future as in the past because of her deficiency of exportable goods, it would seem that Mr Hoffman has never heard of the flim-flam operation whereby institutions such as the World Bank use funds provided by Western taxpayers to extend credit of the never-never category to underdeveloped nations so that the latter can buy the surplus products of the West. One can only wonder how Carter reconciles his role as inflation fighter-in-chief with a foreign policy which would feed a billion Chinese with American wheat. The most elementary lesson in economics teaches us that the fewer loaves there are to go around the more expensive each loaf becomes. Unless this Born Again Christian has a loaves and fishes miracle up his mandarin sleeves, trading with the Chinese is bound to add a few more twists to the inflationary spiral.

Sir: Trevor Nunn's Macbeth, so amusingly denounced in your colums by Auberon Waugh, prompted a question that has puzzled me. Why is Duncan nearly always played as a feeble nonagenarian? The production in question made one wofider why the Macbeths went to so much trouble — they had only to sit tight and wait for a week or two till the poor old darling, who could not even stand up without support, dropped dead from natural causes.

Sir: Patrick Marnham writes (13 January) with only a journalistically agnostic `perhaps', that the central doctrines of Christianity — and the Church of England — are the incarnation and resurrection of Jesus, his divinity and the redemption. If you lack any of these, you may be a fine fellow but you are certainly not a Christian.

This fashionable approach reduces the church to the status of a folksy minority cult, whose touchstones are its more bizarre exclusive features. But that is not the church's role. It should focus the moral unity of the community and provide a shared road to individual spirituality through Jesus's teaching. It is failing quite disastrously, despite the obvious desire of each generation for greater meaning and moral certainty.

Perhaps the reason for this disaster is that the clergy, egged on by the few remaining adherents, deprive most of us of access to our own church by emphasising this irrational belief as the test for membership.

If the Gallup poll finds that only 5 per cent believe in hell, it tells us nothing. Indeed, of Marnham's four `fundamental' doctrines, the incarnation and resurrection are not particularly relevant to the Christian message, while the divinity of Jesus is purely semantic.

Surely the essence of Christianity is not belief but acceptance. Like those who signed the American declaration of independence, Christians hold certain truths to be self-evident. What makes them Christians is accepting the overwhelming importance of these truths to their lives. Anyone free of a compulsion to define can, I suggest, be a basic Christian without relying on the irrational. Some of the truths might run thus.

God represents all that is good. Jesus and his teachings were wholly and uniquely good. He taught that love is the prime agent of good in thought and action. So love is more important than justice and, because love is indivisible, all people are of equal value. Jesus, the wholly good and loving man, was crucified at the behest of the community, the authorities and the ordinary people of his time. This act of ultimate evil is echoed by people in every time in every place. But by his self-sacrifice on the cross Jesus revealed to us the truth that we are naturally sinful and thus gave us the key to redeem ourselves and achieve peace of mind. We can only do this by accepting the revelation fully, by accepting that the material things of life are as nothing compared with the relations of people with each other and with creation as a whole and by accepting and following the teachings of Jesus.

I wonder how many people agree with these or similar propositions — more than 5 per cent, I guess, maybe even enough to re-establish a moral consensus. And if Patrick Marnham is right and this is not Christianity, it might still be more valuable to rather more people.

Sir: I was delighted to see the greatest genius of modern English journalism, Auberon Waugh, admitting (nay, proclaiming) that there is some vitality left in England. It is difficult to say this kind of thing nowadays without being accused of all too nameable crimes, and apparently even more difficult to prove it: but thinking of this and some remarks of Mr Ferdinand Mount, may I ask what odds you would give against (or for) the present ruling triumvirate of this country (Callaghan, Healey, Rees) being a gang of celts bent on destroying Britain, and in particular England!. Ronald V. Smith 17 Rodney Road, New Malden, Surrey

Rough on the chaplain

Sir: It will be clear to readers of his graceless tribute (13 January) to the late Charles Mingus, that Benny Green neither enjoyed his music nor understood it. Some may doubt that he had even listened. Little wonder then that he should arrive at the startling conclusion that it might be the man's image, rather than the music, that survives. Anyone who still has drums in his ears knows otherwise. .

The truth is that in Mingus jazz lost a man who linked its earliest past with its most advanced present. His sympathy for the music's roots and real essence was always there to hear, and it did not desert him in his efforts to broaden the musical materials available to jazz. His achievements here leave his successors with space to develop and a link with tradition. The freedom he helped to create underlies the new music coming from the New York lofts, whose richness and variety are welcome signs of the continuing vigour of jazz.