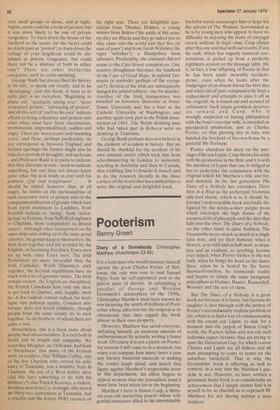 Diary of a Somebody Christopher Matthew (Hutchinson £3.95) It is a bold man who would measure himself against the great Charles Pooter of Holloway, the only man ever to oust Samuel Pepys from his self-appointed post as the patron saint of diarists. In attempting a parallel of George and Weedon Grossmith's masterpiece of the 1890s, Christopher Matthew must have known he was incurring the wrath of millions of Pooterites whose affection for the original is so obsessional that they regard the book almost as their own property.

However, Matthew has saved everyone, including himself, an immense amount of embarrassment by actually writing a funny book. Of course it is not a patch on Pooter, for reasons I will come to in a moment, but when you compute how many times a year any literary humorist succeeds in making the reader laugh aloud, and match that figure against Matthew's respectable score in this department, his effort begins to appear as more than the journalistic stunt it must have been taken for in the beginning.

Matthew's hero is Simon Cusp, a thirtysix-year-old marketing poseur whose congenital innocence allied to his interminable bachelor status encourages him to hope for the advent of The Woman. Surrounded as he is by young men who appear to have no difficulty in enjoying the fruits of conjugal excess without its legal onus, Cusp chases after this one and that with sad results. Even his rash, which has vaguely venereal connotations, is picked up from a perfectly legitimate session on the massage table. He is, in fact, a true offspring of Pooter in that he has been made incurably accidentprone; even when he looks after the budgerigar of an absent friend the bird dies and when out of pure compassion he buys a replacement and attempts to pass it off as the original, he is found out and accused of callousness. Such innate goodness deserves its reward and Cusp, who is wrongly suspected of having philandered with the boss's overripe wife, is awarded an unexpected promotion, just as Charles Pooter, on that glowing day in July, was handed the freehold of his own house by a grateful Mr Perkupp.

Pooter abandons his diary on the marriage of his son Lupin; Cusp throws his aside with his promotion in the firm, and it is with the mention of Lupin that one is obliged at last to undertake the comparison with the original which Mr Matthew's title and format demand. In the last generation The Diary of a Nobody has overtaken Three Men in a Boat as the archetypal Victorian silly-fool classic, which is as it should be. Jerome's indestructible book was badly disfigured by the penny-a-liner purple prose which interrupts the high drama of the unopened tin of pineapple and the shirt that falls into the river. The Diary of a Nobody, on the other hand, is quite faultless. The Grossmiths never struck so much as a single false note, and yet their humour, when it flowers, is as wild and as half-mad, as drunken and as exultant, as anything Jerome ever raised; when Pooter bathes in the red bath, when he bangs his head on the dance floor, when he is bested by the loony Burwin-Fosselton, he transcends reality and begins to inhale the same benignant atmosphere as Holmes, Bunter, Rassendyll, Wooster and the rest of them.

But The Diary of a Nobody is a great work not because it is funny, but because its laughter is shot through with the pathos of Pooter's uncomfortably realistic problem in life, which is to find a way of communicating with his errant son Lupin; to sink for a moment into, the jargon of Simon Cusp's world, the Pooters father and son cut such ludicrous capers because they are trying to span the Generation Gap, for which reason Charles and Lupin are all fathers and all sons attempting to come to terms on the suburban battlefield. That is why the Grossmiths' book is affecting as well as comical, in a way that the Matthew's pastiche is not. However, to have written a genuinely funny book is so considerable an achievement that I simply cannot find it in myself to be so churlish as to reproach NI, Matthew for not having written a masterpiece.