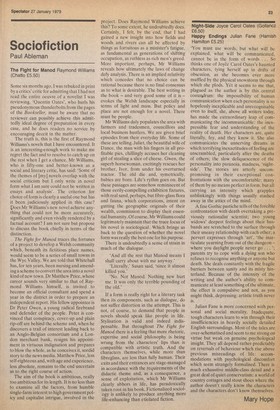 The Fight for Manod Raymond Williams (Chatto £5.50) Some six months ago, I was rebuked in print by a critics' critic for admitting that I had not read the entire oeuvre of a novelist I was reviewing. 'Quentin Oates', who hurls his pseudonymous thunderbolts from the pages of the Bookseller, must be aware that no reviewer can possibly achieve this admittedly ideal degree of preparation in every case, and he does readers no service by encouraging deceit in the matter.

The truth is, this is the first of Raymond Williams's novels that I have encountered. It is an interesting-enough work to make me regret the fact and to resolve to catch up on the rest when I get a chance. Mr Williams, who is fifty-one and better-known as a social and literary critic, has said: 'Some of the themes of [my] novels overlap with the social criticism but I only write in novel form what I am sure could not be written in essays and analysis'. The criterion for choice of form is clearly a useful one but has it been judiciously applied in this case? Poes Mr Williams's new novel achieve anything that could not be more accurately, significantly and even vividly rendered by a factual account? I am not sure but propose to discuss the book chiefly in terms of the distinction.

The Fight for Manod traces the fortunes of a project to develop a Welsh community which, beneath its fictitious place names, would seem to be a series of small towns in the Wye Valley. We are told that Whitehall has, for ten years, been nursing and amending a scheme to convert the area into a novel kind of new town. Dr Matthew Price, whose career sounds very similar to that of Raymond Williams himself, is invited to become an official consultant and spend a year in the district in order to prepare an independent report. His fellow appointee is Dr Peter Owen, a young radical firebrand and defender of the people. Peter is convinced that conspiracy, cover-up and plain rip-off are behind the scheme and, when he discovers a trail of interest leading back to an Anglo-Belgian consortium and a London merchant bank, resigns his appointment in virtuous indignation and prepares to blow the whole, as he conceives it, sordid story to the news media. Matthew Price, less self-righteous and, with age and experience, less absolute, remains to the end uncertain as to the right course of action.

The aim of the book is ambitious, really too ambitious for its length. It is no less than to examine all the factors, from humble single-farm interest to high government policy and capitalist intrigue, involved in the project. Does Raymond Williams achieve this? To some extent, he undoubtedly does. Certainly, I felt, by the end, that I had gained a new insight into how fields and woods and rivers can all be affected by things as fortuitous as a minister's fatigue, as fundamental as generations of shifting occupation, as ruthless as rich men's greed. More important, perhaps, Mr Williams reveals how ultimately the laws of change defy analysis. There is an implied relativity which concedes that no choice can be rational because there is no final consensus as to what is desirable. The best writing in the book — and very good some of it is — evokes the Welsh landscape especially in terms of light and mass. But policy and place are not enough for a novel. There must be people.

Mr Williams duly populates the area with farmers and tradesmen, councillors and local business hustlers. We are given brief episodes from their everyday life. Some of these are telling. Juliet, the beautiful wife of Dance, the man with his fingers in all profitable pies, chillingly accuses her cleaning girl of stealing a slice of cheese. Gwen, the superb horsewoman, excitingly rescues her brother, Ivor, from under his overturned tractor. The old die and, symetrically, babies are born. Life's rythm goes on. But these passages are somehow reminiscent of those eerily-compelling exhibition fixtures, with real sand, perhaps, but fibre-glass flora and fauna, which corporations, intent on gutting the geographic originals of their wealth, commission to display their essential humanity. Of course, Mr Williams could legitimately maintain that the truce focus of his novel is sociological. Which brings us back to the question of whether the novel form was really the best one for his purpose.

There is undoubtedly a sense of strain in much of the dialogue.

'And all the rest that Manod means I shall carry about with me anyway.'

'Literally,' Susan said, 'since it almost killed you.'

'No. Not Manod. Nothing new hurt me. It was only the terrible pounding of the old.'

If a form is really right for a literary task then its components, such as dialogue, do not suffer distortion in the attempt. This is not, of course, to demand that people in novels should speak like people in life. Stylisation is valid and indeed indispensable. But throughout The Fight for Manod there is a feeling that more rhetoric, expertise and social philosophy is being wrung from the characters' lips than is compatible with artistic truth. And the characters themselves, while more than• fibreglass, are less than fully human. Their exits and their entrances are stage-managed in accordance with the requirements of the didactic theme and, as a consequence, a sense of exploitation, which Mr Williams clearly abhors in life, has paradoxically taken root in his book. Fictionalized sociology is unlikely to produce anything more life-enhancing than etiolated fiction. Night-Side Joyce Carol Oates (Gollancz £6.50) Happy Endings Julian Fermi (Hamish Hamilton £5.25) 'You must use words, but what will be explained, what will be communicated, cannot be in the form of words . . . So thinks one of JoyCe Carol Oates's haunted characters, tying herself up in drifts of obsession, as she becomes ever more muffled by the physical snowstorm through which she plods. Yet it seems to me that, plagued as the author is by this central conundrum: the impossibility of human communication when each personality is so hopelessly inexplicable and unrecognisable even to itself, ,she, above all writers today, has made the extraordinary leap of communicating the incommunicable: the inexpressible fear and understanding of the reality of death. Her characters are, quite literally, fey, and they know it. She also communicates the unnerving dreams in which terrifying inexactitudes of feeling are unscrambled, particularly after the deaths of others; the slow deliquescence of the personality into paranoia, madness, 'nightside'. The stories are utterly uncompromising in their exceptional confrontations with the uncomfortable: many of them by no means perfect in form, but all carrying an intensity which grapples unblinkingly with things usually stashed away in the attics of the mind.

A fine Gothic pastiche tells of the forcible confrontation with death overtaking a previously rationalist scientist; two young widows' deepest feelings about their husbands are scratched to the surface through their uneasy relationship with each other; a pervert expresses through 'art', 'the inarticulate yearning from out of the dungeon — where you daylight people never go . . . '; parents try to cope with a dying son who refuses to recognise anything or anyone but death. She deals constantly with the fragile barriers between sanity and its misty hinterland. Because of the intensity of the writing and the author's ability to communicate at least something of the ultimate, the effect is compulsive and not, as you might think, depressing: artistic truth never is.

Julian Fane is more concerned with personal and social morality. Inadequate, tough characters learn to win through their insufficiencies in heavily socially detailed English surroundings. Most of the tales are over-schematised and seem to me strong on virtue but weak on genuine psychological insight. They all depend rather predictably on reversals of behaviour which rise above previous misreadings of life: accommodations with psychological discomfort which seem strangely formalised. There is much exhaustive middle-class detail and a great deal of quiet conservatism: a world of country cottages and stout shoes where the author doesn't really know the characters and the characters don't know themselves.