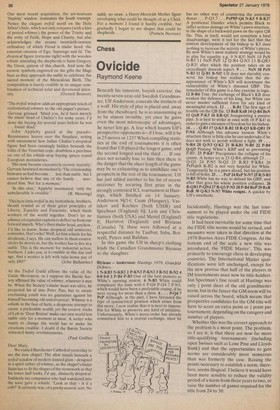 Beneath his innocent, boyish exterior, the twenty-seven-year-old Swedish Grandmaster, Ulf Andersson, conceals the instincts of a wolf. His style of play is placid and, away from the chessboard, he is so unassuming as to be almost invisible, yet once he gains even the most microscopic of advantages, he never lets go. A fear which haunts Ulf s prospective opponents is — if I lose, will it be in 25 moves or 125? When compiling statis tics at the end of tournaments it is often found that Ulf played the longest game, and the second longest and the third . . . If one does not actually lose to him then there is the danger that the sheer length of the game may be so exhausting as to annihilate one's prospects in the rest of the tournament. Ulf has just added another to his list of recent successes by securing first prize in the strongly contested ICL tournament at Hastings, which finished on 14 January: Andersson 94/14; Csom (Hungary), Vasiukov and Kochiev (both USSR) and Spedman (England) 84; Lein and Christiansen (both USA) and Mestel (England) 8; Hartston (England) and Biyiasas (Canada) 74; these were followed at a respectful distance by Taulbut, Suba, Bot terill, Peters and Balshan.

In this game the Ulf in sheep's clothing leads the Canadian Grandmaster Biyiasas to the slaughter.

1 N-KB3 N-KB3 2 P-KN3 P-KN3 3 B-N2 B-N2 4 0-0 0-0 5 P-B4 P-B3 One of the best answers to White's opening system. 6 N-B3 White could complicate the issue with 6 P-04 P-Q4 7 P-N3, which would have been a preferable course, if he were trying for more than a draw. 6. . . P-Q4 7 PxP Although, in the past, I have favoured the type of symmetrical position which arises from this move, I now realise that it is next to impossible for White to preserve any kind of initiative. Unfortunately, White's move-order has already committed him to a central exchange, since he

has no other way of countering the annoying

threat . . P-05.7 PxP8P-Q4 N-K5 9 B-K3? A positional blunder which permits Black to inflict serious damage on White's pawn structure, in the shape of a backward pawn on the open QB file. This, in itself, would not constitute a fatal disadvantage, were it not for the fact that the aimless development of the bishop to K3 does nothing to increase the activity of White's pieces. By now White's most realistic strategy would be to play for equality e.g. 9 N-K5! NxN 10 PxN N-B3 11 NxN PxN 12Q-R4 Q-N3 13 B-QR3 Q-R3! after which the position takes on an exceedingly drawish aspect. 9 . . . NxN 10 PxN N-B3 11 Q-Bl B-N5! Ulf does not slavishly conserve his bishop but realises that the disappearance of White's KN will accentuate the vulnerability of White's diseased QBP. The remainder of this game is a fine exercise in logic. 12 B-R6 True, the exchange of Black's KB does weaken the defences of his king, but White can never muster sufficient force for any kind of meaningful attack. 12 . . . R-B1 The first sign of trouble on the QB file. 13 BxB KxB 14Q-B4 BxN 15 QxB P-1(3 16 KR-Q1 Inaugurating a passive plan. It is best to strike at once with 16 P-K4! in order to gain a measure of freedom for his bishop. 16. . . Q-B3 17 Q-K3 R-B2 18 R-Q3 KR-QB1 19 P-N4 Although this advance loosens White's structure there is little else he can undertake if he does not wish to perish without a fight. 19 . . .

Incidentally, Hastings was the last tournament to be played under the old FIDE title regulations.

It had been inevitable for some time that the FIDE title norms would be revised, and measures were taken in that direction at the 1978 Buenos Aires FIDE Congress. At the bottom end of the scale a new title was introduced, the 'FIDE Master'. This was primarily to encourage chess in developing countries. The International Master qualifications were left unchanged, except for the new proviso that half of the players in IM tournaments must now be title-holders. Jon Speelman's fine result at Hastings was only point short of the old grandmaster norm, but in the future the GM norm will be raised across the board, which means that prospective candidates for the GM title will have to score an extra point or point per tournament, depending on the category and number of players.

Whether this was the correct approach to the problem is a moot point. The problem, as I see it, is that there are now far more title-qualifying tournaments (including open Swisses such as Lone Pine and Lloyds Bank) and that the opportunities to gain norms are considerably more numerous than was formerly the case. Raising the points necessary to establish a norm, therefore, seems illogical. I believe it would have been more sensible to reduce the validity period of a norm from three years to two, or raise the number of games required for the title from 24 to 30.