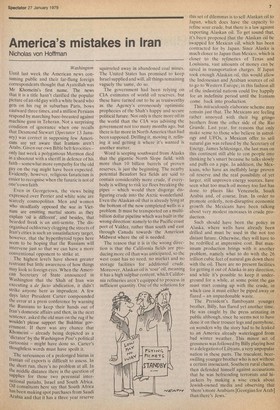 Washington Until last week the American news consuming public and their far-flung foreign correspondents thought that Ayatollah was Mr Khomeini's first name. The news that it is a title hasn't clarified the popular Picture of an old guy with a white beard who gets on his rug in suburban Paris, bows eastward three times, and a million Persians respond by marching bare-breasted against machine guns in Teheran. Not a surprising condition of ignorance when one recalls that Desmond Stewart (Spectator 13 January) was correct in supposing few Americans are yet aware that Iranians aren't Arabs. Given our own Bible belt ferocities — only last week a polygamous Mormon died in a shootout with a sheriff in defence of his faith— somewhat more sympathy for the old guy on the rug might have been expected. Evidently, however, religious fanaticism is easier to recognise when the fanatic is not of one's own faith.

Even in Georgetown, the views being expressed over Perrier and white wine are scarcely cosmopolitan. Men and women who steadfastly opposed the war in Vietnam are emitting martial snorts as they explain 'oil is different', and besides, that bearded freak is an anti-semite. The disorganised ochlocracy clogging the streets of Iran's cities is such an unsatisfactory target, however, that the hyperthyroid types here seem to be hoping that the Russians will intervene just so that we can have a more conventional opponent to strike at.

The highest levels have shown greater restraint but little awareness of how things may look to foreign eyes. When the American Secretary of State announced in Washington that the Shah of Iran was executing a de facto abdication, it didn't strike anyone here as imprudent. A few days later President Carter compounded the error at a press conference by warning the Russians to keep their hands out of Iran's domestic affairs and then, in the next sentence, asked the old man on the rug if he wouldn't please support the Bakhtiar government. If there was any chance that Khomeini — already being depicted as a 'dictator' by the Washington Post's political cartoonist — might have done so. Carter's thoughtless words must have spoilt it.

The seriousness of a prolonged hiatus in Iranian oil exports is difficult to assess. In the short run, there's no problem at all. In the middle distance there is the question of supplies for those two perennial international pariahs, Israel and South Africa. Oil consultants here say that South Africa has been making spot purchases from Saudi Arabia and that it has a three year reserve squirreled away in abandoned coal mines. The United States has promised to keep Israel supplied and will, all things remaining vaguely the same, do so.

The government had been relying on CIA estimates of world oil reserves, but these have turned out to be as trustworthy as the Agency's erroneously optimistic prophecies of the Shah's happy and secure political future. Not only is there more oil in the world than the CIA was advising the government not too many months ago, but there is far more in North America than had been supposed. Drilling it, moving it, refining it and getting it where it's wanted is another matter.

Word is seeping southward from Alaska that the gigantic North Slope field, with more than 10 billion barrels of proven reserves, is just the beginning. The nearby potential Beaufort Sea fields are said to contain considerably more crude, if everybody is willing to risk ice floes breaking the pipes — which would then disgorge disfiguring crude into the Arctic wonderland. Even the Alaskan oil that is already lying at the bottom of the now completed wells is a problem. It must be transported on a multibillion dollar pipeline which was built in the wrong direction: namely to the Pacific coast port of Valdez, rather than south and east through Canada towards the American Midwest where the oil is needed.

The reason that it is in the wrong direction is that the California fields are producing more oil than was anticipated, so the west coast has no need, no market and no storage facilities for additional crude. Moreover, Alaskan oil is 'sour' oil, meaning it has a high sulphur content, which California refineries aren't equipped to process in sufficient quantity. One of the solutions for this set of dilemmas is to sell Alaskan oil to Japan, which does have the capacity to refine sour crude, but there is a law against exporting Alaskan oil. To get round that, it's been proposed that the Alaskan oil be swapped for Mexican oil, which has been contracted for by Japan. Since Alaska is much closer to Japan than Mexico, which is closer to the refineries of Texas and Louisiana, vast amounts of money can be saved in transportation charges. If Japan took enough Alaskan oil, this would allow the Indonesian and Arabian sources of oil to go to Western Europe; in this fashion all of the industrial nations could live happily for an indefinite period until the Iranians come back into production.

This miraculously elaborate scheme may remain just that. The Mexicans are feeling rather annoyed with their big gringo brothers from the other side of the Rio Grande. Last year, for reasons that only make sense to those who believe in astrol ogy and UFOs, a Mexican offer to sell natural gas was refused by the Secretary of Energy, James Schlesinger, the last man on this continent still able to con people into thinking he's smart because he talks slowly and puffs on a pipe. In addition, the Mex icans, who have an ineffably large proven oil reserve and the real possibility of yet larger, still unproven energy sources, have seen what too much oil money too fast has done to places like Venezuela, Saudi Arabia and, of course, Iran. In order to promote orderly, non-disruptive economic growth the Mexicans have been talking about very modest increases in crude production.

Such should have been the policy in Alaska, where wells have already been drilled and must be used in the not too distant future. Otherwise, they will have to be redrilled at impressive cost. But max imum production brings with it another problem, namely what to do with the 26 trillion cubic feet of natural gas down there with the oil. There are no present facilities for getting it out of Alaska in any direction, and while it's possible to keep it under ground for a while, at some point the gas must start coming up with the crude, in which case it must either be piped away or flared — an unpardonable waste.

The President's flamboyant younger brother, Billy, has flared yet another time.

He was caught by the press urinating in public although, since he seems not to have done it on their trouser legs and pantyhose, on wonders why the story had to be leaked to an America already waterlogged from bad winter weather. This minor act of grossness was followed by Billy playing host to a delegation of Libyans, a very unpopular nation in these parts. The truculent, beer swilling younger brother who is not without a certain insouciant, Southern rural charm, then defended himself against accusations that he was befriending terrorists and hijackers by making a wise crack about Jewish-owned media and observing that 'there's more Arabians [Georgian for Arab] than there's Jews.'