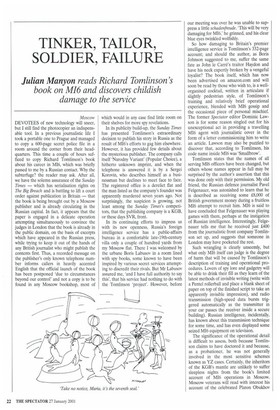 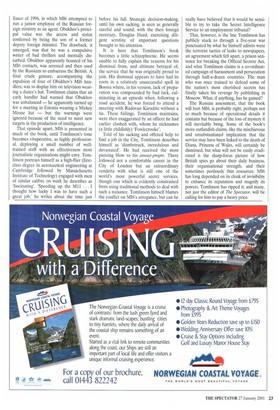 book on M16 and discovers childish damage to the service

Moscow DEVOTEES of new technology will sneer, but I still find the photocopier an indispensable tool. In a previous journalistic life I took a portable one to Prague and managed to copy a 600-page secret police file in a room around the corner from their headquarters. This time a couple of hours sufficed to copy Richard Tomlinson's book about his career in MI6, which was briefly passed to me by a Russian contact. Why the subterfuge? the reader may ask. After all, we have the solemn assurance of the Sunday Times — which has serialisation rights on The Big Breach and is battling to lift a court order against publication in Britain — that the book is being brought out by a Moscow publisher and is already circulating in the Russian capital. In fact, it appears that the paper is engaged in a delicate operation attempting simultaneously to convince the judges in London that the book is already in the public domain, on the basis of excerpts which have appeared in the Russian press, while trying to keep it out of the hands of any British journalist who might publish the contents first. Thus, a recorded message on the publisher's only known telephone number informs callers in heavily accented English that the official launch of the book has been postponed 'due to circumstances beyond our control' and not a copy is to be found in any Moscow bookshop, most of which would in any case find little room on their shelves for more spy revelations.

In its publicity build-up, the Sunday Times has presented Tomlinson's extraordinary decision to publish his story in Russia as the result of MI6's efforts to gag him elsewhere. However, it has provided few details about the mysterious publisher. The company calls itself `Narodny Variant' (Popular Choice), a hitherto unknown imprint, and when the telephone is answered it is by a Sergei Korovin, who describes himself as a businessman but declines to meet face to face. The registered office is a derelict flat and the man listed as the company's founder was apparently murdered seven years ago. Not surprisingly, the suspicion is growing, not least among the Sunday Times's competitors, that the publishing company is a KGB, or these days SVR, front.

In its continuing efforts to impress us with its new openness, Russia's foreign intelligence service has a public-affairs bureau in a comfortable late-19th-centiny villa only a couple of hundred yards from my Moscow flat. There I was welcomed by the urbane Boris Labusov in a room lined with spy books, some known to have been inspired by various secret services attempting to discredit their rivals. But Mr Labusov assured me, 'and I have full authority to say this', that his service had nothing to do with the Tomlinson 'project'. However, before our meeting was over he was unable to suppress a little schadenfreude. 'This will be very damaging for MI6,' he grinned, and his clear blue eyes twinkled wolfishly.

So how damaging to Britain's premier intelligence service is Tomlinson's 332-page account; and should the author, as Boris Johnson suggested to me, suffer the same fate as John le Carre's traitor Haydon and have his neck expertly broken by a vengeful loyalist? The book itself, which has now been advertised on amazon.com and will soon be read by those who wish to, is a wellorganised cocktail, written in articulate if slightly pedestrian style, of Tomlinson's training and relatively brief operational experience, blended with MI6 gossip and the occasional piece of personal mischief. The former Spectator editor Dominic Lawson is for some reason singled out for his unexceptional act in providing a travelling MI6 agent with journalistic cover in the form of a letter commissioning him to write an article. Lawson may also be puzzled to discover that, according to Tomlinson, his code name inside MI6 was `Smallbrow'.

Tomlinson states that the names of all serving MI6 officers have been changed, but others whose names appear in full may be surprised by the author's assertion that this was done only with their permission. My old friend, the Russian defence journalist Pavel Felgenauer, was astonished to learn that he is described as receiving some £8,000 of British government money during a fruitless MI6 attempt to recruit him. MI6 is said to have concluded that Felgenauer was playing games with them, perhaps at the instigation of Russian intelligence. Interestingly, Felgenauer tells me that he received just £400 from the journalistic front company Tomlinson set up, and suggests that someone in London may have pocketed the rest.

Such wrangling is clearly unseemly, but what only MI6 itself can judge is the degree of harm that will be caused by Tomlinson's description of training and operational procedures. Lovers of spy lore and gadgetry will be able to drink their fill as they learn of the latest methods of invisible writing (write with a Pentel rollerball and place a blank sheet of paper on top of the finished script to take an apparently invisible impression), and radio transmission (high-speed data bursts triggered automatically as the transmitter in your car passes the receiver inside a secure building). Russian intelligence, incidentally, has known about this transmission technique for some time, and has even displayed some seized MI6 equipment on television.

The significance of the operational detail is difficult to assess, both because Tomlinson claims to have doctored it and because, as a probationer, he was not generally involved in the most sensitive schemes known as YZ cases. Certainly, the inheritors of the KGB's mantle are unlikely to suffer sleepless nights from the book's limited account of MI6 operations in Moscow. Moscow veterans will read with interest his account of the celebrated Platon Obukhov fiasco of 1996, in which MI6 attempted to run a junior employee of the Russian foreign ministry as an agent. Obukhov's principal value was the access and status conferred by being the son of a former deputy foreign minister. The drawback, it emerged, was that he was a compulsive writer of bad thrillers and mentally disturbed. Obukhov apparently boasted of his MI6 contacts, was arrested and then used by the Russians to embarrass the British. A final crude gesture, accompanying the expulsion of four of Obukhov's MI6 handlers, was to display him on television wearing a dunce's hat. Tomlinson claims that an early handler had warned that Obukhov was unbalanced — he apparently turned up for a meeting in Estonia wearing a Mickey Mouse hat — but the warnings were ignored because of the need to meet new targets in the production of intelligence.

That episode apart, MI6 is presented in much of the book, until Tomlinson's tone becomes vituperative, as highly professional, deploying a small number of welltrained staff with an effectiveness most journalistic organisations might envy. Tomlinson portrays himself as a high-flier (firstclass degree in aeronautical engineering at Cambridge followed by Massachusetts Institute of Technology) engaged with men of similar calibre on work he describes as 'fascinating'. 'Speeding up the M11 . I thought how lucky I was to have such a great job,' he writes about the time just before his fall. Strategic decision-making, until his own sacking, is seen as generally careful and sound, with the then foreign secretary, Douglas Hurd, exercising diligent scrutiny of important questions brought to his attention.

It is here that Tomlinson's book becomes a little schizophrenic. He seems unable to fully explain the reasons for his dismissal from, and ultimate betrayal of, the service that he was originally proud to join. His dismissal appears to have had its roots in a relatively unsuccessful spell in Bosnia where, in his version, lack of preparation was compounded by bad luck, culminating in an episode when, following a road accident, he was forced to attend a meeting with Radovan Karadzic without a tie. These failings, Tomlinson maintains, were then exaggerated by an officer he had earlier clashed with, whom he nicknames (a little childishly) 'Fowlecrooke'.

Told of his sacking and offered help to find a job in the City, Tomlinson describes himself as 'dumbstruck, incredulous and devastated'. He had received the most piercing blow to his amour-propre. There followed not a comfortable career in the City of London but an extraordinary vendetta with what is still one of the world's most powerful secret services, though one which is evidently constrained from using traditional methods to deal with such a nuisance. Tomlinson himself blames the conflict on MI6's arrogance, but can he

really have believed that it would be sensible to try to take the Secret Intelligence Service to an employment tribunal?

That, however, is the line Tomlinson has publicly stuck to through a five-year war punctuated by what he himself admits were the terrorist tactics of leaks to newspapers, an agreement which fell apart, a prison sentence for breaking the Official Secrets Act, and what Tomlinson claims is a co-ordinated campaign of harassment and persecution through half-a-dozen countries. The man who was once trained to defend some of the nation's most cherished secrets has finally taken his revenge by publishing in Moscow. What, if anything, has he gained?

The Russian assessment, that the book will hurt MI6, is probably right, perhaps not so much because of operational details it contains but because of the loss of mystery it will inevitably bring. Some of the book's more outlandish claims, like the mischievous and unsubstantiated implication that the service may have been linked to the death of Diana, Princess of Wales, will certainly be dismissed, but what will not be easily eradicated is the sharp-focus picture of how British spies go about their daily business, their organisational strength, and their sometimes perilously thin resources. MI6 has long depended on its cloak of invisibility to enhance its reputation and magnify its powers. Tomlinson has ripped it and many, not just the editor of The Spectator, will be calling for him to pay a heavy price.