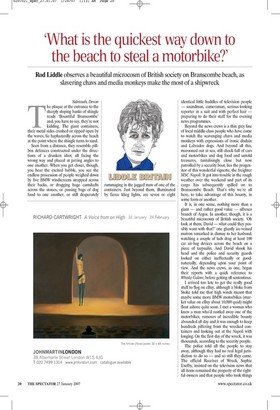 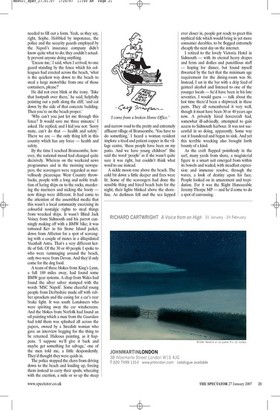 'What is the quickest way down to the beach to steal a motorbike?'

Rod Liddle observes a beautiful microcosm of British society on Branscombe beach, as slavering chavs and media monkeys make the most of a shipwreck Sidmouth, Devon The plaque at the entrance to the sharply sloping banks of shingle reads 'Bountiful Branscombe' and, you have to say, they're not kidding. The giant containers, their metal sides crushed or ripped open by the waves, lie haphazardly across the beach at the point where the shingle turns to sand.

Seen from a distance, they resemble pillbox defences constructed under the directions of a drunken idiot, all facing the wrong way and placed at jarring angles to one another. When you get closer, though, you hear the excited babble, you see the endless procession of people weighed down by five BMW windscreens strapped across their backs, or dragging huge camshafts across the stones, or passing bags of dog food to one another, or still desperately rummaging in the jagged maw of one of the containers. Just beyond them, illuminated by fierce klieg lights, are seven or eight identical little huddles of television people — soundman, cameraman, serious-looking reporter in a suit and with perfect hair — preparing to do their stuff for the evening news programmes.

Beyond the news crews is a thin grey line of local middle-class people who have come to watch the scavenging chavs and media monkeys with expressions of ironic disdain and Labrador dogs. And beyond all this, marooned out at sea, still chock-full of cars and motorbikes and dog food and untold treasures, tantalisingly close but now patrolled by a security boat, lies the progenitor of this wonderful vignette, the freighter MSC Napoli. It got into trouble in the rough weather over the weekend and part of its cargo has subsequently spilled on to Branscombe Beach. That's why we're all here, to take advantage of this bounty, in some form or another.

It is, in one sense, nothing more than a giant — and rather good value — alfresco branch of Argos. In another, though, it is a beautiful microcosm of British society. 'Oh look at them, David — what could they possibly want with that?' one ghastly ice-veined matron remarked in dismay to her husband, watching a couple of lads drag at least 100 car air-bag devices across the beach on a piece of tarpaulin. And David shook his head and the police and security guards looked on either ineffectually or goodnaturedly, depending upon your point of view. And the news crews, as one, began their reports with a quick reference to Whisky Galore, before getting all sententious.

I arrived too late to get the really good stuff to flog on eBay, although a bloke from Stoke told me that high winds meant that maybe some more BMW motorbikes (market value on eBay about 10,000 quid) might float ashore quite soon. I met a woman who knew a man who'd rustled away one of the motorbikes; rumours of incredible bounty abounded all day and it was enough to keep hundreds pilfering from the wrecked containers and looking out at the Napoli with longing. On the first day of the wreck, it was thousands, according to the security people.

The police told all the people to stay away, although they had no real legal jurisdiction to do so — and so still they came. The official Receiver of Wreck, Sophie Exelby, insisted on the television news that all items remained the property of the rightful owners and that people who took things needed to fill out a form. Yeah, as they say, right, Sophe. Hobbled by impotence, the police and the security guards employed by the Napoli's insurance company didn't know quite what to do; they couldn't actually prevent anyone doing anything.

'Excuse me,' I said, when I arrived, to one guard standing by the fence which his colleagues had erected across the beach, 'what is the quickest way down to the beach to steal a large motorbike from one of those containers, please?'

He did not even blink at the irony. 'Take that footpath over there,' he said, helpfully pointing out a path along the cliff, 'and cut down by the side of that concrete building. Then you're on the beach proper.'

'Why can't you just let me through this fence? It would save me three minutes.' I asked. He replied, and I kid you not: 'Sorry mate, can't do that — health and safety.' There we are — the only thing left in this country which has any force — health and safety.

By the time I reached Branscombe, however, the national mood had changed quite decisively. Whereas on the weekend news programmes and in the morning newspapers, the scavengers were regarded as marvellously picaresque West Country throwbacks, people with a long and noble tradition of luring ships on to the rocks, murdering the mariners and nicking the booty — now things were different. It had come to the attention of the assembled media that this wasn't a local community exercising its colourful nostalgic rights to steal things from wrecked ships. It wasn't Blind Jack Voisey from Sidmouth and his parrot cunningly making off with a BMW bike; it was tattooed Key in his Stone Island jacket, down from Alfreton for a spot of scavenging with a couple of mates in a dilapidated Vauxhall Astra. That's a very different kettle of fish. Of the 30 or 40 people I spoke to who were rummaging around the beach, only two were from Devon. And they'd only come for the dog food.

A team of three blokes from King's Lynn, a full 180 miles away, had found some BMW gear systems. A chap from Wales had found the silver salver stamped with the words 'MSC Napoli'. Some cheerful young people from Derbyshire made off with rubber sprockets and the casing for a car's rear brake light. It was south Londoners who were spiriting away the car windscreens. And the blokes from Norfolk had found an oil painting which a man from the Guardian had told them was splashed all across the papers, owned by a Swedish woman who gave an interview begging for the thing to be returned. Hideous painting, as it happens. 'I suppose we'll give it back and maybe get something for salvage,' one of the men told me, a little despondently. They'd thought they were quids in.

The police stopped the chavs from driving down to the beach and loading up, forcing them instead to carry their spoils, wheezing with the exertion, a mile or so up the steep and narrow road to the pretty and extremely affluent village of Branscombe. 'You have to do something,' I heard a woman resident implore a tired and patient copper in the village centre, 'these people have been on my patio. And we have young children!' She said the word 'people' as if she wasn't quite sure it was right, but couldn't think what word to use instead.

A sickle moon rose above the beach. The cold bit down a little deeper and fires were lit. Some of the scavengers had done the sensible thing and hired beach huts for the night; their lights blinked above the shoreline. As darkness fell and the sea lapped ever closer in, people got ready to greet this mythical tide which would bring in yet more consumer durables, to be flogged extremely cheaply the next day on the internet.

I retired to the lovely Victoria Hotel in Sidmouth — with its eternal heavy drapes and ferns and doilies and punctilious staff — hoping for dinner, but found myself thwarted by the fact that the minimum age requirement for the dining-room was 86. Instead, I sat in the bar with a drip feed of genteel alcohol and listened to one of the younger locals — he'd have been in his late seventies, I would guess — talk about the last time there'd been a shipwreck in these parts. They all remembered it very well, though it must have been 30 or 40 years ago now. A privately hired hovercraft had, somewhat ill-advisedly, attempted to gain access to Sidmouth harbour. It was not successful in so doing, apparently. Some way out it foundered and began to sink. And yet this terrible wrecking also brought forth bounty of a kind.

As the craft flapped pointlessly in the surf, many yards from shore, a magisterial figure in a smart suit emerged from within its bowels and waded, with steadfast expression and immense resolve, through the waves, a look of destiny upon his face. People looked on in amazement and trepidation. For it was the Right Honourable Jeremy Thorpe MP — and he'd come to do a spot of canvassing.