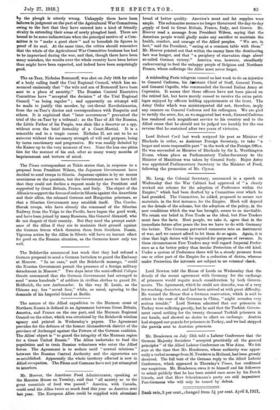 Page 3, 27 July 1918 — The nature of the Allied expedition to the Murman coast
Close

The nature of the Allied expedition to the Murman coast

of Northern Russia is defined in an Agreement between Great Britain, America, and France on the one part, and the Murman Regional Council on the other, which was circulated by the Bolshevik wireless agency and printed in Wednesday's papers. The Agreement provides for the defence of the former Akxandrovsk district of the province of Archangel against the Powers of the German coalition. The Allies' object is "to guard the integrity of the Murman region for a Great United Russia." The Allies undertake to feed the population and to train Russian volunteers who enter the Allied forces. The Agreement is to endure until "normal relations" between the Russian Central Authority and the signatories are re-established. Apparently the whole territory affected is now in Allied occupation. The Finns and Germans have not yet attempted to interfere.