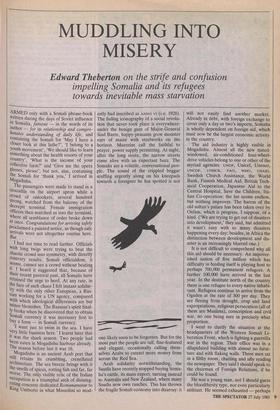 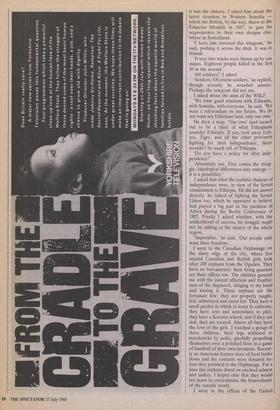 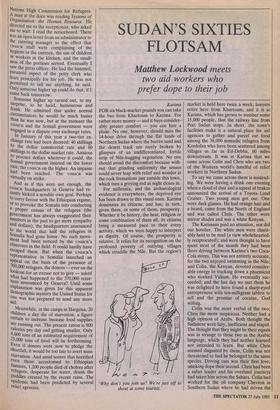 ARMED only with a Somali phrase-book written during the days of Soviet influence ot Somalia, famous — in the words of its author — for its relationship and compre- hensive understanding of daily life, and Containing the Somali for 'May I have a Closer look at this lathe?', 'I belong to a Youth movement', 'We should like to learn something about the health resorts of your country', 'What is the income of your collective farm?' and 'Give me the opera glasses, please'; but not, alas, containing the Somali for 'thank you,' I arrived in Mogadishu.

The passengers were made to stand in a crocodile on the airport apron while a crowd of onlookers, several hundred strong, watched from the balcony of the decrepit terminal. Female immigration Officers then marched us into the terminal, Where all semblance of order broke down at once. Congratulations for arriving safely Proclaimed a painted notice, as though safe arrivals were not altogether routine here. 'Jut.. ,

had not time to read further. Officials With long twigs were trying to beat the chaotic crowd into symmetry, with directly contrary results. Somali officialdom, it Seems, cannot see a crowd without beating it. I heard it suggested that, because of their recent pastoral past, all Somalis have retained the urge to herd. At any rate, in the face of such chaos I felt instant solidar- ity with the only other European, a Rus- sian working for a UN agency, compared with which ideological differences are but minor blemishes. The Russian's spirit final- ly broke when he discovered that to obtain Somali currency it was necessary first to buy a form — in Somali currency. 'I want just to swim in the sea. I have very little business here.' I learnt later that it was the shark season. Two people had been eaten in Mogadishu harbour already. The season before last it was 16.

.Mogadishu is an ancient Arab port that still retains its crumbling, crenellated architecture. The sea breeze brings with it the smells of spices, rotting fish and far, far worse. The only visible relic of the Italian occupation is a triumphal arch of disinteg- rating concrete dedicated Romanamente to King Umberto in what Mussolini so mod- estly had inscribed as ANNO vi (i.e. 1928). The fading iconography of a social revolu- tion that never took place is everywhere: under the benign gaze of Major-General Siad Barre, happy peasants grow monster ears of maize with steelworks on the horizon. Muezzins call the faithful to prayer, power supply permitting. At night, after the long siesta, the narrow streets come alive with an expectant buzz. The Somalis are a volatile, conversational peo- ple. The sound of the crippled beggar scuffing urgently along on his kneepads towards a foreigner he has spotted is not

one likely soon to be forgotten. But for the most part the people are tall, fine-featured and elegant, occasionally calling them- selves Arabs to extract more money from across the Red Sea.

Arab solidarity notwithstanding, the Saudis have recently stopped buying Soma- lia's cattle, its main export, turning instead to Australia and New Zealand, where many Saudis now own ranches. This has thrown the fragile Somali economy into disarray: it will not easily find another market. Already in debt, with foreign exchange to cover only a day or two's imports, Somalia is wholly dependent on foreign aid, which must now be the largest economic activity in the country.

The aid industry is highly visible in Mogadishu. Almost all the new tinted- windowed, air-conditioned four-wheel- drive vehicles belong to one or other of the myriad agencies. UNDP, Unicef, Unesco, UNCDF, UNHCR, FAO, WHO, USAID,

Swedish Church Assistance, the World Bank, Finnish Medical Aid, British Tech- nical Cooperation, Japanese Aid to the Central Hospital, Save the Children, Ita- lian Co-operation: the list seems endless, but nothing improves. The harem of the old sultan's palace has been taken over by Oxfam, which is progress, I suppose, of a kind. ('We are trying to get out of disasters into development,' they said, but admitted it wasn't easy with so many disasters happening every day; besides, in Africa the distinction between development and dis- aster is an increasingly blurred one.) It is not difficult to comprehend why all this aid should be necessary. An impover- ished nation of five million which has difficulty in feeding itself is playing host to perhaps 700,000 permanent refugees. A further 100,000 have arrived in the last year. In the destitute north of the country there is one refugee to every native inhabi- tant. Refugees continue to arrive from the Ogaden at the rate of 300 per day. They are fleeing from drought, crop and land expropriations, religious persecution (all of them are Muslims), conscription and civil war, no one being sure in precisely what proportion.

I went to clarify the situation at the headquarters of the Western Somali Li- beration Front, which is fighting a guerrilla war in the region. Their office was in a dilapidated building with almost no furni- ture and with flaking walls. Three men sat in a filthy room, chatting and idly reading the newspaper. They said I should speak to the chairman of Foreign Relations, if he could be found.

He was a young man, not I should guess the bloodthirsty type, nor even particularly militant. He seemed exhausted — perhaps it was the climate. I asked him about the latest situation in Western Somalia — which the British, by the way, threw to the Emperor Menelik in 1897, to gain his acquiescence to their own designs else- where in Somaliland.

'I have just received this telegram,' he said, pushing it across the desk. It was in Somali.

'It says two trucks were blown up by our mines. Eighteen people killed in the first 30 in the second.'

'All soldiers?' I asked.

'Soldiers. Of course soldiers,' he replied, though actually he sounded unsure. Perhaps the telegram did not say.

I asked about the aims of the WSLF.

'We want good relations with Ethiopia, with Somalia, with everyone,' he said. 'We want a referendum on our future. We do not want any Ethiopian land, only our own.' He drew a map. 'Our own' land turned out to be a third of what Ethiopians consider Ethiopia. If you took away Erit- rea, Tigre, and all the other provinces fighting for their independence, there wouldn't be much left of Ethiopia, `Do you have a policy for after inde- pendence?'

'Absolutely not. First comes the strug- gle. Ideological differences may emerge — it is a possibility.' I asked him what the realistic chances of independence were, in view of the Soviet commitment to Ethiopia. He did not answer directly: he talked of fighting the Soviet Union too, which he appeared to believe had played a big part in the partition of Africa during the Berlin Conference of 1885. Finally I asked whether, with the unlikelihood of success, his struggle might not be adding to the misery of the whole region.

'Impossible,' he said. 'Our people only want their freedom.'

I went to the Canadian Orphanage on the dusty edge of the city, where five unpaid Canadian and British girls look after 200 orphans from the Ogaden. They have no bureaucracy: their living quarters are their offices too. The children greeted me with the instant affection and trustful- ness of the displaced, clinging to my hand and kissing it. These orphans are the fortunate few: they are properly taught, fed, stimulated and cared for. They have a small garden in which to learn to cultivate; they have toys and somewhere to play; they have a Koranic school; and if they are sick, they are treated. Above all they have the love of the girls. I watched a group of these children, their legs withered to matchsticks by polio, gleefully propelling themselves over a polished floor in a game of handball of their own invention. Recent- ly an American freezer store of food broke down and the contents were donated be- fore they perished to the Orphanage. For a time the orphans dined on smoked salmon and turkey. I hoped only that they would not learn to overestimate the benevolence of the outside world.

I went to the offices of the United Nations High Commission for Refugees. A man at the door was reading Systems of Organisation: the Human Resource. He directed me to the receptionist, who asked me to wait. I read the noticeboard. There was an open letter from an administrator to the catering manager to the effect that UNHCR staff were complaining of the hygiene in the canteen, the use of children as workers in the kitchen, and the small- ness of the portions served. Eventually I saw the press officer. He had the haunted, paranoid aspect of the petty clerk who fears principally for his job. He was not permitted to tell me anything, he said. Only someone higher up could do that, if I came back tomorrow.

Someone higher up turned out, to my surprise, to be lucid, humourous and frank. He admitted that under normal circumstances he would be much busier than he was now, but at the moment the LINFicu and the Somali government were engaged in a dispute over exchange rates. In January of this year a two-tier ex- change rate had been decreed: 40 shillings to the dollar commercial rate and 80 :shillings to the dollar market rate. Anxious to procure dollars wherever it could, the :Somali government insisted on the lower .rate; the UNHCR on the higher. An impasse had been reached. The UNHCR was 'virtually on strike.

And as if this were not enough, the um-icR headquarters in Geneva had re- cently kicked a notable own goal. Perhaps to curry favour with the Ethiopian regime, or to provoke the Somalis into conducting a proper census of the refugees (the government has always exaggerated their numbers in the past to get more sympathy and dollars), the headquarters announced to the world that half the refugees in Somalia had gone home. No such move- ment had been noticed by the UNHCR'S Observers in the field. It could hardly have escaped them. But when the uNircR's representative in Somalia launched an appeal on the basis of the presence of 700,000 refugees, the donors — ever on the lookout for an excuse not to give — asked What had happened to the 370,000 retur- nees announced by Geneva? Until some explanation was given for this apparent demographic mystery the United States for 0.ne was not prepared to send any more Meanwhile, in the camps in Hargeisa, 20 Children a day die of starvation, a figure certain to increase because food supplies are running out. The present ration is 800 calories per day and getting smaller. Only 4,600 tons of an estimated requirement of 25,000 tons of food will be forthcoming. Even if donors were now to pledge the shortfall, it would be too late to avert mass starvation. And amid scenes that horrified even those accustomed to Ethiopian famines, 1,200 people died of cholera after refugees, desperate for water, drank the Puddles created by the recent rains. The epidemic had been predicted by several relief agencies.