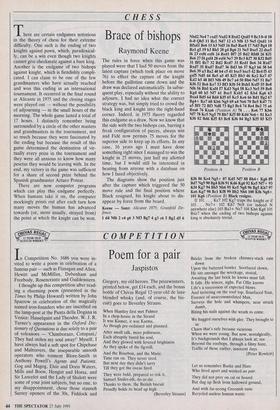 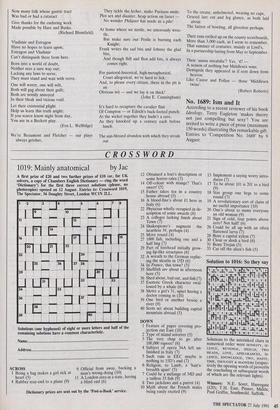 Poem for a pair

In Competition No. 1686 you were in- vited to write a poem in celebration of a famous pair— such as Flanagan and Allen, Hewitt and McMillan, Debenham and Freebody, Rosencrantz and Guildenstern.

I thought up this competition after read- ing a charming poem (presented in the Times by Philip Howard) written by John Sparrow in celebration of the magically named iron-founders who are inscribed on the lamp-post at the Punta della Dogana in Venice: Hasselquist and Theodor. W. J. R. Turner's appearance in the Oxford Dic- tionary of Quotations is due solely to a pair of volcanoes — 'Chimborazo, Cotopaxi,/ They had stolen my soul away!' Myself, I have always had a soft spot for Chipchase and Maltravers, the inseparable smooth operators who torment Blore-Smith in Anthony Powell's Agents and Patients. Gog and Magog, Elsie and Doris Waters, Mills and Boon, Hengist and Horsa, and Sir Lancelot and the Lady of Shalott were some of your joint subjects, but no one, to my disappointment, chose those staunch Surrey openers of the 30s, Fishlock and Gregory, my old heroes. The prizewinners, printed below, get £14 each, and the bonus bottle of Chivas Regal 12-year-old de luxe• blended whisky (and, of course, the bis- cuit) goes to Beverley Strauss.

When Huntley first met Palmer In a chop-house in the Strand It was Kismet, it was Karma, As though pre-ordained and planned.

After small talk, mere politeness, Each abruptly bared his soul, And they glowed with fevered brightness As they spoke of the fig-roll, And the Bourbon, and the Marie. Time ran on. They never tired. But next day they didn't tarry Till they got the ovens fired.

They were bold, prepared to risk it, Samuel Smiles-ish, do-or-die.

Thanks to them, the British biscuit Proudly holds its head up high.

(Beverley Strauss) Bricks from the broken chimney-stack rain down Upon the battered bowler. Sootfaced clown, He sits amongst the wreckage, stoical, Awaiting the last brick he knows must fall. It falls. He winces, sighs. Fat 011ie knows Life's a succession of expected blows.

And teetering on the roof top, flourfaced Stan, Essence of unaccommodated Man, Surveys the hole and whimpers, near struck dumb, Biting his nails against the wrath to come.

We hugged ourselves with glee. They brought to us Chaos that's safe because vicarious When we were young. But now, nostalgically, It's backgrounds that I always look at; see Beyond the rooftops, through a filmy haze, Traffic of those earlier, innocent days.

They did not prey on cat or hound But dug up flesh from hallowed ground, And with far-seeing Greenish taste Recycled useless human waste. Now many folk whose gastric tract Was bad or had a cataract Give thanks for the enduring work Made possible by Hare and Burke.

(Richard Blomfield) Vladimir and Estragon Have no hopes to learn upon; Estragon and Vladimir Can't distinguish there from here.

Born into a world of doubt, Neither sees a sure way out; Lacking any laws to serve, They must stand and wait with verve.

One will waver, one will wilt, Both will gag about their guilt; Both are noisily annoyed In their bleak and vicious void.

Let their existential plight Help us learn this truth aright: If you scarce know night from day, You are in a Beckett play. (Ern L. Wel[bilge) We're Beaumont and Fletcher — our plays always getcher, They tickle the lecher, make Puritans smile: Plot sex and disaster, heap action on faster No wonder Philaster has made us a pile!

At home where we nestle, we amorously wres- tle, But make sure our Pestle is burning each Knight; Frank writes the sad bits and Johnny the glad bits, And though Bill and Ben add bits, it always comes right.

For pastoral-historical, high-metaphorical, Court-allegorical, we're hard to lick: And, to please every citizen, there in the pit is an Obvious wit — and we lay it on thick!

(John E. Cunningham) It's hard to recapture the cavalier flair Of Compton — or Edrich's back-footed punch: At the wicket together they hadn't a care, As they knocked up a century each before lunch.

The sun-blessed abandon with which they strode out To the crease, unhelmeted, wearing no caps, Graced late cut and leg glance, as both laid about The fastest of bowling, all gloveless perhaps.

Their runs rattled up on the county scoreboards, More than 3,000 each, as I seem to remember, That summer of centuries, mainly at Lord's, In a partnership lasting from May to September.

Their 'annus mirabilis'? Yes, '47 - A season of nothing but Middlesex wins: Demigods they appeared as if sent down from heaven Like Castor and Pollux — those 'Middlesex twins'.