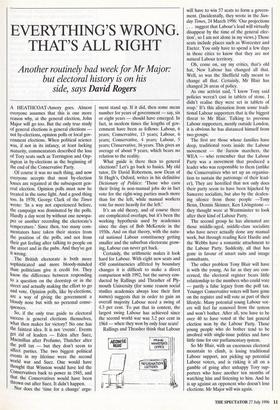 Another routinely bad week for Mr Major: but electoral history is on his side, says David Rogers

A HEATHCOAT-Amory goes. Almost everyone assumes that this is one more reason why, at the general election, John Major will go too. But the only true study of general elections is general elections not by-elections, opinion polls or local gov- ernment elections. When political science was, if not in its infancy, at least lacking maturity, commentators described the loss of Tory seats such as Torrington and Orp- ington in by-elections as the beginning of the end of the Conservative Party.

Of course it was no such thing, and now everyone accepts that most by-election losses are regained at the subsequent gen- eral election. Opinion polls must now be treated in the same light. And a good thing too. In 1970, George Clark of the Times wrote: 'In a way not experienced before, the campaign was dominated by the polls. Hardly a day went by without one newspa- per or another recording the electorate's temperature.' Since then, too many com- mentators have taken their stories from the position of the polls, and not from their gut feeling after talking to people on the street and in the pubs. And they've got it wrong.

The British electorate is both more sophisticated and more bloody-minded than politicians give it credit for. They know the difference between responding to a question on the doorstep or in the street and actually making the effort to go and vote. Opinion polls, like by-elections, are a way of giving the government a bloody nose but with no personal conse- quences.

So, if the only true guide to electoral success is general elections themselves, what then makes for victory? No one has the faintest idea. It is not 'events'. Events get rid of leaders — Eden after Suez, Macmillan after Profumo, Thatcher after the poll tax — but they don't seem to affect parties. The two biggest political events in my lifetime were the second world war and Suez. One would have thought that Winston would have led the Conservatives back to power in 1945, and that the Conservatives would have been thrown out after Suez. It didn't happen. Nor does the time for a change' argu- ment stand up. If it did, then some mean number for years of government — say, six or eight years — should have emerged. In fact, in modern times the lengths of gov- ernment have been as follows: Labour, 6 years; Conservative, 13 years; Labour, 6 years; Conservative, 4 years; Labour, 5 years; Cbnservative, 16 years. This gives an average of about 9 years, which bears no relation to the reality.

What guide is there then to general elections? Let's go back to basics. My old tutor, Dr David Robertson, now Dean of St Hugh's, Oxford, writes in his definitive Dictionary of Politics: 'Those who earn their living in non-manual jobs do in fact vote for the right-wing parties much more than for the left, while manual workers vote far more heavily for the left.'

It's an old theory, and of course there are complicated overlaps, but it's been the working hypothesis used by academics since the days of Bob McKenzie in the 1950s. And on that theory, with the natu- ral national Labour constituency getting smaller and the suburban electorate grow- ing, Labour can never get back.

Certainly, the arithmetic makes it look hard for Labour. With eight new seats and 450 constituencies affected by boundary changes it is difficult to make a direct comparison with 1992; but the survey con- ducted by Railings and Thrasher of Ply- mouth University (for some reason social studies academics always lose their first names) suggests that in order to gain an overall majority Labour need a swing of 4.3 per cent. To put that in context, the largest swing Labour has achieved since the second world war was 3.2 per cent in 1964 — when they won by only four seats!

Railings and Thrasher think that Labour

will have to win 57 seats to form a govern- ment. (Incidentally, they wrote in the Sun- day Times, 24 March 1996: 'Our projections

. suggest that Labour's lead will virtually disappear by the time of the general elec- tion', so I am not alone in my views.) Those seats include places such as Worcester and Exeter. You only have to spend a few days in those cities to know that they are not natural Labour territory.

Oh, come on, say my critics, that's old hat, New Labour has changed all that. Well, so was the Sheffield rally meant to change all that. Certainly, Mr Blair has changed 26 areas of policy.

As one activist said, 'I know Tony said policies weren't cast in tablets of stone. I didn't realise they were set in tablets of soap.' It's this alienation from some tradi- tional Labour supporters that is the biggest threat to Mr Blair. Talking to previous Labour supporters, mostly outside London, it is obvious he has distanced himself from two groups.

The first are those whose families have deep, traditional roots inside the Labour movement — the -Jarrow marchers, the WEA — who remember that the Labour Party was a movement that produced a leader who was responsible to them (unlike the Conservatives who set up an organisa- tion to sustain the patronage of their lead- er), They are horrified that not only does their party seem to have been hijacked by Sancerre socialists, but also by the deafen- ing silence from those people —Tony Benn, Dennis Skinner, Ken Livingstone they thought were at Westminster to look after their kind of Labour Party.

The second group he has alienated are those middle-aged, middle-class socialists who have never actually done any manual work, but through reading Keir Hardie and the Webbs have a romantic attachment to the Labour Party. Suddenly, all that has gone in favour of smart suits and image consultants.

The other problem Tony Blair will have is with the young. As far as they are con- cerned, the electoral register bears little relationship to the numbers who could vote — partly a false legacy from the poll tax. Younger Conservative voters will have gone on the register and will vote as part of their lifestyle. Many potential young Labour vot- ers will feel far removed from the system and won't bother. After all, you have to be over 40 to have voted at the last general election won by the Labour Party. Those young people who do bother tend to be involved with single-issue politics and have little time for our parliamentary system.

So Mr Blair, with an enormous electoral mountain to climb, is losing traditional Labour support, not picking up potential Labour voters, and is risking it all on a gamble of going after unhappy Tory sup- porters who have another ten months of watching him and listening to him. And he is up against an opponent who doesn't lose elections. Mr Major will win again.