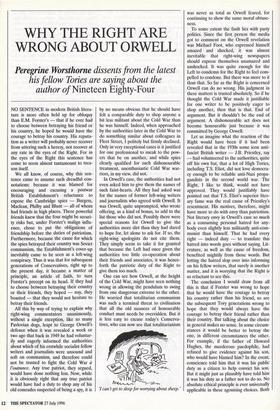 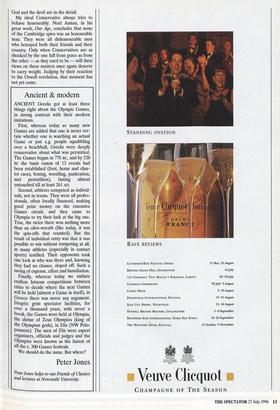 WHY THE RIGHT ARE WRONG ABOUT ORWELL

NO SENTENCE in modern British litera- ture is more often held up for obloquy than E.M. Forster's — that if he ever had to choose between betraying his friend or his country, he hoped he would have the courage to betray his country. His reputa- tion as a writer will probably never recover from uttering such a heresy, not recover at any rate in the eyes of the Right. For in the eyes of the Right this sentence has come to seem almost tantamount to trea- son itself.

We all know, of course, why this sen- tence came to assume such dreadful con- notations: because it was blamed for encouraging and excusing a postwar British Establishment's reluctance to expose the Cambridge spies — Burgess, Maclean, Philby and Blunt — all of whom had friends in high places. These powerful friends knew that the four might be securi- ty risks but, under Forster's malign influ- ence, chose to put the obligations of friendship before the duties of patriotism. Furthermore, because the cause for which the spies betrayed their country was Soviet communism, the Establishment's cover-up inevitably came to be seen as a left-wing conspiracy. Thus it was that for subsequent generations of Conservatives, right up to the present day, it became a matter of principle, an article of faith, to turn Forster's precept on its head. If they had to choose between betraying their country or their friends, they hoped — nay, they boasted — that they would not hesitate to betray their friends.

All this by way of trying to explain why right-wing commentators unanimously, without a single exception, like so many Pavlovian dogs, leapt to George Orwell's defence when it was revealed a week or two ago that back in 1949 he had voluntar- ily and eagerly informed the authorities about which of his erstwhile socialist fellow writers and journalists were unsound and soft on communism, and therefore could not be trusted to fight the Cold War Poutrance. Any true patriot, they argued, would have done nothing less. Now, while it is obviously right that any true patriot would have had a duty to shop any of his old comrades suspected of being a spy, it is

by no means obvious that he should have felt a comparable duty to shop anyone a bit less militant about the Cold War than he was himself. Indeed, when approached by the authorities later in the Cold War to do something similar about colleagues in Fleet Street, I politely but firmly declined. Only in very exceptional cases is it justified for one professional to sneak to the pow- ers that be on another, and while spies clearly qualified for such dishonourable treatment, unenthusiastic Cold War war- riors, in my view, did not.

In Orwell's case, the authorities had not even asked him to give them the names of such faint-hearts. All they had asked was for the names of former left-wing writers and journalists who agreed with Orwell. It was Orwell, quite unprompted, who wrote offering, as a kind of bonus, to add to the list those who did not. Possibly there were special reasons for Orwell to give the authorities more dirt than they had dared to hope for, let alone to ask for. If so, the right-wing apologists do not cite them. They simply seem to take it for granted that because the Left had once given the authorities too little co-operation about their friends and associates, it was hence- forth the patriotic duty of the Right to give them too much.

One can see how Orwell, at the height of the Cold War, might have seen nothing wrong in allowing the pendulum to swing from one dangerous extreme to the other. He worried that totalitarian communism was such a terminal threat to civilisation that all the old nuances of honourable conduct must needs be overridden. But it is less easy to excuse today's Conserva- tives, who can now see that totalitarianism I can't get to sleep for worrying about sheep.' was never as total as Orwell feared, for continuing to show the same moral obtuse- ness.

To some extent the fault lies with party politics. Since the first person the media got to comment on the Orwell revelation was Michael Foot, who expressed himself amazed and shocked, it was almost inevitable that right-wing newspapers should express themselves unamazed and unshocked. It was quite enough for the Left to condemn for the Right to feel com- pelled to condone. But there was more to it than that. So far as the Right is concerned Orwell can do no wrong. His judgment in these matters is trusted absolutely. So if he thought the Cold War made it justifiable for one writer to be positively eager to shop another, then that is that. End of argument. But it shouldn't be the end of argument. A dishonourable act does not become honourable just because it was committed by George Orwell.

Let us imagine what the reaction of the Right would have been if it had been revealed that in the 1930s some icon anti- fascist British writer — J.B. Priestley, say — had volunteered to the authorities, quite off his own bat, that a lot of High Tories, including T.S. Eliot, did not love democra- cy enough to be reliable anti-Nazi propa- gandists in the second world war. The Right, I like to think, would not have approved. They would justifiably have pointed out that T.S. Eliot's superior liter- ary fame was the real cause of Priestley's resentment. His motives, therefore, might have more to do with envy than patriotism. Not literary envy in Orwell's case so much as a consuming personal hatred for any- body even slightly less militantly anti-com- munist than himself. That he had every right — indeed duty — to translate this hatred into words goes without saying. Lit- erature, as well as the cause of freedom, benefited mightily from those words. But letting the hatred slop over into informing on his fellow writers, that surely is another matter, and it is worrying that the Right is so reluctant to see this.

The conclusion I would draw from all this is that if Forster was wrong to hope that he would have the courage to betray his country rather than his friend, so are the subsequent Tory generations wrong to hope that they would always have the courage to betray their friend rather than their country. But talking about the choice in general makes no sense. In some circum- stances it would be better to betray the one, in different circumstances the other. For example, if the father of Howard Hughes, the murderous paedophile, had refused to give evidence against his son, who would have blamed him? In the event, conscience told him that it was his public duty as a citizen to help convict his son. But it might just as plausibly have told him it was his duty as a father not to do so. No absolute ethical principle is ever universally applicable in these agonising choices. Both God and the devil are in the detail.

My ideal Conservative always tries to behave honourably. Noel Annan, in his great work, Our Age, concludes that none of the Cambridge spies was an honourable man. They were all dishonourable men who betrayed both their friends and their country. Only when Conservatives are as shocked by the one fall from grace as from the other — as they used to be — will their views on these matters once again deserve to carry weight. Judging by their reaction to the Orwell revelation, that moment has not yet come.