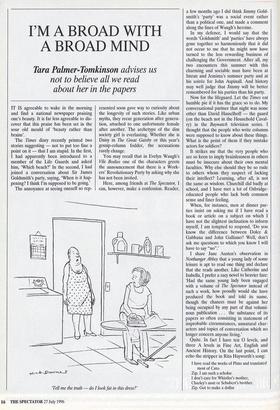 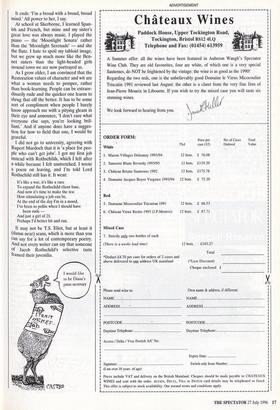 I'M A BROAD WITH A BROAD MIND

IT IS agreeable to wake in the morning and find a national newspaper praising one's beauty. It is far less agreeable to dis- cover that this praise has been set in the sour old mould of 'beauty rather than brains'.

The Times diary recently printed two stories suggesting — not to put too fine a point on it — that I am stupid. In the first, I had apparently been introduced to a member of the Life Guards and asked him, 'Which beach?' In the second, I had joined a conversation about Sir James Goldsmith's party, saying, 'When is it hap- pening? I think I'm supposed to be going.' The annoyance at seeing oneself so rep- resented soon gave way to curiosity about the longevity of such stories. Like urban myths, they recur generation after genera- tion, attached to one unfortunate female after another. The archetype of the dim society girl is everlasting. Whether she is Daisy in The Great Gatsby or this year's gossip-column fodder, the accusations rarely change.

You may recall that in Evelyn Waugh's Vile Bodies one of the characters greets the announcement that there is a Work- ers' Revolutionary Party by asking why she has not been invited.

Here, among friends at The Spectator, I can, however, make a confession. Reader,

'Tell me the truth — do I look fat in this dress?' a few months ago I did think Jimmy Gold- smith's 'party' was a social event rather than a political one, and made a comment along the lines of Waugh's heroine.

In my defence, I would say that the words 'Goldsmith' and 'parties' have always gone together so harmoniously that it did not occur to me that he might now have turned to the less rewarding business of challenging the Government. After all, my two encounters this summer with this charming and sociable man have been at Imran and Jemima's summer party and at his soirée for John Aspinall. And history may well judge that Jimmy will be better remembered for his parties than his party.

Now for the lifeguard. Let the Times eat humble pie if it has the grace so to do. My conversational partner that night was none other than David Hasselhoff — the guard (on the beach not in the Household Caval- ry) in the Baywatch television series. I thought that the people who write columns were supposed to know about these things. What is the point of them if they mistake actors for soldiers?

It strikes me that the very people who are so keen to imply brainlessness in others must be insecure about their own mental faculties. Why else should they be so rude to others whom they suspect of lacking their intellect? Learning, after all, is not the same as wisdom. Churchill did badly at school, and I have met a lot of Oxbridge- educated people who lack both common sense and finer feeling.

When, for instance, men at dinner par- ties insist on asking me if I have read a book or article on a subject on which I have not the slightest inclination to inform myself, I am tempted to respond, 'Do you know the difference between Dolce & Gabbana and John Galliano? Well, don't ask me questions to which you know I will have to say "no".'

I share Jane Austen's observation in Northanger Abbey that a young lady of some leisure is apt to read one thing and declare that she reads another. Like Catherine and Isabella, I prefer a racy novel to heavier fare: 'Had the same young lady been engaged with a volume of The Spectator instead of such a work, how proudly would she have produced the book and told its name, though the chances must be against her being occupied by any part of that volumi- nous publication . . . the substance of its papers so often consisting in statement of improbable circumstances, unnatural char- acters and topics of conversation which no longer concern anyone living.'

Quite. In fact I have ten 0 levels, and three A levels in Fine Art, English and Ancient History. On the last point, I can echo the stripper in Rita Hayworth's song:

I have read the works of Plato and translated most of Cato.

Zip. I am such a scholar.

I don't care for Whistler's mother, Charley's aunt or Schubert's brother. Zip. Got to make a dollar It ends: `I'm a broad with a broad, broad mind.' All power to her, I say.

At school at Sherborne, I learned Span- ish and French, but mine and my sister's great love was always music. I played the piano — the 'Moonlight Sonata' rather than the 'Moonlight Serenade' — and she the flute. I hate to spoil my tabloid image, but we grew up much more like the Ben- net sisters than the light-headed girls around town we are now portrayed as.

As I grow older, I am convinced that the Restoration values of character and wit are what a woman needs to prosper, rather than book-learning. People can be extraor- dinarily rude and the quicker one learns to shrug that off the better. It has to be some sort of compliment when people I barely know approach me with a pitying gleam in their eye and announce, 'I don't care what everyone else says, you're looking bril- liant.' And if anyone does have a sugges- tion for how to field that one, I would be grateful.

I did not go to university, agreeing with Rupert Murdoch that it is 'a place for peo- ple who can't get jobs'. I got my first job instead with Rothschilds, which I left after a while because I felt unstretched. I wrote a poem on leaving, and I'm told Lord Rothschild still has it. It went:

It's like a war, it's like a race To expand the Rothschild client base. And now it's time to make the tea: How stimulating a job can be.

At the end of the day I'm in a mood, I've been so polite when I should have been rude —

Perhaps I'd better hit and run.

It may not be T.S. Eliot, but at least it (damn near) scans, which is more than you can say for a lot of contemporary poetry. And not every writer can say that someone of Jacob Rothschild's selective taste framed their juvenilia.