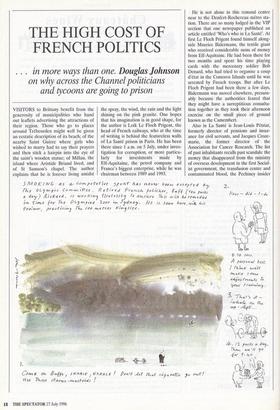 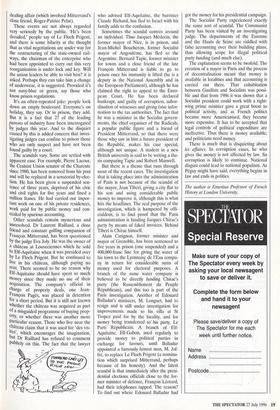 THE HIGH COST OF FRENCH POLITICS

. . . in more ways than one. Douglas Johnson on why across the Channel politicians and tycoons are going to prison

VISITORS to Brittany benefit from the generosity of municipalities who hand out leaflets advertising the attractions of their region. Those who go to places around Trebeurden might well be given an ecstatic description of its beach; of the nearby Saint Guirec where girls who wished to marry had to say their prayers and then stick a hairpin into the eye of the saint's wooden statue; of Milian, the island where Aristide Briand lived, and of St Samson's chapel. The author explains that he is forever living amidst the spray, the wind, the rain and the light shining on the pink granite. One hopes that his imagination is in good shape, for the author is Loik Le Floch Prigent, the head of French railways, who at the time of writing is behind the featureless walls of La Sante prison in Paris. He has been there since 1 a.m. on 5 July, under inves- tigation for corruption, or more particu- larly for investments made by Elf-Aquitaine, the petrol company and France's biggest enterprise, while he was chairman between 1989 and 1993. He is not alone in this remand centre near to the Denfert-Rochereau metro sta- tion. There are so many lodged in the VIP section that one newspaper published an article entitled 'Who's who in La Sante', At first Le Floch Prigent found himself along- side Maurice Bidermann, the textile giant who received considerable sums of money from Elf-Aquitaine. He had been there for two months and spent his time playing cards with the mercenary soldier Bob Denard, who had tried to organise a coup d'etat in the Comoros Islands until he was arrested by French troops. But after Le Floch Prigent had been there a few days, Bidermann was moved elsewhere, presum- ably because the authorities feared that they might have a surreptitious consulta- tion together as they took their afternoon exercise on the small piece of ground known as the Camembert.

Also in La Sante is Jean-Louis Petriat, formerly director of pensions and insur- ance for civil servants, and Jacques Croze- marie, the former director of the Association for Cancer Research. The list of past inhabitants recalls past scandals: the money that disappeared from the ministry of overseas development in the first Social- ist government, the transfusion centre and contaminated blood, the Pechiney insider dealing affair (which involved Mitterrand's close friend, Roger-Patrice Pelat).

These events are not always regarded very seriously by the public. `He's been derailed,' people say of Le Floch Prigent, and there is some hilarity at the thought that as vital negotiations are under way for the restructuring of the state-owned rail- ways, the chairman of the enterprise who had been appointed to carry out this very reorganisation is under lock and key. Will the union leaders be able to visit him? it is asked. Perhaps they can take him a change of underwear, it is suggested. Provided it's not navy-blue or green, say those who know prison regulations.

It's an often-repeated joke: people look down an empty boulevard. Everyone's on holiday, they say. Or in prison, they add. But it is a fact that 27 of the leading patrons of industry have been interrogated by judges this year. And to the disquiet caused by this is added concern that inves- tigating judges can confine to prison those who are only suspect and have not been found guilty by a court.

The scandals vary. Some are settled with apparent ease. For example, Pierre Lacour, the Centrist Union senator of the Charente since 1980, has been removed from his post and will be replaced in a senatorial by-elec- tion. He has been given a suspended sen- tence of three years, deprived of his civic and civil rights for five years and fined a million francs. He had carried out impor- tant work on one of his private residences, work paid for by public money and con- cealed by spurious accounting.

Other scandals remain mysterious and unresolved. Dr Laurent Raillard, a close friend and constant golfing companion of Francois Mitterrand, has been questioned by the judge Eva Joly. He was the owner of a chateau at Louveciennes which he sold to Elf-Aquitaine when it was presided over by Le Floch Prigent. But he continued to live in his chateau, although paying no rent. There seemed to be no reason why Elf-Aquitaine should have spent so much money since they made no use of their acquisition. The company's official in charge of property deals, one Jean- Francois Pages, was placed in detention for a short period. But it is still not known whether the château was acquired as part of a misguided programme of buying prop- erty, or whether there was another more Particular reason. Those who live near the FlAteau claim that it was used for 'des vis- nes', which encourages the imagination, but Dr Raillard has refused to comment Publicly on this. The fact that the lawyer who advised Elf-Aquitaine, the barrister Claude Richard, has fled to Israel with his family adds to the confusion.

Sometimes the scandal centres around an individual. Thus Jacques Medecin, the former mayor of Nice, is in prison, and Jean-Michel Boucheron, former Socialist mayor of Angouleme, has fled to the Argentine. Bernard Tapie, former minister for towns and a close friend of the late Francois Mitterrand is liable to go to prison once his immunity is lifted (he is a deputy in the National Assembly and in the European Parliament), although he has claimed the right to appeal to the Euro- pean Court. He has been declared bankrupt, and guilty of corruption, subor- dination of witnesses and giving false infor- mation to the tax authorities. The fact that he was a minister in the Socialist govern- ments, the chief organiser of the Radicals, a popular public figure and a friend of President Mitterrand, so that there were those who saw in him a future president of the Republic, makes his case special, although not unique. A student in a new British university is said to be writing a the- sis comparing Tapie and Robert Maxwell.

But there is a theme that runs through most of the recent cases. The investigation that is taking place into the administration of Paris is not because of the scandal of the mayor, Jean Tiberi, giving a city flat to his son and using considerable public money to improve it, although this is what hits the headlines. The real purpose of the investigation, which is hampered by offi- cialdom, is to find proof that the Paris administration is funding Jacques Chirac's party by means of faked invoices. Behind Tiberi is Chirac himself.

Alain Carignon, former minister and mayor of Grenoble, has been sentenced to five years in prison (one suspended) and a 400,000-franc fine for giving the water of his town to the Lyonnaise de l'Eau compa- ny in return for considerable sums of money used for electoral purposes. A branch of the same 'water company is believed to be directly funding Chirac's party (the Rassemblement du Peuple Republicain), and this too is part of the Paris investigation. Another of Edouard Balladur's ministers, M. Longuet, had to resign and is still under investigation for improvements made to his villa at St Tropez paid for by the locality, and for money being transferred to his party, Le Parti Republicain. A branch of Elf- Aquitaine, Elf-Gabon, used regularly to provide money to political parties in exchange for favours, until Balladur appointed a famously honest man, M. Jaf- fre, to replace Le Floch Prigent (a nomina- tion which surprised Mitterrand, perhaps because of his honesty). And the latest scandal is that immediately after the presi- dential elections officials close to the for- mer minister of defence, Francois Leotard, had their telephones tapped. The reason? To find out where Edouard Balladur had got the money for his presidential campaign.

The Socialist Party experienced exactly the same sort of scandal. The Communist Party has been visited by an investigating judge. The departments of the Essonne and the Hauts de Seine are riddled with false accounting over their building plans, thus allowing scope for illegal political party funding (and much else).

The explanation seems to be twofold. The creation of a mayor in Paris and the process of decentralisation meant that money is available in localities and that accounting is carried out there. That cohabitation between Gaullists and Socialists was possi- ble and that from 1986 it was shown that a Socialist president could work with a right- wing prime minister gave a great boost to political activity, and as French politics became more Americanised, they became more expensive. It has to be accepted that legal controls of political expenditure are ineffective. Thus there is money available; and politicians need money.

There is much that is disquieting about les affaires. In corruption cases, he who gives the money is not affected by law. So corruption is likely to continue. National disgust could lead to national populism. As Peguy might have said, everything begins in law and ends in politics.

The author is Emeritus Professor of French History at London University.