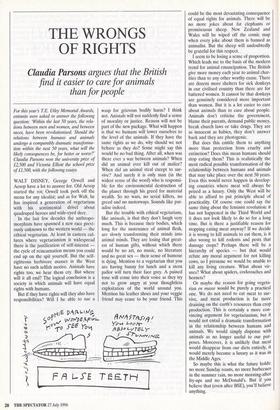 THE WRONGS OF RIGHTS

For this year's T.E. Utley Memorial Awards, entrants were asked to answer the following question: 'Within the last 50 years, the rela- tions between men and women, and between races, have been revolutionised. Should the relations between humans and animals undergo a comparably dramatic transforma- tion within the next 50 years, what will the likely consequences be, for better or worse?' Claudia Parsons won the university prize of £2,500 and Victoria Elliott the school prize of f 1,500, with the following essays.

WALT DISNEY, George Orwell and Aesop have a lot to answer for. Old Aesop started the rot; Orwell took pork off the menu for any idealist; and as for Walt, he has inspired a generation of vegetarians with his sentimental drivel about quadruped heroes and wide-eyed deer, In the last few decades the anthropo- morphists have spawned a new race previ- ously unknown to the western world — the ethical vegetarian. At least in eastern cul- tures where vegetarianism is widespread there is the justification of self-interest the cycle of reincarnation means you could end up on the spit yourself. But the self- righteous herbivore masses in the West have no such selfish motive. Animals have rights too, we hear them cry. But where will it all end? The logical conclusion is a society in which animals will have equal rights with humans.

But if they have rights will they also have responsibilities? Will I be able to sue a wasp for grievous bodily harm? I think not. Animals will not suddenly find a sense of morality or justice. Reason will not be part of the new package. What will happen is that we humans will lower ourselves to the level of the animals. If they have the same rights as we do, why should we not behave as they do? Some might say this would be no bad thing. After all, when was there ever a war between animals? When did an animal ever kill out of malice? When did an animal steal except to sur- vive? And surely it is only man (in the widest sense of the word) who is responsi- ble for the environmental destruction of the planet through his greed for material wealth. So no wars, no serial killers, no greed and no motorways. Sounds like par- adise indeed.

But the trouble with ethical vegetarians, like animals, is that they don't laugh very much. This is because their bodies, which long for the sustenance of animal flesh, are slowly transforming their minds into animal minds. They are losing that great- est of human gifts, without which there would he no art, no music, no literature and no great sex — their sense of humour is dying. Mention to a vegetarian that you are having bunny for lunch and a stern pallor will turn their face grey. A pained tone will come into their voice as they try not to grow angry at your thoughtless exploitation of the world around you. Mention his leather shoes and your veggie friend may cease to be your friend. This could be the most devastating consequence of equal rights for animals. There will be no more jokes about fat elephants or promiscuous sheep. New Zealand and Wales will be wiped off the comic map when every joke about them is banned as animalist. But the sheep will undoubtedly be grateful for this respect.

I seem to be losing a sense of proportion. Which leads me to the basis of the modern trend for animal emancipation. The British give more money each year to animal char- ities than to any other worthy cause. There are dozens more shelters for sick donkeys in our civilised country than there are for battered women. It cannot be that donkeys are genuinely considered more important than women. But it is a lot easier to care about animals than to care about people. Animals don't criticise the government, blame their parents, demand public money, break church laws or take drugs. They are as innocent as babies, they don't answer back and they are photogenic.

But does this entitle them to anything more than protection from cruelty and extinction? Does this mean humans should stop eating them? This is realistically the most radical possible transformation of the relationship between humans and animals that may take place over the next 50 years. Even this would never happen in develop- ing countries where meat will always be prized as a luxury. Only the West will be able to afford to put principle ahead of practicality. Of course one could say the same thing about the feminist revolution: it has not happened in the Third World and it does not look likely to do so for a long time. But is there a justifiable reason for stopping eating meat anyway? If we decide it is wrong to kill animals to eat them, is it also wrong to kill rodents and pests that damage crops? Perhaps there will be a hierarchy of species — but that would refute any moral argument for not killing cows, so I presume we would be unable to kill any living creature. What about vir- uses? What about spiders, cockroaches and hornets?

Or maybe the reason for going vegeta- rian en masse would be purely a practical one. We do not need to eat meat to sur- vive, and meat production is far more draining on the earth's resources than crop production. This is certainly a more con- vincing argument for vegetarianism, but it would not entail a dramatic transformation in the relationship between humans and animals. We would simply dispense with animals as no longer useful to our pur- poses. Moreover, it is unlikely that meat would disappear from our diets entirely, it would merely become a luxury as it was in the Middle Ages.

So maybe this is what the future holds: no more Sunday roasts, no more barbecues in the summer rain, no more morning-after fry-ups and no McDonald's. But if you believe that (even after BSE), you'll believe anything.