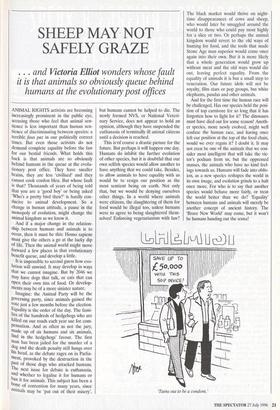 SHEEP MAY NOT SAFELY GRAZE

. . . and Victoria Elliot wonders whose fault it is that animals so obviously queue behind humans at the evolutionary post offices ANIMAL RIGHTS activists are becoming increasingly prominent in the public eye, accusing those who feel that animal sen- tience is less important than human sen- tience of discriminating between species: a terrible faux pas in our politically correct times. But even those activists do not demand complete equality before the law for our bestial friends. What holds this back is that animals are so obviously behind humans in the queue at the evolu- tionary post office. They have smaller brains, they are less 'civilised' and they cannot cook cordon bleu. But whose fault is that? Thousands of years of being told that you are a 'good boy' or being asked `Who's a pretty bird then?' is hardly con- ducive to animal development. So a change in human attitude, a pause in the monopoly of evolution, might change the animal kingdom as we know it.

And if a major change in the relation- ship between humans and animals is to occur, then it must be this: Homo sapiens must give the others a go at the lucky dip of life. Then the animal world might move forward a few places in that evolutionary benefit queue, and develop a little. It is impossible to second guess how evo- lution will unwind. It may develop in ways that we cannot imagine. But by 2046 we may have dogs that talk, or cats that can open their own tins of food. Or develop- ments may be of a more sinister nature. Imagine: the Animal Party will be the governing party, since animals gained the vote just a few months before the election. Equality is the order of the day. The fami- lies of the hundreds of hedgehogs who are killed on our roads each year sue for com- Pensation. And as often as not the jury, made up of six humans and six animals, find in the hedgehogs' favour. The first man has been jailed for the murder of a dog and the death penalty still hangs over his head, as the debate rages on in Parlia- ment, provoked by the destruction in the past of those dogs who attacked humans. The next issue for debate is euthanasia, and whether to legalise it for humans or ban it for animals. This subject has been a bone of contention for many years, since animals may be 'put out of their misery', but humans cannot be helped to die. The newly formed NVS, or National Veteri- nary Service, does not appear to hold an opinion, although they have suspended the euthanasia of terminally ill animal citizens until a decision is reached.

This is of course a drastic picture for the future. But perhaps it will happen one day. Humans do inhibit the further evolution of other species, but it is doubtful that our own selfish species would allow another to have anything that we could take. Besides, to allow animals to have equality with us would be to resign our position as the most sentient being on earth. Not only that, but we would be denying ourselves other things. In a world where animals were citizens, the slaughtering of them for food would be illegal too, unless humans were to agree to being slaughtered them- selves! Enforcing vegetarianism with law? The black market would thrive on night- time disappearances of cows and sheep, who would later be smuggled around the world to those who could pay most highly for a slice or two. Or perhaps the animal kingdom would revert to the old ways of hunting for food, and the tools that made Stone Age man superior would come once again into their own. But it is more likely that a whole generation would grow up without meat and the old ways would die out, leaving perfect equality. From the equality of animals it is but a small step to veneration. Our future idols will not be royalty, film stars or pop groups, but white elephants, pandas and other animals.

And for the first time the human race will be challenged. Has our species held the posi- tion of top carnivore for so long, that it has forgotten how to fight for it? The dinosaurs must have died out for some reason! Anoth- er species, more newly evolved, might well confuse the human race, and having once left our position at the top of the food chain, would we ever regain it? I doubt it. It may not even be one of the animals that we con- sider most intelligent that will take the vic- tor's podium from us, but the oppressed masses, the animals who have no kind feel- ings towards us. Humans will fade into obliv- ion, as a new species reshapes the world in its own image, and evolution grinds to a halt once more. For who is to say that another species would behave more fairly, or treat the world better than we do? 'Equality' between humans and animals will merely be another concept of ancient history. The 'Brave New World' may come, but it won't be humans handing out the soma!

'Turns out to be a condom.'