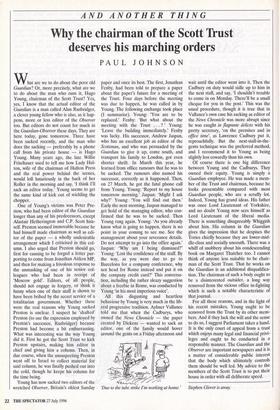 Why the chairman of the Scott Trust deserves his marching orders

PAUL JOHNSON hat are we to do about the poor old Guardian? Or, more precisely, what are we to do about the man who runs it, Hugo Young, chairman of the Scott Trust? Yes, yes, I know that the actual editor of the Guardian is a man called Alan Rusbridger, a clever young fellow who is also, as it hap- pens, more or less editor of the Observer too. But editors do not count for much in the Guardian-Observer these days. They are here today, gone tomorrow. Three have been sacked recently, and the man who does the sacking — preferably by a phone call from his private house — is Hugo Young. Many years ago, the late Willie Frischauer used to tell me how Lady Hul- ton, wife of the chairman of Hutton Press and the real power behind the scenes, would loll luxuriously in the back of her Roller in the morning and say, 'I think I'll sack an editor today.' Young seems to get the same kind of kick out of wielding the chopper.

One of Young's victims was Peter Pre- ston, who had been editor of the Guardian longer than any of his predecessors, except Alastair Hetherington and C.P. Scott him- self. Preston seemed immovable because he had himself made chairman as well as edi- tor of the paper — a wholly undesirable arrangement which I criticised in this col- umn. I also urged that Preston should go, first for causing to be forged a letter pur- porting to come from Jonathan Aitken MP, and then for making a frivolous response to the unmasking of one of his senior col- leagues who had been in receipt of 'Moscow gold'. Editors, of all people, should not engage in forgery, or think it funny when one of their staff is shown to have been bribed by the secret service of a totalitarian government. Whether these were the real reasons why Young sacked Preston is unclear. I suspect he 'shafted' Preston (to use the expression employed by Preston's successor, Rusbridger) because Preston had become a bit embarrassing. What was interesting was the way Young did it. First he got the Scott Trust to kick Preston upstairs, making him editor in chief and giving him a column. Then, in due course, when the unsuspecting Preston went off to Israel to collect material for said column, he was finally pushed out into the cold, though he keeps his column for the time being.

Young has now sacked two editors of the wretched Observer, Britain's oldest Sunday paper and once its best. The first, Jonathan Fenby, had been told to prepare a paper about the paper's future for a meeting of the Trust. Four days before the meeting was due to happen, he was called in by Young. The following exchange took place (I summarise). Young: 'You are to be replaced.' Fenby: 'But what about the meeting with the Trust . . . ? ' Young: 'Leave the building immediately.' Fenby was lucky. His successor, Andrew Jaspan, who has an excellent job as editor of the Scotsman, and who was persuaded by the Guardian to give it up, come south, and transport his family to London, got even shorter shrift. In March this year, he learned from office rumours that he was to be sacked. The rumours also named his successor, correctly as it happened. Then, on 27 March, he got the fatal phone call from Young. Young: 'Report to my house tomorrow morning.' Jaspan: 'Might I ask why?' Young: 'You will find out then.' Early the next morning, Jaspan managed to get hold of the managing editor, who con- firmed that he was to be sacked. Then Young rang again. Young: 'As you already know what is going to happen, there is no point in your coming to see me. See the management about your severance details. Do not attempt to go into the office again.' Jaspan: 'Why am I being dismissed?' Young: 'Lost the confidence of the staff. By the way, as you were due to go to Barcelona for a company conference, why not head for Rome instead and put it on the company credit card?' This conversa- tion, including the rather sleazy suggestion about a freebie in Rome, was conducted by Young 'in his most imperious voice'.

All this disgusting and heartless behaviour by Young is very much in the lib- eral progressive tradition. Aylmer Valiance told me that when the Cadburys, who owned the News Chronicle — the paper created by Dickens — wanted to sack an editor, one of the family would hover around the gents on a Friday afternoon and

Due to the tube strike I'm working at home.'

wait until the editor went into it. Then the Cadbury on duty would sidle up to him in the next stall, and say, 'I shouldn't trouble to come in on Monday. There'll be a small cheque for you in the post.' This was the usual procedure, though it is true that in Vallance's own case his sacking as editor of the News Chronicle was more abrupt since he was caught in flagrante delicto with his pretty secretary, 'on the premises and in office time', as Lawrence Cadbury put it, reproachfully. But the next-stall-in-the- gents technique was the preferred method, and I recommend it to Young as being slightly less cowardly than his own.

Of course there is one big difference between Young and the Cadburys. They owned their equity. Young is simply a Guardian employee. He was made a mem- ber of the Trust and chairman, because he looks presentable compared with most Guardian people, who are a scruffy lot. Indeed, Young has grand ideas. His father was once Lord Lieutenant of Yorkshire, and no doubt Young now sees himself as Lord Lieutenant of the liberal media. There is something disagreeably Whiggish about him. His column in the Guardian gives the impression that he despises the Tories chiefly because they are lower-mid- dle-class and socially uncouth. There was a whiff of snobbery about his condescending book on Margaret Thatcher too. I cannot think of anyone less suitable to be chair- man of the Scott Trust. That he works on the Guardian is an additional disqualifica- tion. The chairman of such a body ought to be a disinterested outsider, a long way removed from the vicious office in-fighting which is such a notable characteristic of that journal.

For all these reasons, and in the light of his recent mistakes, Young ought to be removed from the Trust by its other mem- bers. And if they lack the will and the sense to do so, I suggest Parliament takes a hand. It is the only court of appeal from a trust which enjoys many legal and financial privi- leges and ought to be conducted in a responsible manner. The Guardian and the Observer are important newspapers and it is a matter of considerable public interest that the body which ultimately controls them should be well led. My advice to the members of the Scott Trust is to put their house in order with all deliberate speed.

Stephen Glover is away.