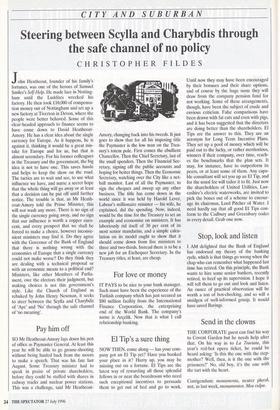 John Heathcoat, founder of his family's fortunes, was one of the heroes of Samuel Smiles's Self-Help. He made lace in Notting- ham until the Luddites wrecked his factory. He then took £10,000 of compensa- tion money out of Nottingham and set up a new factory at Tiverton in Devon, where the people were better behaved. Some of this clear-headed approach to finance seems to have come down to David Heathcoat- Amory. He has a clear idea about the single currency for Europe. As it happens, he is against it, thinking it would be a great mis- take for Europe and for us, but that is almost secondary. For his former colleagues in the Treasury and the government, the big idea is not to have one. This saves hassle and helps to keep the show on the road. The tactics are to wait and see, to use what influence we have, and nurse a secret hope that the whole thing will go away or at least that a decision can be put off until further notice. The trouble is that, as Mr Heath- coat-Amory told the Prime Minister, this will not wash any more. There is no sign of the single currency going away, and no sign that our influence is worth a copper euro- cent, and every prospect that we shall be forced to make a choice, however inconve- nient ministers may find it. Do they agree with the Governor of the Bank of England that there is nothing wrong with the economies of Europe that a single currency could not make worse? Do they think they are dealing with a technical proposal or with an economic means to a political end? Ministers, like other Members of Parlia- ment, owe the electors their judgment, but making choices is not this government's style. Like the Church of England as rebuked by John Henry Newman, it seeks to steer between the Scylla and Charybdis of 'Aye' and 'No' through the safe channel of `no meaning'.

SO Mr Heathcoat-Amory lays down his pen of office as Paymaster General. At least this year he will be able to go grouse-shooting without being hauled back from the moors to make a speech. That was his fate last August. Some Treasury minister had to speak in praise of private shareholders, before they could be stuffed with shares in railway tracks and nuclear power stations. This was a challenge, said Mr Heathcoat- Amory, changing back into his tweeds. It just goes to show that for all his imposing title the Paymaster is the low man on the Trea- sury's totem pole. First comes the ebullient Chancellor. Then the Chief Secretary, last of the small spenders. Then the Financial Sec- retary, signing off the public accounts and hoping for better things. Then the Economic Secretary, watching over the City like a net- ball monitor. Last of all the Paymaster, to sign the cheques and sweep up any other business. The title has come down in the world since it was held by Harold Lever, Labour's millionaire minister — his wife, he explained, did the spending. Now, indeed, would be the time for the Treasury to set an example and economise on ministers. It has laboriously rid itself of 30 per cent of its most senior mandarins, and a simple calcu- lation on its model ought to show that it should come down from five ministers to three and two-thirds. Instead there is to be a new job for an Exchequer Secretary. In the Treasury titles, at least, are cheap.

For love or money

IT PAYS to be nice to your bank manager. Such must have been the experience of the Turkish company which has just secured an $80 million facility from the International Finance Corporation, the enterprising end of the World Bank. The company's name is Arcelik. Now that is what I call relationship banking.

El Tip's a sure thing

NOW THEN, come along — has your com- pany got an El Tip yet? Have you booked your place in it? Hurry up, you may be missing out on a fortune. El Tips are the latest way of rewarding all those splendid fellows in or near the boardroom who need such exceptional incentives to persuade them to get out of bed and go to work.

Until now they may have been encouraged by their bonuses and their share options, and of course by the huge sums they will draw from the company pension fund for not working. Some of these arrangements, though, have been the subject of crude and envious criticism. False comparisons have been drawn with fat cats and even with pigs, and it has been suggested that the directors are doing better than the shareholders. El Tips are the answer to this. They are an acronym for Long Term Incentive Plans. They set up a pool of money which will be paid out to the lucky, or rather meritorious, winners if their company, over time, reach- es the benchmarks that the plan sets. It may, for instance, have to outperform its peers, or at least some of them. Any capa- ble consultant will set you up an El Tip, and for the usual fee will tailor it to fit. Just now the shareholders of United Utilities, Lan- cashire's electric waterworks, are invited to pick the bones out of a scheme to encour- age its chairman, Lord Pitcher of Water. I need hardly say that all good El Tips con- form to the Cadbury and Greenbury codes in every detail. Grab one now.

I AM delighted that the Bank of England has endorsed my theory of the banking cycle, which is that things go wrong when the chap who can remember what happened last time has retired. On this principle, the Bank wants to hire some senior bankers, recently retired, to beef up its supervision. I hope it will tell them to go out and look and listen. An ounce of practical observation will be worth a ton of box-checking, and so will a smidgen of well-informed gossip. It would have saved Barings.

Send in the clowns

THE CORPORATE guest can find his way to Covent Garden but he needs help after that. On his way in to La Traviata, this year's red-hot opera ticket, he could be heard asking: 'Is this the one with the step- mother? Well, then, is it the one with the prisoners?' No, old boy, it's the one with the tart with the heart.