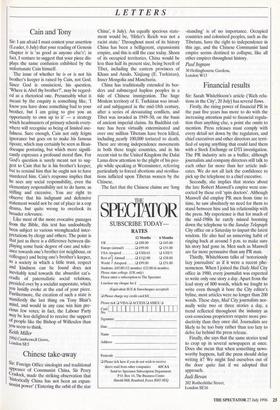 Firstly, the rising power of financial PR in the past five years has more to do with the increasing attention paid to financial regula- tion than anything else, a point she omits to mention. Press releases must comply with every detail set down by the regulators, and chief executives and other directors are terri- fied of saying anything that could land them with a Stock Exchange or DTI investigation. The PR industry acts as a buffer, although journalists and company directors still talk to each other far more than her article indi- cates. We do not all lack the confidence to pick up the telephone to a chief executive.

Secondly, she implies that stories about the late Robert Maxwell's empire were con- cocted by these evil 'spin doctors'. Although Maxwell did employ PR men from time to time, he saw absolutely no need for them to stand between him and his relationship with the press. My experience is that for much of the mid-1980s he rarely missed booming down the telephone to the Sunday Telegraph City office on a Saturday to impart the latest wisdom. He also had an unnerving habit of ringing back at around 5 p.m. to make sure his story had gone in. Men such as Maxwell are far more persuasive than any PR man.

Thirdly, Whitebloom talks of 'notoriously lazy journalists' as if it were a recent phe- nomenon. When I joined the Daily Mail City office in 1980, every journalist was expected to write only one story a day. Apart from the lead story of 800 words, which we fought to write even though it bore the City editor's byline, most articles were no longer than 200 words. These days, Mail City journalists nor- mally write two or three stories a day, a trend reflected throughout the industry as cost-conscious proprietors require more pro- ductivity than they once did. Journalists are likely to be too busy rather than too lazy to delve far behind the press release.

Finally, she says that the same stories tend to crop up in several newspapers at once. Does she mean that when something news- worthy happens, half the press should delay writing it? We might find ourselves out of the door quite fast if we adopted that approach.