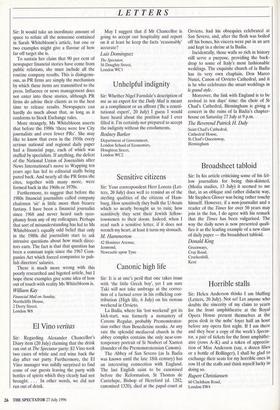 Sir: It would take an inordinate amount of space to

refute all the nonsense contained in Sarah Whitebloom's article, but one or two examples might give a flavour of how far off target she is.

To sustain her claim that 90 per cent of newspaper financial stories have come from public relations, she must include all the routine company results. This is disingenu- ous, as PR firms are simply the mechanism by which these items are transmitted to the press. Influence or news management does not enter into these stories, although PR firms do advise their clients as to the best time to release results. Newspapers can hardly do much about that, as long as it conforms to Stock Exchange rules.

More strangely, Ms Whitebloom asserts that before the 1980s 'there were few City journalists and even fewer PRs'. She may like to know that even in the 1950s every serious national and regional daily paper had a financial page, each of which was staffed by specialists, If anything, the defeat of the National Union of Journalists after News International's move to Wapping ten years ago has led to editorial staffs being pared back. And nearly all the PR firms she cites, together with many more, were formed back in the 1960s or 1970s.

Furthermore, to suggest that before the 1980s financial journalists called company chairmen 'sir' is little more than bizarre fantasy. I have been a financial journalist since 1968 and never heard such syco- phancy from any of my colleagues. Perhaps that sort of misunderstanding has led to Ms Whitebloom's equally odd belief that only in the 1980s did journalists start to ask intrusive questions about how much direc- tors earn. The fact is that that question has been a constant topic since the 1967 Com- panies Act which forced companies to pub- lish directors' salaries.

There is much more wrong with this poorly researched and bigoted article, but I hope these examples give some idea of how out of touch with reality Ms Whitebloom is.