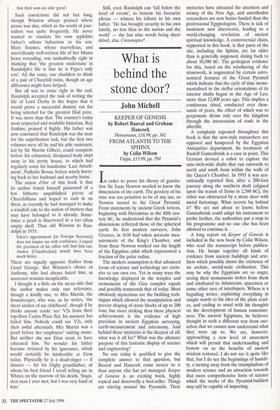 What is behind the stone door?

KEEPER OF GENESIS by Robert Bauval and Graham Hancock Heinemann, f16.99, pp. 362 FROM ATLANTIS TO THE SPHINX by Colin Wilson Virgin, £15.99, pp. 294 In order to prove his theory of gravita- tion Sir Isaac Newton needed to know the dimensions of the earth. The geodesy of his time was too primitive to be of any use, so Newton turned to the Great Pyramid. From statements by ancient Greek writers, beginning with Herodotus in the fifth cen- tury BC, he understood that the Pyramid's dimensions reflected those of the spherical earth. Its first modern surveyor, John Greaves, in 1638 had taken accurate mea- surements of the King's Chamber, and from these Newton worked out the length of the Egyptian cubit which represented a fraction of the polar radius.

The modern assumption is that advanced forms of science and technology are exclu- sive to our own era. Yet in many ways the knowledge displayed in the temples and monuments of the Giza complex equals and possibly transcends that of today. Most obviously mysterious are the building tech- niques which allowed the manipulation and precise shaping of stone blocks of up to 200 tons; but more striking than these physical achievements is the evidence of high precision in ancient Egyptian surveying, earth-measurement and astronomy. And behind these mysteries is the deepest of all: what was it all for? What was the ultimate purpose of this fantastic display of science and engineering?

No one today is qualified to give the complete answer to that question, but Bauval and Hancock come nearer to it than anyone else has yet managed. Keeper of Genesis is an exciting book, highly topical and deservedly a best-seller. Things are stirring around the Pyramids. Their

mysteries have attracted the attention and money of the New Age, and unorthodox researchers are now better funded than the professional Egyptologists. There is talk of imminent new discoveries, leading to a world-changing revelation of ancient spiritual knowledge. A controversial claim, supported in this book, is that parts of the site, including the Sphinx, are far older than is generally supposed, dating back to about 10,500 BC. The geological evidence for this, based on the weathering of the stonework, is augmented by certain astro- nomical features of the Great Pyramid which indicate that the cycle of time monu- mentalised in the stellar orientations of its interior shafts began in the Age of Leo, more than 12,000 years ago. This implies a continuous ritual, conducted over thou- sands of years, the effect of which was to perpetuate divine rule over the kingdom through the intercession of souls in the afterlife.

A complaint repeated throughout this book is that the new-style researchers are opposed and hampered by the Egyptian Antiquities department. Its treatment of Rudolf Gantenbrink is a case in point. This German devised a robot to explore the nine-inch-wide shafts that run outwards to north and south from within the walls of the Queen's Chamber. In 1993 it was sen- sationally reported that, after a 200-foot journey along the southern shaft (aligned upon the transit of Sirius in 2,500 BC), the robot was obstructed by a stone door with metal fastenings. What secrets lay behind it? We are not about to know; before Gantenbrink could adapt his instrument to probe further, the authorities put a stop to his programme and no one else has been allowed to continue it.

A long report on Keeper of Genesis is included in the new book by Colin Wilson, who read the manuscript before publica- tion. He lumps together all kinds of evidence from ancient buildings and arte- facts which possibly shows the existence of an archaic, world-wide civilisation. This may be why the Egyptians are so angry, seeing their monuments stolen from them and attributed to Atlanteans, spacemen or some other race of interlopers. Wilson is a beguiling writer, explaining everything in simple words to his idea of the plain read- er, and ending as usual with his thoughts on the development of human conscious- ness. The ancient Egyptians, he believes, thought in such a different way from our- selves that we cannot now understand what they were up to. We are, however, approaching a new level of awareness which will permit that understanding and bestow on us the benefits of ancient wisdom restored. I do not see it quite like that, but I do see the beginnings of humili- ty, a turning away from the triumphalism of modem science and an attraction towards that more comprehensive form of science which the works of the Pyramid-builders may still be capable of imparting.