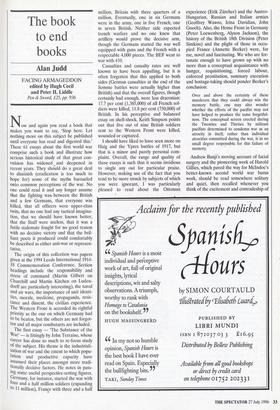 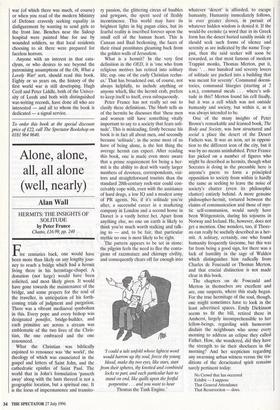 The book to end books

Alan Judd FACING ARMAGEDDON edited by Hugh Cecil and Peter H. Liddle Pen & Sword, £25, pp. 936 Now and again you read a book that makes you want to say, 'Stop here. Let nothing more on this subject be published until everyone has read and digested this.' These 61 essays about the first world war comprise such a book and illustrate how serious historical study of that great con- vulsion has widened and deepened in recent years. They should do a great deal to diminish (eradication is too much to hope for) some of the myths barnacled onto common perceptions of the war. No one could read it and any longer assume that the fighting was between the British and a few Germans, that everyone was killed, that all officers were upper-class twits, that no one had any tactical imagina- tion, that we should have known better, that the Staff were useless, that it was a futile stalemate fought for no good reason with no decisive victory and that the bril- liant poets it produced could comfortably be described as either anti-war or represen- tative.

The origin of this collection was papers given at the 1994 Leeds International 1914- 18 Commemoration Conference. Section headings include the responsibility and stress of command (Martin Gilbert on Churchill and Martin Kitchen on Luden- dorff are particularly interesting), the naval and air wars, the importance of unit identi- ties, morale, medicine, propaganda, resis- tance and dissent, the civilian experience. The Western Front is accorded its rightful Priority as the one on which Germany had to be beaten, but the others are not forgot- ten and all major combatants are included. The first essay — The Substance of the War' — is fittingly by John Terraine, whose career has done so much to re-focus study of the subject. His theme is the industriali- sation of war and the extent to which popu- lation and productive capacity have assumed their places amongst more tradi- tionally decisive factors. He notes in pass- ing some useful perspective-setting figures. Germany, for instance, started the war with four and a half million soldiers (expanding to 11 million), France with three and a half million, Britain with three quarters of a million. Eventually, one in six Germans were in the army, one in five French, one in seven British. Neither side expected trench warfare and no one knew that artillery would prove the decisive arm, though the Germans started the war well equipped with guns and the French with a respectable 4,000 pieces. The BEF went to war with 410.

Casualties and casualty rates are well known to have been appalling, but it is often forgotten that this applied to both sides (German casualties at the end of the Somme battles were actually higher than British) and that the overall figures, though certainly bad enough, were less draconian: 17.7 per cent (1,385,000) of all French sol- diers were killed, 11.8 per cent (750,000) of British. In his perceptive and balanced essay on shell-shock, Keith Simpson points out that five out of nine British soldiers sent to the Western Front were killed, wounded or captured.

I should have liked to have seen more on Haig and the Ypres battles of 1917, but that is a minor and purely personal com- plaint. Overall, the range and quality of these essays is such that it seems invidious to single any out for particular praise. However, making use of the fact that you tend to be more struck by subjects of which you were ignorant, I was particularly pleased to • read about the Ottoman experience (Erik Ztircher) and the Austro- Hungarian, Russian and Italian armies (Geoffrey Wawro, Irina Davidian, John Gooch). Also, the Home Front in Germany (Peter Loewenberg, Alyson Jackson), the history of the British 18th Division (Peter Simkins) and the plight of those in occu- pied France (Annette Becker) were, for me, novel and fascinating. We who are for- tunate enough to have grown up with no more than a conceptual acquaintance with hunger, requisitioning, forced labour, enforced prostitution, summary execution and hostage-taking should ponder Becker's conclusion: Over and above the certainty of these murderers that they could always win the memory battle, one may also wonder whether the efforts of the pacifist may not have helped to produce the same forgetful. ness. The conceptual screen erected during the Twenties and Thirties by militant pacifists determined to condemn war as an atrocity in itself, rather than individual atrocities committed during the war, is in no small degree responsible for this failure of memory.

Andrew Banji's moving account of facial surgery and the pioneering work of Harold Gillies, which paved the way for Mandoe's better-known second world war burns work, should be read somewhere solitary and quiet, then recalled whenever you think of the excitement and comradeship of war (of which there was much, of course) or when you read of the modern Ministry of Defence cravenly seeking equality in disfigurement by wanting to send girls to the front line. Benches near the Sidcup hospital were painted blue for use by wounded soldiers, so that local residents choosing to sit there were prepared for faceless horrors.

Anyone with an interest in that cata- clysm, or who desires to see beyond the patronising assumptions of the Oh, What a Lovely Warl sort, should read this book. Eighty or so years on, the history of the first world war is still developing. Hugh Cecil and Peter Liddle, both of the Univer- sity of Leeds and both with distinguished war-writing records, have done all who are interested — and all to whom the book is dedicated — a signal service.