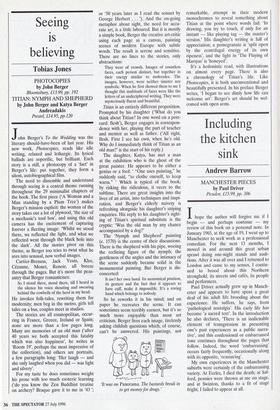 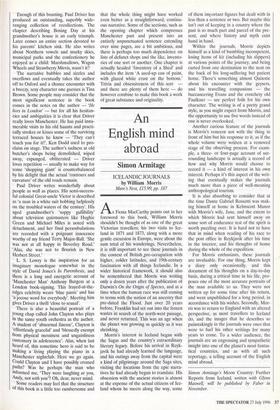 Including the kitchen sink

Ihope the author will forgive me if I begin — and perhaps continue — my review of this book on a personal note. In January 1965, at the age of 19, I went up to Manchester to seek work as a professional comedian. For the next 13 months, I moved in and around this great urban sprawl doing one-night stands and audi- tions. After it was all over and I returned to London and came to my senses, I contin- ued to brood about this Northern stronghold, its streets and cafés, its people and performers.

Paul Driver actually grew up in Manch- ester and appears to have spent a great deal of his adult life brooding about the experience. He suffers, he says, from 'pathological nostalgia'. His early life has become 'a sacred text'. In the introduction he also declares, 'There is an inalienable element of transgression in presenting one's past experiences as a public narra- tive', and this confessional or embarrassed tone continues throughout the pages that follow. Indeed, the word 'embarrassing' occurs fairly frequently, occasionally along with its opposite, 'reassuring'. My own experiences in the Manchester suburbs were certainly of the embarrassing variety. At Eccles, I died the death; at Sal- ford, pennies were thrown at me on stage, and at Swinton, thanks to a fit of stage fright, I failed to appear at all. Enough of this boasting. Paul Driver has produced an outstanding, superbly wide- ranging collection of recollections. The chapter describing Boxing Day at his grandmother's house is an early triumph. Later comes an entire section devoted to his parents' kitchen sink. He also writes about Northern vowels and murky skies, municipal parks and the confectionery he enjoyed as a child: Marshmallows, Wagon Wheels and Strawberry Miwis, wasn't it?

The narrative bubbles and sizzles and overflows and eventually takes the author off to Oxford and a chance encounter with a breezy, sexy character one guesses is Tina Brown. Some people may consider that the most significant sentence in the book comes in the notes on the author — 'He lives in London' — but for all his hesitan- cies and ambiguities it is clear that Driver really loves Manchester. He has paid innu- merable visits to his old haunts and practi- cally strokes or kisses some of the surviving terraced houses he knew — 'They can't touch you for it!', Ken Dodd used to pro- claim on stage. The author's sadness at old butcher's shops being demolished, wiped away, expunged, obliterated — Driver loves repetition — usually to make way for some 'shopping giant' is counterbalanced by his delight that the actual 'contours and curvature' of the old roads remain.

Paul Driver writes wonderfully about people as well as places. His semi-success- ful colonial Great-uncle Victor is described as 'a man in a white suit bobbing helplessly on the troubled waters of the century'. His aged grandmother's 'soppy gullibility' about television quizmasters like Hughie Green and Michael Miles is noted with detachment, and her final perambulations are recorded with a poignant innocence worthy of my friend Terry Major-Ball. 'She was not at all happy in Beverley Road.' 'Alas, she was not to flourish in New Herbert Street.'

L. S. Lowry is the inspiration for an imaginary monologue somewhat in the style of David Jones's In Parenthesis, and there is a long and energetic account of 'Manchester Man' Anthony Burgess at a London book-signing. This frayed-at-the- edges celebrity wears 'blue pants' and has 'a jocose word for everybody'. Meeting him gives Driver a thrill 'close to sexual'.

There is also a beautiful portrait of a young chap called John Clayton who plays In the same youth orchestra as the author. A student of 'abnormal finesse', Clayton is 'effortlessly graceful' and 'blessedly exempt from physical messiness and ungainliness customary in adolescence'. Alas, when last heard of, this sometime hero is said to be making a living playing the piano in a Manchester nightclub. Here we go again. Could Clayton and I have possibly crossed paths? Was he perhaps the man who informed me, 'They were laughing at you, Andy, not with you'? Oh, dear, never mind. Some readers may feel that the structure of this book is a little too cumbersome and that the whole thing might have worked even better as a straightforward, continu- ous narrative. Some of the sections, such as the opening chapter which compresses Manchester past and present into an entirely unpunctuated sentence extending over nine pages, are a bit ambitious, and there is perhaps too much dependence on lists of defunct shops and the like, invento- ries of one sort or another. One chapter is actually headed 'Inventory of a Shed' and includes the item 'A used-up can of paint, with glazed white crust on the bottom.' Trivia and obsessiveness of this sort and there are plenty of them here — do however combine to make this book a work of great substance and originality.