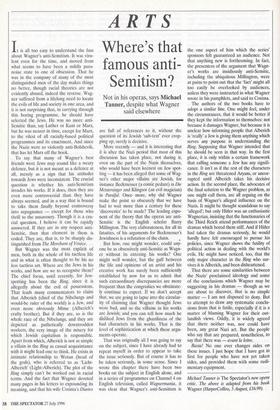 Not in his operas, says Michael Tanner, despite what Wagner said elsewhere It is all too easy to understand the fuss about Wagner's anti-Semitism. It was viru- lent even for the time, and moved from what seems to have been a mildly para- noiac state to one of obsession. That he was in the company of many of the most distinguished men of the day makes things no better, though racial theories are not evidently absurd, indeed the reverse. Wag- ner suffered from a lifelong need to locate the evils of life and society in one area, and it is not surprising that, in carrying through this boring programme, he should have selected the Jews. He was no more anti- Semitic than, say Luther or Kant or Marx, but he was nearer in time, except for Marx, to the vilest of all racially-based political programmes and its enactment. And since the Nazis were so violently anti-Bolshevik, that has let Marx off the hook.

To say that many of Wagner's best friends were Jews may sound like a weary defence, but it is not meant as a defence at all, merely as a sign that his attitudes towards Jews were inconsistent. The crucial question is whether his anti-Semitism invades his works. If it does, then they are even more controversial than they have always seemed, and in a way that is bound to take them finally beyond controversy into repugnance — except for those who thrill to the unsavoury. Though it is a cru- cial question, I believe it can be rapidly answered. If they are in any respect anti- Semitic, then that element in them is coded. They are, that is, to be sharply dis- tinguished from The Merchant of Venice.

But Wagner was the most explicit of men, both in the whole of his tactless life and in what is often thought to be his no less tactless art. Where are the Jews in his works, and how are we to recognise them? The chief focus, until recently, for Jew- spotting has been the Ring, since it is allegedly about the evil of possessions. That leads many commentators to claim that Alberich (chief of the Nibelungs and would-be ruler of the world) is a Jew, and even more obviously Mime (Alberich's crafty brother). But if they are, so is the whole race of the Nibelungs, and they are depicted as pathetically downtrodden workers, the very image of the misery for which Jewish capitalism is responsible. Apart from which, Alberich is not as simple a villain in the Ring as casual acquaintance with it might lead one to think. He exists in intimate relationship to Wotan (head of the gods), who is referred to as `Licht- Alberich' (Light-Alberich). The plot of the Ring simply can't be worked out in racial terms. And the fact that Wagner devoted many pages in his letters to expounding its meaning, and that his wife Cosima's Diaries are full of references to it, without the question of its Jewish 'sub-text' ever crop- ping up, surely is decisive.

More recently — and it is interesting that it is after the Nazi period that most of this discussion has taken place, not during it, even on the part of the Nazis themselves, who would have been keenest on Jew spot- ting — it has been alleged that some of Wag- ner's other major villains are Jewish, for instance Beckmesser (a comic pedant) in Die Meistersinger and Klingsor (an evil magician) in Parsifal. Once more, why did Wagner make the point so obscurely that we have had to wait more than a century for these `discoveries' to be made? The leading expo- nent of the theory that the operas are anti- Semitic is the English scholar Barry Millington. The very elaborateness, for all its fatuities, of his arguments for Beckmesser's Jewishness is a refutation of the claim.

But how, one might wonder, could any- one be as obsessively anti-Semitic as Wagn- er without its entering his works? One might well wonder, but the gulf between the life and opinions of an artist and his creative work has surely been sufficiently established by now for us to admit that such extraordinary discrepancies are more frequent than the congruities we obstinate- ly continue to expect. If we don't accept that, we are going to lapse into the circular- ity of claiming that Wagner thought Jews were bad, and so the villains in his works are Jewish; and you can tell how much he disliked Jews from the ghastliness of the bad characters in his works. That is the level of sophistication at which these argu- ments operate.

That was originally all I was going to say on the subject, since I have already had to repeat myself in order to appear to take the issue seriously. But of course it has to be taken seriously, in some sense. Since I wrote this chapter there have been two books on the subject in English alone, and in a series of programmes on Channel 4 on English television, called Wagnermania, it was clear that Wagner's anti-Semitism is

the one aspect of him which the series' sponsors felt guaranteed an audience. Not that anything new is forthcoming. In fact, the presenters of the argument that Wagn- er's works are insidiously anti-Semitic, including the ubiquitous Millington, were at pains to point out that the 'fact' might all too easily be overlooked by audiences, unless they were instructed in what Wagner wrote in his pamphlets, and said to Cosima.

The authors of the two books have to adopt a similar line. One might feel, under the circumstances, that it would be better if they kept the information to themselves: not because it damages Wagner, but because it is unclear how informing people that Alberich is 'really' a Jew is giving them anything which serves any purpose in understanding the Ring. Supposing that Wagner intended that he should be seen in that way. In the first place, it is only within a certain framework that calling someone a Jew has any signifi- cance. It isn't as if the rest of the characters in the Ring are threatened Aryans, or uncor- rupted until Alberich takes his decisive action. In the second place, the advocates of the final solution to the Wagner problem, as one might call them, are all arguing on the basis of Wagner's alleged influence on the Nazis. It might be thought scandalous to say `alleged': but only Hitler was an enthusiastic Wagnerian, insisting that the functionaries of the Third Reich attend performances of the dramas which bored them stiff. And if Hitler had taken the dramas seriously, he would hardly have felt encouraged to pursue his policies, since Wagner shows the futility of political action in dealing with the world's evils. He might have noticed, too, that the only major character in the Ring who sur- vives it is Alberich, and been disheartened.

That there are some similarities between the Nazis' proclaimed ideology and some of the conclusions which Wagner may be suggesting in his dramas — though as we are about to discover, that is no simple matter — I am not disposed to deny. But to attempt to draw any systematic conclu- sions from that is futile, especially if it is a matter of blaming Wagner for their out- landish views. Oddly, it is widely agreed that there neither was, nor could have been, any great Nazi art. But the people who say that are prepared, nonetheless, to say that there was — avant la lettre.

Basta! No one ever changes sides on these issues. I just hope that I have got in first for people who have not yet taken sides, and provided them with some rudi- mentary equipment.

Michael Tanner is The Spectator's new opera critic. The above is adapted from his book Wagner (HarperCollins, 5 August, E16.99).